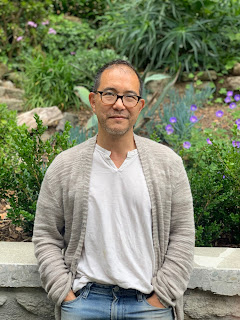 James Sie is the author of the new young adult novel All Kinds of Other. He also has written the novel Still Life Las Vegas, and his work has appeared in The Rumpus and The Advocate. In addition, he's a voiceover artist, and he lives in Los Angeles.

Q: You note that a visit from a friend and his son inspired you to write this book. Can you say more about that, and about how you created your characters Jules and Jack?

A: I actually used much of the real-life situation of my friend and his son for the starting part of my book.

My friend was a fellow actor who was coming to Los Angeles from Chicago to see what headway he could make in his film/television career in Hollywood for six months, and his son, who had recently come out as trans masculine, flew out with him to attend high school here and experience what it would be like to be known only as a boy.

He was the starting part. I wanted to capture his boldness, his confidence and the unique situation he was in. Hesitant, teenage me would never have been so sure about anything.

And then this idea of these two boys, temperamentally so different, from such different circumstances, forming a connection, became the book I wanted to write. Jules, in a lot of ways, was a proxy for my teenage self. 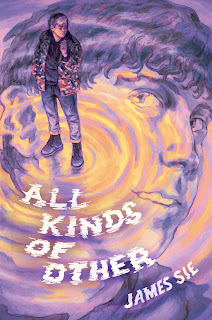 A: Yes! I knew how I wanted it to end, and I actually did write the end before I was three-quarters of the way through.

My writing group posed it as an exercise—write the last page of your novel—as a way of sharpening our focus on where we were heading. That page didn’t change much by the time I reached the end, surprisingly!

I’m not big on outlining, but I’d have all of these little islands—milestones—of events that I knew I wanted to get to, laid out in a line, and the exciting part is figuring out how to jump onto each island.

Q: The Kirkus Review of the book says, "Although the author does not shy away from depicting transphobia and bullying—including the use of a slur—the overall tone is hopeful, and this is, in the end, a realistic, sensitive depiction of a trans boy." What do you think of that description?

A: It’s a pretty good one. The hardest part of the book was getting the balance of hope and joy with the pretty significant challenges that queer kids, especially trans and non-binary kids, face each day. I didn’t want to minimize those, you know? And I think to show a character overcoming those challenges and growing from them makes their happiness all that more earned, and significant.

But I know that this balance will be perceived differently for every reader, depending on their life experience, and some might think it tilts too far in one direction or another. I know I tend to be attracted to the darker hues of life, so my tolerance for that is maybe a bit higher! But I hope at least that it’s perceived as an honest reflection.

A: Jack is a lot of things outside the perceived “norm” in America—he’s trans, he’s hapa, part Indian, part a lot of things, he’s queer—and he feels like he doesn’t fit in any of the boxes people want to put him in, that he’d check off the “other” box in most things.

What I want to get across is how that is a quality to be celebrated and cherished, not denigrated. There is an infinite variety of human expression, and it baffles me as to why people are so afraid of that they would try to legislate it out of existence. We get excited when we discover a new species of frog in the Amazon rain forest, but stray outside the rigid compartments of sexuality or gender, and people start clutching their pearls!

I’m hoping it’s a generational thing, and that this upcoming generation can embrace differences more easily.

A: Mostly right now, I’m working on selling this book! But I do have some projects I want to get back to. There’s a novel about a family of coyotes in Los Angeles that’s half done, and a story about a family of grifters that I’m starting to limn. Fingers crossed...

A: I’m excited that the paperback version of my first novel, Still Life Las Vegas, will finally be coming out soon! It’s not YA, but it does feature an 18-year-old boy as one of its perspectives, and it’s got beautiful graphic novel sections illustrated by Sungyoon Choi. It’ll be nice to see that one coming around again!