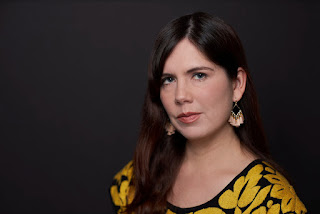 Elizabeth Gonzalez James is the author of the new novel Mona at Sea. Her work has appeared in a variety of publications, including The Rumpus and The Idaho Review. She lives in Oakland, California.

Q: What inspired you to write Mona at Sea, and how did you create your character Mona?

A: Mona at Sea was inspired by my own experience of long-term unemployment during the Great Recession.

I graduated from an MBA program just a few months after the Wall Street meltdown of 2008, and it was a terrible, terrible time for people like me who were looking for jobs in finance.

While my failure to get a job was not as spectacular (or funny) as Mona's, I was out of work for over a year. I applied for between 300-400 jobs and got nothing, zip, nada.

Then I got pregnant, because my husband and I were living in his parents' basement and this was clearly a perfect time to add some more chaos to the mix. And I started writing around that time as a way to give me something to do other than change diapers, and as a way to channel my frustrations about my job search into something productive.

In 2011 I hit on the idea of wanting to write a novel about someone who's unemployed and can't get her bearings, and thus Mona was born.

Q: The writer Cristina Garcia said of the book, "Mona at Sea is a hilarious, high-octane novel about coming into one's own without coming undone." What do you think of that assessment?

A: I'm relieved she found the book hilarious. I think I'm funny, but I also don't think my opinion should be trusted. High-octane? Sure. The stakes are not exactly life-and-death, but Mona's sanity, happiness, and sense of herself hang in the balance. When you're in your early 20s, that's kind of all you have. 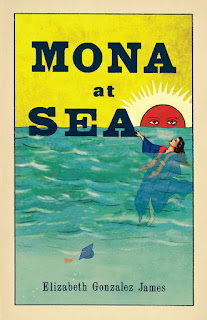 And as for "coming into one's own without coming undone" I think she's hit the nail on the head. It's absolutely a coming-of-age novel, and figuring out who you are and what you want is a fraught process, even when you're not unemployed and mired in a crippling economic crisis.

Add those things to the mix and yeah, it's a rough time and there are a lot of things that can go wrong.

Q: What do you think the book says about the 2008 recession and its impact on young adults?

A: I hoped to paint a really clear picture of what it felt like to be in the middle of that experience.

And it was kind of weird to go through the Recession as someone with a newly-minted business degree. We were sitting through classes in corporate finance and mergers and acquisitions, just watching everything fall apart before our eyes.

It was scary and surreal, but I was also grateful to have a functional knowledge of macroeconomics and whatnot, so that I could sort-of understand everything that was going on.

Mona also understands exactly what's going on, and this just feeds her compulsion to run her mouth and let everyone know how bitter she is. I hope that the story will be relatable to a lot of people, and will hopefully help bring a little comfort and levity to those who are unemployed now, as it's such a lonely and dispiriting experience.

A: So many, oh my goodness. One Hundred Years of Solitude, The Great Gatsby, everything by Kurt Vonnegut, everything by George Saunders, Housekeeping and Gilead by Marilynne Robinson, The Summer Book by Tove Jansson, The Notebooks of Malte Laurids Brigge, The Trial, and everything by Jesmyn Ward and Valeria Luiselli.

A: I am working on my second novel, a magical realism Western based on the life of my great-grandfather who was a bandido in South Texas and Mexico in the 1800s.