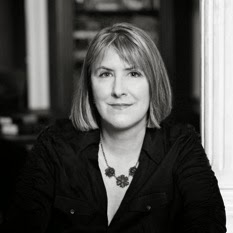 Margaret Talbot is the author of The Entertainer: Movies, Magic, and My Father's Twentieth Century, which focuses on the life of her father, actor Lyle Talbot. She is a staff writer for The New Yorker, and has worked for the Times Magazine and The New Republic. She lives in Washington, D.C.
Q: Why did you decide to write about your father’s life, and did you have trouble balancing your roles as daughter and historian/biographer as you write the book?
A: Since my father was so much older than most fathers I knew—he was born in 1902 and was almost 60 when I was born—I always had this sense of him as a vital, living link to history, especially the kind of cultural and social history I loved.
He’d been part of touring entertainments in the teens and ‘20s—carnivals and magic shows and hypnotism acts that wowed small town audiences in the Midwest and represented what Greil Marcus calls “the old, weird America;” tent show melodramas;  close-knit  and eccentric theatrical companies that brought vaudeville and modern fashions and morals from the cities to rural areas.
And then, he’d gone to Hollywood as a leading man at Warner Brothers in the early ‘30s—an almost star who acted in movies opposite Humphrey Bogart, Spencer Tracy, Carole Lombard, Bette Davis, Barbara Stanwyck, Mae West----and a founder of the Screen Actors Guild.
In the late ‘40s and early ‘50s, he wended his way through a troubled, noir-ish period of his own life, acting in Ed Wood movies and what were then called exploitation movies (comically lurid stuff about reefer and teenage delinquency) and ended up making a comeback in classic family sitcoms of the ‘50s, notably “Ozzie and Harriet.”
He was a Zelig-like figure who was present at all these turning points in entertainment history, moments when local, sort of funky, do-it-yourself amusements were replaced by more sophisticated ones —first movies, then TV—for mass audiences whose tastes and desires they trained.
I knew I didn’t want to write a straight biography—his  story wouldn’t hold up to that—or a memoir, though there are certainly elements of both in the book.
But I thought that he would be a great main character in a bigger social history of entertainment and its influence in the 20th century.
As far as balancing the roles of historian/biographer and daughter: it wasn’t as hard as I thought it might be, partly because by the time I started writing the book, my father had died.
Knowing he wouldn’t be reading it gave me a certain freedom to be clear-eyed in my assessments of him—thinking of the reader rather than of his feelings--which is something, I’m gratified to say, that a lot of reviewers have commended, even in the context of what is a very affectionate book. 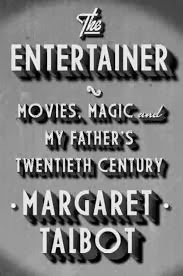 Q: What surprised you the most in the course of your research?
A: In terms of my father’s life, probably getting the final count on his marriages. My three older siblings and I knew that my father had been married before he married our Mom, but we really never knew how many times. The total turned out to be five!
But my research also corroborated  the family legend and our own  of our parents’ marriage as a great love story, and the feeling that in some ways, my father’s varied love life with a lot of lovely and some pretty wild women in Hollywood was, as my parents conveyed, sort of a prelude to the real thing.
Q: How did you select the title The Entertainer for the book?
A: My father had a real sense of himself as a working actor, a guy whose job—and it was a job he loved and felt very lucky to have but it was a job—was to entertain people.
He wasn’t a method actor, he didn’t have attitude, and while that might have helped explain why he became neither star nor a brilliant artist, it was also an orientation I came to admire over the course of writing the book.
He was a trouper, and he was grateful all his life, that he could make a living and support a family working in a creative field that he loved.
Every time he left the house—even just to go to the grocery store--he was impeccably groomed and sharply attired—that was his idea of upholding the social contract.  With him vanity was a kind of mitzvah.
Q: As a child, how many of your father’s movies and TV shows did you see, and have your feelings about some of those changed over the years?
A: I watched his movie with Shirley Temple, “Our Little Girl,” many times, though it always bugged me that since he plays the interloper—the suave neighbor who is moving in on Shirley’s Mom, while her Dad (Joel McCrea) spends too much time at his lab—Shirley rejects him in the movie.
It was weird seeing Shirley Temple telling my Dad he didn’t know how to be a daddy—even though I understood they were acting and even though this was a much younger version of the beloved father I knew. I guess it was just that as a little kid, I really liked and related to Shirley Temple.
And I watched him on “Ozzie and Harriet” and “Leave it to Beaver, “ on which my brother, Stephen Talbot, who acted as a kid, and is now a documentary filmmaker, was a regular.
But we didn’t have a sort of “Sunset Boulevard” household—thank God!—where my Dad was always screening old movies of himself in a darkened room.
My parents showed us what they thought might interest us of the filmed work, and we also went to the theater to see my Dad perform, which was always exciting—both my Dad and Mom, who had also been an actress, loved live theater, and sort of considered it the pinnacle of acting.
What I didn’t get to see were what are now my favorite movies of his—racy, cynical, taut little movies like “Three on a Match,” “Big City Blues, “Ladies They Talk About,”  “College Coach,” “Heat Lightning.”
These were movies made during the early ‘30s pre-Code period—the brief interlude when the Hays Code, the moral guidelines that were supposed to dictate what could be shown in American movies—was being more laxly enforced.
The upshot was movies that were franker about a lot of things, including drug use and female sexuality, than movies would be for many years to come.
As a result, most of these movies were still not shown on TV when I was growing up in the ‘60s and ‘70s, and they were not otherwise available. (Some movies of the era have been expurgated or permanently lost.)
There’s been a big rediscovery of pre Code movies  in recent years, through  Turner Classic Movies and its Forbidden Hollywood DVD collections, through revival houses and film societies, and through books by film historians like Mick LaSalle, Mark Vieira, and Thomas Doherty—and that’s been terrific for many reasons (among them that  it has finally allowed me to see some of the movies my Dad made when he was at the height of his appeal!).
Q: What are you working on now?
A: I’m a staff writer at The New Yorker where each year I usually write several long pieces that take a few months to report, as well as shorter Commentary-type pieces for the magazine and its web site.
Since writing the book, I’ve been doing more reporting about film—I did a profile of the director Alexander Payne that ran in the fall when “Nebraska” came out, for instance, and I’m  working now on a piece that has to do with special effects artists who create photoreal digital humans.
I’d love to write another book—this, my first, was so fun and satisfying to do—and I’m toying with a few ideas. But finding and committing to a non-fiction book idea really is like falling in love-- finding the right one that you can live with so intimately for so long!
Q: Anything else we should know?
A: Just—thank you for the opportunity to talk with you and your readers, and thank you for your blog!
--Interview with Deborah Kalb