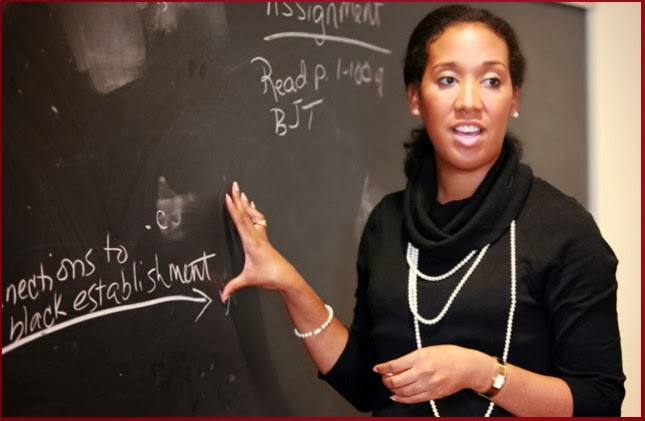 Andra Gillespie is an associate professor of political science at Emory University in Atlanta. She is the author of The New Black Politician: Cory Booker, Newark, and Post-Racial America, and the editor of Whose Black Politics?: Cases in Post-Racial Black Leadership. Her work has been featured in a variety of publications, including Politico, TheRoot.com, and The Washington Post.

Q: How did you come to write The New Black Politician, and why did you choose to focus on Cory Booker and Newark?

A: It all happened quite organically. I met Cory Booker in 2001 while I was still in graduate school at Yale. He gave a talk where he mentioned that he canvassed his entire ward to win election to Newark’s Municipal Council.

I was writing my dissertation proposal on canvassing at that time, so after his talk, I struck up a conversation with Cory about canvassing. He told me he was planning on running for mayor the next year, and I instantly asked if I could come to Newark to study voter turnout.

He agreed, and I started coming to Newark during the 2002 campaign for research. I intended to study the impact of canvassing on voter turnout, but while I was in Newark, I couldn’t help but notice the racial dynamic in the contest between Sharpe James and Cory Booker.

After Booker lost that first election, I wrote a conference paper on the race, which I hoped to publish after finishing my dissertation.

By early 2006, I was a new professor at Emory. I went back to Newark to observe the 2006 race in the hopes of writing a second article about the 2006 election. By the end of that election cycle, I realized that I had enough field notes to write a book. 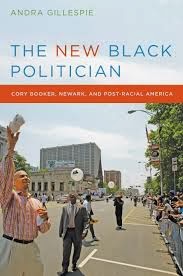 Q: Now that Booker is a new member of the U.S. Senate, what impact do you think he'll have there and do you see him on a national ticket in the future?

A: It’s way too early to predict whether Booker will be the second black president (though I’m sure he’s on such short lists already). Booker is still learning his new job, but once he gets his bearings (and assuming he doesn’t quickly seek another office), he has the potential to make a tremendous, long-term contribution to the Senate.

I remember telling his late father years ago that Booker had the potential to be the next Ted Kennedy, and I still believe that.

Q: You write, "I contend that the same forces that discouraged black leaders from addressing controversial problems in black communities also created opportunities for deracialized political candidates to gain political currency." How did that dynamic come about, and what do you see happening in the years ahead?

A: A number of structural factors contributed to the failure of early black mayors in reducing black-white inequality.

When black mayors were elected in northeastern cities like Newark, they faced declining populations (especially the exit of a home-owning middle class) and the resultant declining tax base, deindustrialization, and reduced federal aid to cities, among other things.

This made it incredibly difficult for these mayors to marshal the resources to address poverty. As a result, they tended to focus on affirmative action and downtown redevelopment.

The failure to truly transform cities opened up early black mayors to criticism, upon which younger black politicians have tried to capitalize to launch their own careers. 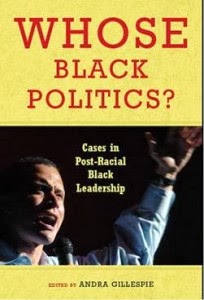 Q: How did you pick the topics and authors to include in Whose Black Politics?

A: Two things contributed to the publication of the edited volume. I made a presentation of preliminary findings for The New Black Politician to colleagues in my department at Emory. Many of them told me to expand the study to include additional cases. That suggestion was untenable for the type of project that The New Black Politician became, but it stuck with me.

I made the same presentation at a meeting of the National Conference of Black Political Scientists, and a friend asked me when I would be publishing the book. At that conference’s awards banquet, I sat with two friends who eventually became contributors (Tyson King-Meadows and Sekou Franklin). By the end of that dinner, we had decided to do the edited volume.

In terms of the volume’s content and organization, I wanted to be sure that Whose Black Politics covered the breadth and diversity of black politicians in the post-civil rights cohort.

This book would have been incomplete had I focused solely on politicians who were like Barack Obama (e.g. Cory Booker).  I hope readers walk away from the book with the recognition that the current crop of new black politicians includes deracialized politicians and those who don’t mind explicitly advocating for racialized interests.

Moreover, the cohort includes politicians who appear unassailable and those who have run into serious ethical problems. I wanted to address comfortable and uncomfortable issues regarding race, as well as talk about the triumphs and challenges of younger black politicians.

Once I had identified the cases and issues I wanted to cover, I then picked contributors based on a variety of criteria. Some people had already published articles on their topics, so we revised those articles for this volume.

In other instances, I reached out to my professional networks to recruit authors to write some of the other chapters. I gave preference to those who I knew had specific interests in or connections to certain politicians.

In two instances, I worked with a couple of my undergraduate students to revise papers they had written for my class on black political leadership for the volume.

A: I still haven’t learned my lesson about working on multiple projects at the same time!

Currently, I have three projects. I’m due to complete a book project on racial representation in the Obama Administration this summer. Hopefully, it will come out in 2015.

I am also working with a colleague on an African American politics textbook, which will hopefully be published in 2016.

Finally, I am working with a number of colleagues on a project about the origins of black Republican identification.

In addition to that, I maintain my research interests in Newark. I'll be back in Newark this spring collecting data on the 2014 municipal election.