Charles Graeber is the author of The Good Nurse: A True Story of Medicine, Madness, and Murder. It focuses on the life of nurse and serial killer Charles Cullen. Graeber's work has appeared in a variety of publications, including The New York Times, Wired, and Bloomberg Businessweek. He lives in Nantucket and Brooklyn.

Q: Why did you decide to write about Charles Cullen?

A: It started as a personal curiosity, like most stories, an exploration into a story which seemed interesting if half told.

Serial killer attempts to donate kidney from jail. He wasn't speaking to anyone, denied all press requests, wouldn't address the families. And at the same time was attempting to donate one of his organs, to a man who would die without a transplant. It was a fascinating and paradoxical situation which confounded any simple narrative of good and bad.

Eventually, Charlie Cullen started corresponding with me, then meeting with me. And as we met, and as I met others who suddenly felt they could open up some about the truth behind the Cullen story, I realized that the story was far more complicated than anyone had imagined. And it would take a book, and many hard years to get at it. At that point, it was a mission.

Q: How did you research this book, and what surprised you the most in the course of your research?

A: Research takes all forms. There's courthouse document stuff, there's background reading, there's deep background, for context, there are contacts, sources who are afraid to speak, sources who intentionally make themselves difficult to find.

Then there are the main characters. I wanted to be able to understand them as well as another could. So I spent as much time as possible with them.

Research isn't all about question and answer, it's observation. It's a soaking up, an inhabiting. I don't want to over-fancify the process, it's obvious, but a place, a person, a situation - they have, put plainly, a vibe. A truth. It's like a smell, in that it's a complicated sense memory. 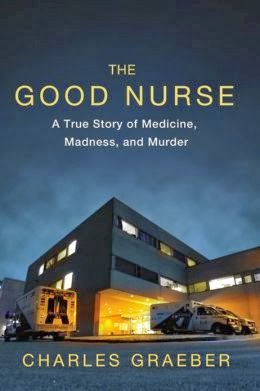 First you have to recognize it - what is the essence of a hospital night shift? A burn unit? A parking garage, a home invasion, a cop car, a homicide desk, an unhappy home, a happy one? I tried to know those places and the people who lived in the worlds.

And, as I said, I did that by, whenever possible, following them around - working, or observing, burn unit night shift work, the night train home, the empty highway, the overnights with the detectives. Trying to see through their eyes.

Also of course, I asked a lot of questions, and got a lot of good exclusive primary source material.

Q: Why did you title the book "The Good Nurse"?

A: It's not to be sarcastic. It's something about the cartoon way we look at people in uniform, failing to recognize the real humans within them. It's about the myth of good guys and bad guys, of black and white, of societal roles. So there's that.

But there are also good nurses in this book. Lots of them, but specifically, The Good Nurse is Charlie Cullen. He was an excellent nurse, one of the best according to his colleagues - when he wasn't being a very, very bad one.

It's an important aspect of his self identity. That's how Cullen sees himself. He's not wrong, if you don't take an average of his actions.

That may seem offensively naive, but that sort of selective judgment is also central to this story. The way he saw himself exemplified by some actions, ignoring others. The way Cullen was moved on with positive or neutral references. So, there's Charlie.

And then there's Amy, Cullen's best friend. Another nurse, not a perfect human, no angel, very human. A human with ethical choices to make. So, it's all of those things. Plus, it's short!

I leave that to the reader to decide. I'm interested in other people's sense of normal. You can go to the other side of the world, find a place where the assumptions about daily life are as foreign to your sensibilities as the clothing - or you can walk in the shoes of your neighbor.

The hospital system is a world, strange to those outside it. To enter as a patient is to be an astronaut. I wanted to give a sense of the other side. So there's that.

But what it says about hospitals, I suppose, is that they are a business. They need to be - that or a charity, or a public service...really, they are expected to be many things at once.

For the folks that dedicate their lives to working there, it's more than a factory, or a job, or an office. For docs and nurses, many of them, it's a calling.

But at the same time, there's a practicality which comes into play, a bottom line - it is, after all, a job. Workers are hired and fired, replaced. They fill the same uniforms. Anonymous in their blue smocks.

The system treats them as a commodity to a certain extent. But they're people. The business is life and death. Cancer pays. People get rich on cancer. Is that bizarre? I think so. Meanwhile, other hospitals are closing.

This is a jumble of thoughts at once, all relevant but not organized to a single answer. The book is about people and the choices they make. The choices might be ones made selfishly, to enhance career or ego, to blow off steam, to get what you want. It may come at a price for other people. We're talking about health care policy, we're talking about murder.

I think hospitals today, if personified, would be schizophrenics. Art and science, accounting and birth and death, the utterly tragic and the mundane, all with convenient parking. How could it be otherwise?

I’m in a listening mode. Working hard, daily, but not sure what shape the next thing takes. I know this is a bizarre answer, but I've not started the next book, and meanwhile I've been surrounding myself, feeding myself I guess. Getting fat too. Working on a burrito I guess you'd say. Also a book called Frequency.

A: Not at this time I think, but check in soon.