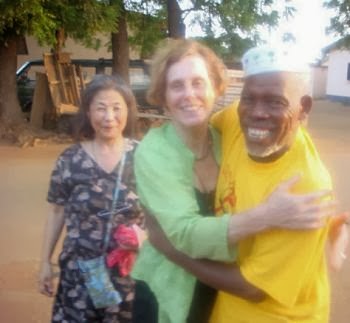 Louise Meyer is the co-author, with Gilbert "Bobbo" Ahiagble, of Master Weaver from Ghana, winner of the 1999 Children's Africana Book Award from the African Studies Association. A longtime educator, she lives in Washington, D.C.

Q: How did you end up working on Master Weaver from Ghana?

A: I met Bobbo, the master weaver, at the Museum of African Art, a very long time ago when it was still a private museum. They invited Bobbo to be an artist in residence at the museum. I was working at the museum; I had a background in textile arts, weaving, building looms. I became his assistant. I did a bit of everything.

When he left, I moved to the Ivory Coast with my husband and one child. I wanted to replicate all the things I learned from Bobbo. He had ambitions to open a weaving school in Ghana. The trip to the U.S. was transformative for him. In Ghana, he was just another weaver; he inherited it from his family. In Africa, they are responsible for the materials, weaving, and selling. It’s difficult. He was good at all that, and that’s probably how he ended up coming to the States, networking with the Peace Corps volunteers.

Q: What year did he come here?

A: It was 1975. In West Africa, there were opportunities to learn weaving. My family and I were in the Ivory Coast, the neighboring country to Ghana. I had ambitions to work with weavers. It was challenging; I had two small children, and it was hard to move around. Traditional weavers don’t end up weaving in big cities.

In Abidjan, I ended up working at an art school. I worked there in the weaving studio; it had fallen into disrepair, and I fixed it. That led to a job with the International Labor Organization. I was doing technology stuff, creating alternative machines for spinning cotton.

Then I was hired by the International Labor Organization to go up-country, close to Burkina Faso, to strengthen the artisan sector. Studies indicated that all the traditional weavers would disappear without support. That was a very exciting job, exactly what I wanted to do. It was similar to what Bobbo was trying to do.

I was close to Bobbo; I organized exhibits for him in Ivory Coast. They are neighboring countries; you’d think they know each other, but they don’t. One was colonized by the Brits, one by the French.

I already had a good relationship with the artists in the North. They would say, This guy is doing things we should do, too. What happened was giving them the incentive to copy what he did, and do it too. 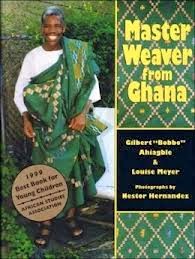 I moved back to Europe; I was married to a Swiss man. I invited Bobbo to come, with small funding from cultural exchange programs. He did demonstrations in schools and museums. When I moved back to the States, I had him come here; he came again and again.

So the book documents the relationship, how weaving is integrated with family life. It’s a non-formal education, pride in your product, all these things we are losing.

Also, there’s so much negative press about Africa [but] there are so many good things to show us.

The book became reality—there were challenges. This was before the Kindle. I was unknown. But it did happen. Brenda [Randolph, director of the Africa Access project,] submitted it to the African studies competition and it got an award; that helped keep it afloat, and helped get it into school libraries. It is on Kindle [now]. I do have dreams of incorporating video footage into a digital book; Kindle doesn’t allow that.

Q: How did it work to collaborate with a co-author and a photographer?

A: I needed his [Bobbo’s] approval of everything I wrote. It’s factual. One of the goals was to get rid of the junk, the bad books about Africa. This included sending text back and forth, faxing. There was more impact if it was co-published with him. I have a dream of publishing it in Ghana, but it hasn’t happened.

Q: What about the photographer, Nestor Hernandez?

A: He was so important. He passed away; he was a well-known photographer. One of the children’s book consultants I talked to said why don’t you go and take pictures? I said I’m not a professional photographer. I said [to Nestor Hernandez], you can go and stay with Bobbo for a month and take pictures. We can collaborate on this book. That’s what he did. I told him before you take any pictures, I want you to learn how to weave.

A: He did. It’s hard as a grown person to learn. It’s a very physical activity.

Q: How did you become involved in weaving?

A: I’m of that generation when during the war in Vietnam, everybody was going crazy with what the world was coming to. I was in a Ph.D. program, and I got fed up. I went to Europe; I wanted to do something with my hands. A lot of people now are the same; we’re going in cycles. I did an apprenticeship.

A: I co-founded a group that promotes renewable energy; we promote solar cooking all over the world.

What got me into that was working with the artisans. In Ivory Coast, I was supposed to focus on women. Men do the weaving; women spin cotton. I learned that these women, if they don’t spin cotton, have no income at all. If they spin cotton, at least they earn a little. The weavers need the cotton.

The women I was working with, ages 15-45, they were so busy collecting firewood to cook food, heat the water, they don’t have enough time for anything. The old ladies would sit under a tree for an hour or two and spin cotton. But the women taking care of the households had no time for anything.

With solar cooking, using the sun to cook food, they [would have more time; they] wouldn’t have to get firewood. My goal is to return to Ivory Coast with technology and change the world! The countries we work in [in Africa] are all English-speaking countries; it’s hard in French-speaking countries.

A: I have an exhibit traveling from school to school. With the solar cooking project, a publication mentioned me, and it got into the hands of a refugee from Congo in a refugee camp in Zimbabwe. He started sending drawings, essays, poetry. I was overwhelmed with happiness and grief at the same time. Finally, with the help of an art teacher, I put together an exhibit. It’s traveling from school to school in the D.C. area.