Kwame Mbalia and Prince Joel Makonnen are the authors of the new middle grade novel Last Gate of the Emperor. Mbalia's other books include Tristan Strong Punches a Hole in the Sky. He lives in North Carolina. Makonnen is the great-grandson of the last emperor of Ethiopia, Haile Selassie I. He is an attorney and co-founded the media company Old World/New World. He lives in Los Angeles.

Q: How did the idea for Last Gate of the Emperor come about, and what was the collaboration process like?

KM: The idea for Last Gate actually came from a mutual friend, and after meeting Joel and talking it just made sense for us to collaborate. We both share a passion and love for telling stories about Africa and the African diaspora, and imparting its history through both a contemporary, fantastical, and sci-fi lens.

Q: What impact did Ethiopian history have on the book?

JM: Although the story in Last Gate of the Emperor is set in Ethiopia in a distant future, it is heavily inspired by Ethiopian history. And more specifically, the royal dynasty that ruled for centuries -- i.e., my family.

There are many references to famed emperors, kings and queens, going all the way back to the kingdom of Axum (present-day Ethiopia). So, I know that our readers, while being massively entertained by the adventures of our protagonist Yared and his bionic lioness Besa, will also learn a lot about this part of the world.

KM: The book could really only have one ending, but without giving too many spoilers, the path to that ending took many turns. Self-discovery, growth, making friends and finding family—Yared's journey from Addis Prime to Axum was a fun process of discovery. 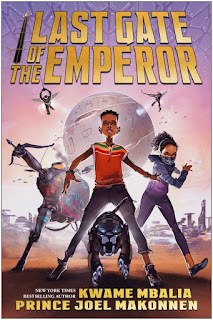 JM: First, I want kids to just have fun reading this sci-fi/fantasy adventure -- and a big plus if they can imagine themselves playing Yared's favorite augmented reality game "The Hunt for Kaleb's Obelisk!"

Second, after they finish Last Gate, I'd love for them to explore even more about Ethiopia and her rich history.

Lastly, but more importantly, I'd love for kids to be inspired by Yared's journey of self-discovery so that they too will embrace their true core and make themselves the heroes of their own story. Your story is like a superpower! Use it to do good in the world.

KM: Africa, and more specifically Ethiopia and its rich history, was the inspiration for many parts of Yared's story, and I hope this story prompts readers to do their own searching and study for the stories of the African diaspora that have been ignored for too long.

JM: Bionic lionesses are the coolest thing in the world! Go quickly join Yared on this adventure and see for yourself how many cool things Besa can do.

Also, to have a young African boy hero for our young readers to behold and love is simply amazing. More times than not, Africa isn't represented accurately. Worse even is how little depiction of a futuristic Africa there is in the media and books.

That sends such a wrong message, especially to young children, and I want to start remediating that. Is it so hard to imagine an advanced, futuristic Africa? Will Africa not exist in the future?

Of course it will. And our book is an affirmative statement to that effect and an opportunity to help reshape the narrative for the African continent for future generations.