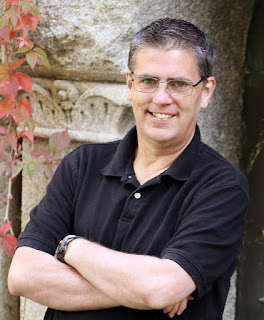 J. Scott Savage is the author of the middle grade novel The Lost Wonderland Diaries. His many other books include the Case File 13 series. He lives in Utah.

Q: What inspired you to write The Lost Wonderland Diaries, and how did you create your characters Celia and Tyrus?

A: I’ve loved Wonderland since I was a kid. It’s just such a fun combination of logic and imagination. I’ve thought about writing a middle grade story that took place there for years but didn’t feel like I was ready as a writer to capture the right voice and tone.

Recently, I was reading about [Alice in Wonderland author] Lewis Carroll, aka Charles Dodgson, and discovered he was a math professor and inventor who loved puzzles and games. He kept diaries his whole life, but after he died four of them disappeared. No one know who took them or what was in them. I thought for sure someone would have written a novel about it, but no one had, so...

Celia and Tyrus were the natural protagonists because they also represent logic and imagination. One of the things that made Carroll’s books especially unique at the time was that he had a young girl as the narrator. Up until that time, a girl could be in a book, but would never have told the story herself.

I also wanted to have an underrepresented narrator, so I chose a dyslexic girl. Both of the characters were telling my stories in a way, because I am neurodivergent and was picked on as a kid, making me turn to books.

Q: The Publishers Weekly review of the book says that "this adventure captures the Wonderland spirit while updating it for a new era." What did you see as the right balance between the original Alice in Wonderland and your own version?

A: Especially when you are talking about Wonderland, you have a lot of people who know a little bit about the world. So, I wanted to start with elements they were familiar with—Cheshire, Hatter, the Queen of Hearts. But then I wanted to explore who they were in more depth and what drove them to do what they did.

But I also had readers who had never read the books or seen the movies, as well as people who knew the books inside and out. Ultimately, I tried to write a story that would be satisfying to Alice fans, expand the world in new ways, and still be fun and understandable to all readers. 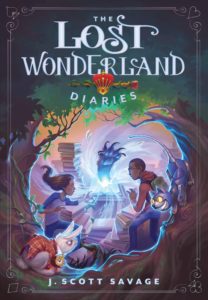 Q: Why do you think Lewis Carroll's books and the idea of Wonderland are still so compelling today?

A: First of all, the writing is just so fun and quotable. Other than the Bible and Shakespeare, I think that Carroll’s books are quoted more than any other piece of literature.

And the themes are universal. People around the world struggle with questions of identity, coming of age, and balancing science and logic with creativity, hope, and imagination. Everybody wants a Hatter making them laugh and giving them advice.

A: My wife called this series my love letter to Lewis Carroll and I think that’s pretty accurate.

A lot of times people write stories based on the classics or fairy tales because there is something they want to change. Or they write books that take place in Oz or Wonderland type locations and feature the characters, but the stories themselves don’t feel anything like the books they are based off.

Ideally, I’d love readers of all ages to finish The Lost Wonderland Diaries and immediately want to pick up the original or see the movies. The best thing a book can do is inspire kids to go read another book.

A: I just turned in book 2, The War of the Queens. It continues the story of Celia and Tyrus as they go into The Looking Glass World to retrieve their mirror images that have been stolen to fight for the Red Queen.

Next week, I’ll give my agent a new middle grade novel called Crispin Mortus, Necromancer at Large about a 12-year-old boy who can communicate with the dead and bring his friends’ pets back to life.

War of the Queens is scheduled to come out fall of 2022, and my agent will shop Crispin Mortus.

A: Those were great questions! It’s so fun to talk about inspiration and process. I love getting a peek behind the scenes at stories I’ve enjoyed.

I do get asked a lot about why I chose to switch POV from first to third in the story. I like to think of a story not as just words on a page, but a movie playing in my readers’ heads.

When we are in our world, I felt like it was super important to see things through the filter of a dyslexic girl who has lower self-esteem and just wants to fit in. I think that fits a lot of kids at that age—not just the neurodivergent ones.

But once we enter Wonderland, the camera pans out because Wonderland is just so crazy and fun and wild that it’s hard to see from tight first person. Plus, I think it sort of makes the reader feel like they just fell down the rabbit hole as well.

And along the same line of books as movies, I LOVE when movies have post-credit scenes. So, my publisher let me do one at the very back of the book, after all the discussion questions, author notes, and acknowledgments.