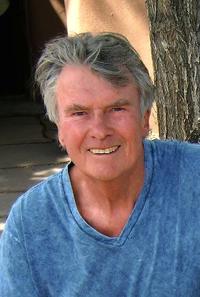 James Oliver Goldsborough is the the author of the new novel Blood and Oranges: The Story of Los Angeles. His other books include The Paris Herald. A longtime journalist, he lives in San Diego.

Q: How did you come up with the idea for Blood and Oranges, and for the Mull family?

A: I’m old enough to know Los Angeles back to the end of World War II. That takes us to the era of oil wells on the beaches, trolleys running everywhere, a single freeway to Pasadena, comfy houses for $15,000 and UCLA open to any kid with a “B” average from public high school (which was me).

To explain how we got from there to the megapolis of today, America’s second city, with this magnificent transformation witnessed through the eyes of members of a single family, is what I set out to do. 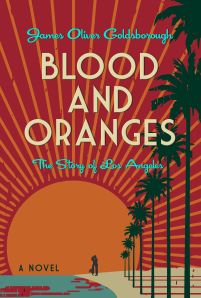 A: Everything in this story is researched. Historical fiction follows the outlines of history even as it uses imagination to elaborate that history.

For example, the story touches on many different businesses and activities – oil, movies, land development, aircraft, transportation, religion. I researched them all.

I thought I knew the story of the “great transportation conspiracy,” but delving into it surprised me at how much I didn’t know and what a terrible blow to the city it was. And is.

A: Titles are not easy. They tend to come toward the end of the writing when you have perspective on what you’ve done. The story evolves, and so does the idea of trying to capture the gist in a title.

I went through dozens of possible titles before settling on “Blood and Oranges,” which in two words gives a sense of two dominant aspects of the city: violence and mayhem on one hand; the unique and irresistible beauty of the great valley between the mountains and the sea on the other.

Q: What do you think the novel says about family dynamics over several generations?

A: As for the family, the Mulls, I chose a Scotch-Irish name because Blood and Oranges is in part a story about religions, and the Scotch-Irish contrast represents two of them.

The brothers, Willie and Eddie Mull, are twins born with identical genetic coding but defying genetic pre-destination, one brother ordained, the other a non-believer, both sinners. They love each other, but cannot understand each other.

As for Eddie’s daughters, Maggie and Lizzie, vastly different in character and interests, they represent women coming of age post-World War II, both choosing professions previously closed to women and making their mark in them.

A: My current project is to tell the story of the annus horribilis that was 2020, when the country was infected by two devastating plagues, one named Covid and one named Trump.

My focus is mostly on the second one, which drove friends and families apart as no political catastrophe has done in this nation since the Civil War.