Pam Jenoff is the author of the new historical novel The Woman with the Blue Star, which takes place in Poland during World War II. Her other novels include The Lost Girls of Paris. She also teaches at Rutgers Law School, and she lives in the Philadelphia area.

Q: What inspired you to write The Woman with the Blue Star, and how did you create your characters Sadie and Ella?

A: I was inspired by a true story that I discovered while researching ideas for a new book of Jewish people who had survived the Holocaust by hiding and living in the sewer. I had never heard of such a thing and was stunned.

I created Sadie by reading the stories of several young women who had lived in the sewer and combining and fictionalizing them.

In real life, one of the young women in the sewer had looked up and seen a girl her own age buying flowers on the street. She was struck by the disparity and her mother promised her that someday, there would be flowers for her too.

I created Ella from the image of the girl buying flowers and imagined a friendship between the two. 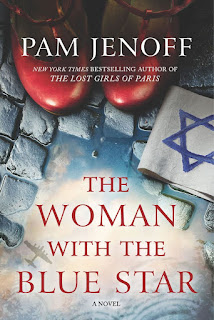 Q: You say in your acknowledgments, "Like the year 2020, this book seemed, in many ways, doomed from the start." Why was that the case, and how did you turn the book around?

A: I believe in being very honest about my writing journey, including the failures. I turned in a draft manuscript for The Woman with the Blue Star and my editor told me honestly that it was not right at all.

We had hard conversations about what needed to be done and it involved rewriting 90 percent of the book. This was the first time in 11 books that such a thing had happened to me and I was devastated and overwhelmed by the task. I wallowed in self-pity for about 10 minutes and then realized that this was the work and got started.

It was incredibly difficult but the result was a book that is better in every way and I am so glad I accepted the rewriting challenge. I learned so much!

A: This book involved extensive research about the sewer: what it looked like, how it functioned, how people could survive there. Not always a pleasant topic, but fascinating to be sure!

I was surprised by the whole subterranean world, from great rushing rivers of water that might drown a person to tiny pipes almost too small for anyone to fit through.

I also enjoyed learning about the different groups of people from varying backgrounds (economic class, religious observance) who were thrown together in the sewer and how they learned to co-exist.

A: I’m a pantser (that is, I write by the seat of my pants rather than outlining.). I always have an opening image and some idea where I will wind up and one or two “high moments’ -- scenes along the way which I can see vividly that act as lighthouses to guide me.

But often the ending will change and surprise me before I get there, and in this case all I can say is it did for sure!

A: I can’t say. I’m usually happy to talk about my work-in-progress, but right now is just too soon. Please ask me again in a few months.