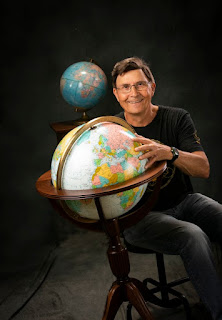 Tom Mattson is the author of the new book The Other Worlds: Offbeat Adventures of a Curious Traveler. He is based in Minnesota and Guatemala.

A: Readers of stories I sent home a dozen or more years ago asked for more. So I pictured how my experiences and the people I meet on six continents would look in literary full dress, not just in brief flashes. I began to let the creative corners of my mind take control.

Quite beyond my volition, outlines of new stories have begun to float above my head as I walk foreign streets.

And, whether in Old Havana or in my tin-roofed shack in a Mayan town next to Guatemala’s Lake Atitlan, I might have to jump out of bed in the middle of the night to jot down a phrase or idea that seeps into my sleepy brain.

As the stories about strangers who became friends multiplied, I knew I must share them with readers wherever they live in the world.

I created these writings between 15 years ago and months before publication. I started seriously re-writing important ones three years ago, realizing that many needed more details, backgrounding, and the best words our language has to offer.

Q: How did you first become interested in traveling, and how do you pick the places you travel to?

A: I grew up in Biwabik, a small Minnesota iron mining town. In those days, few people traveled. My family, though, packed up our old car and headed north to visit cousins in Canada.

A few years later, a Los Angeles uncle wrote, “Let’s meet in Montana in July,” or “Let’s go to the Seattle World’s Fair,” or Montreal’s or New York City’s. We never said no. He paid for gas since we didn’t have the money.

With this childhood apprenticeship in adventure behind me, I experienced the Summer of Love briefly in San Francisco, hopped a freight train for a couple days and nights, hitchhiked to Texas, and worked in New York City the summer of Woodstock. 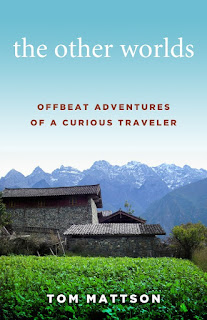 And at 25, I did the footwork for the book’s “Around the World in 400 Days.” And now I’m traveling four or five months a year (conditions permitting).

To pick places to travel, I’m eager to scoop up information coming in from 360 degrees around me, 365 days a year. It might be a traveler I meet (“favorite places in Mexico”), a friend (“Bhutan”), the internet (“A through Z”), travel guides lined up on bookstore shelves, and The New York Times’ historical and cultural stories.

A: A title, for me, was elusive. But when my editor, Caroline Lambert, was scrutinizing every aspect of my manuscript and proposing uplifting revisions, she suggested the title, The Other Worlds, and offered ideas that, with input from my publisher, became the subtitle, Offbeat Adventures of a Curious Traveler.

What was the editor’s reason for The Other Worlds? A Minnesota friend had emailed me when I was traveling in Cuba for the fourth time (which became a dozen before the book’s publication). He queried: “Tom, why do you love the other worlds so?”

The editor loved my manuscript’s descriptive answer to this question so much that she thought that story (Why Do You Love the Other Worlds So?) would be a great opening chapter in the book.

I resisted, since I had my heart set on first telling the story of Maribel, who I met on a Havana park bench—and who remembers seeing Hemingway, Batista, Castro and Guevara on the surrounding streets. Caroline’s suggestion, though, became the title!

Q: How did the people you met on your travels react when you got back in touch with them?

A: I’ve re-visited many of the strangers I met by chance, sometimes many times. That was the case with Hisako Matsuda of Japan, and we really enjoyed visiting again just a few years ago, when she was 98 years old. As a 25-year-old, I’d lived with her and Mr. Matsuda for five months in their old samurai house in Kanazawa.

And I’ve journeyed back to see friends in China, Cuba, Guatemala, Bolivia, Peru and Ecuador. It really is a thrill for all of us. Everyone loves to talk to their friends!

Those who are characters in my book won’t be surprised, because I asked for their reaction and approval before publication. They wholeheartedly agreed.

Chema, a Mayan fisherman in Guatemala, also asked me to include his full name in the book, which I’d never known. So, that’s how “Jose Maria Mardoqueo Cotuc Hernandez” appears in the book.  I was pleased to oblige.

Chema and the others who were about to make bold appearances in the book seemed to be telling me, “Make my story travel!”

A: I have writings about adventures that haven’t yet been published—traveling in Africa in 1986, road-tripping the Kingdom of Bhutan with a Bhutanese guide, and returning to visit a Cuban mountain friend who, as a boy, eyewitnessed and now reveals the revolutionary struggles of Fidel Castro and Che Guevara in a hot war against the Batista armed forces.

And a writing I’m not about to revise takes place in the Galapagos Islands, where I swear I’m living out my life with other creatures in the ocean—and thus developing into “a slightly different species.”

A great love—one I just discovered seven years ago—is motorcycling the American West. These yearly accounts are centered around people I meet in small towns and in Native America, and reveal my affinity for old hotels, diners, bullet-riddled saloons, petroglyphs and incredible museums.

A: I’ve shown up at bookstores, museums, ethnic gatherings, and a high school College Writing class. I welcome invitations to give my take on traveling the world and writing about it.

I may have an inviting life for years to come, my publisher Gail Woodard of Dudley Court Press tells me. My appetite is always whetted to embrace an adventure!