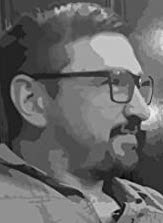 Jesse Edward Johnson is the author of the new novella The King of Nothing Much. He also has written the novel Yearbook. Also an artist, he lives in the Pacific Northwest.

Q: How did you come up with the idea for The King of Nothing Much, and for your character Weldon?

A: The idea for this book came to me almost 10 years ago, in the middle of the night. It was one of those moments when you have no choice but to get out of bed and start making notes. By the time I’d finished, I had four handwritten pages of a proto-novel or story (or novella, as it turned out).

Those pages got lost in a big stack of papers for a few years. When I came across them again, I found that I was still interested in the character and the story, and decided to start writing it and see where it took me.

The first draft ballooned to 60,000 words, at which point I knew I didn’t have a full-length novel on my hands. So I tried to turn it into a short story. But it didn’t want to be that short. So here we are: a novella, one of the world’s loveliest forms.

Though I got the idea for the book years ago, the main character, Weldon Tines, has always been 41 years old. And now that the book is coming out, I too am 41 years old. So I suppose I just had to wait for my circumstances to catch up to his.

Q: The Kirkus Review of the book called it “a funny, tender, but indulgent study in modern masculinity.” What do you think of that assessment? 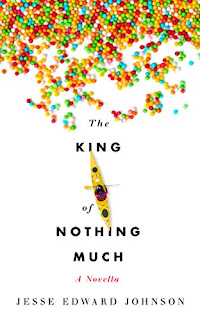 A: Those first two words—“funny” and “tender”—are highly gratifying. I think they encapsulate exactly what the book is trying to do (that is, it’s trying to take readers on an emotional journey, with plenty of laughs along the way).

But I must confess I’m a little perplexed by that last word! I suppose the act of fiction writing is always “indulgent,” to the extent that you are making the extravagant assumption that anyone is going to want to read what you have written.

But I’ll have to leave it up to readers of the book to decide just how indulgent they find it to be.

A: As I suggested above, the skeleton of the story came to me almost in its entirety.

That said, my writing process never moves in a straight line. We made a lot of changes along the way, and the closing pages of the book didn’t take their final form until the very last stages of editing.

Q: How was the novella’s title chosen, and what does it signify for you?

A: When I wrote that phrase—“the king of nothing much”—it immediately became the working title of the book, and it never got dethroned (forgive the bad pun!). 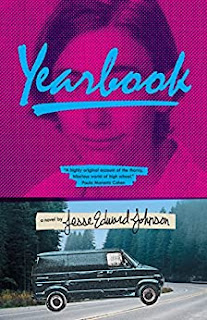 To me, it speaks to the complicated view of masculinity addressed in the book. Weldon is a kind of “king,” but his realm is rather small and undefined. But in the “nothing” that is the scope of his authority, there lies a something quite profound.

A: Lots of different things! When I’m not writing fiction, I work as a textual artist. I’m currently figuring out my next series of visual poems.

As for fiction, I’ve got a number of different ideas brewing: a historical novel set on Vashon Island (where I live); a middle-grade fantasy novel based loosely on Dante’s Inferno; another young adult novel; and (yes) a potential sequel to The King of Nothing Much.

Which one will bubble to the top first? Who knows! Maybe something else entirely….

A: It feels strange to have a book come out during these difficult times. But there is also something reassuring, I think, in the persistence of culture in the face of mass adversity. I try to take solace in the small comfort my work may be able to provide others as the world struggles to get back on its feet.