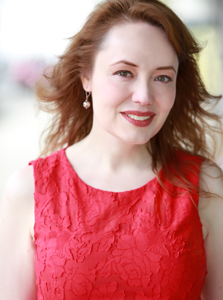 Hilary Davidson is the author of the new thriller Don't Look Down, a sequel to One Small Sacrifice. Her many other books include The Damage Done, and her work has appeared in a variety of publications, including Ellery Queen Mystery Magazine and Thuglit. She lives in New York City.

Q: How did you come up with the idea for Don't Look Down?

A: I grew up watching a lot of old movies, and I was thinking about what was considered blackmail material back then versus what’s possible now.

We love to think that we’re more open today — and in some ways, we are — but social-media influencers construct identities that are just as artificial as those picture-perfect 1950s families were.

I started thinking about what kinds of secrets a person would pay dearly to keep, and realized that it’s not necessarily so different for a woman today, especially an ambitious one.

Jo Greaver, the suspect at the center of Don’t Look Down, was trafficked as a teenager, and while that makes her the victim, society can be very harsh towards victims of sex crimes. 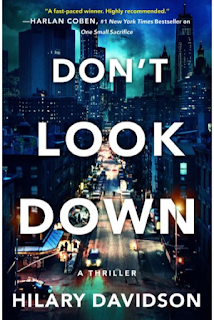 Q: This is your second book featuring Detectives Sheryn Sterling and Rafael Mendoza. Do you think they've changed at all from one book to the next, and what was it like to revisit them after the first book?

A: I don’t think Sheryn has changed a lot, but Rafael definitely has.

In One Small Sacrifice, they had only recently been paired by the NYPD as partners. Rafael was badly injured in the first book, and in Don’t Look Down he’s back on the job but still dealing with his injuries — he’s walking with a cane, and he has headaches and tinnitus.

He’s still sarcastic, but there’s more of his soul showing through. He’s a tough guy, and it’s hard for him to be the partner who’s moving slowly and playing catch-up.

He and Sheryn are much closer now, but their dynamic is also more complicated — she’s annoyed when he can’t keep up and feels guilty about how he was injured, while he’s determined to prove that he shouldn’t be on desk duty and angry when she tries to sideline him. 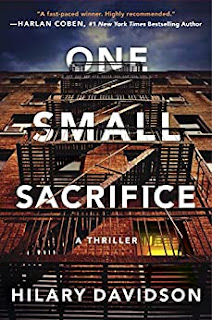 Q: Did you need to do any research to write this novel, and did you learn anything surprising?

A: This is tricky to answer without giving away any spoilers! I can say that I did a lot of research into how our justice system treats teenagers and young women who’ve been trafficked, and I was astonished by how harsh it tends to be.

A teen girl is far more likely to be locked up for a misdemeanor than a teen boy is. I’m still in shock that girls get longer sentences for misdemeanors than boys get for felonies.

Society still has different sets of rules for boys and girls, and there’s an expectation that girls must behave well, whereas boys can get away with an awful lot.

Q: In our previous interview, you said, "The most interesting thing for me is the interaction between the characters and their environment." How did that dynamic play out in this novel?

A: One of my favorite things about writing books with multiple points of view is showing the reader the same setting through a different lens.

The apartment where Jo Greaver meets with her blackmailer in Chapter One — where they shoot each other — is the same apartment that Sheryn Sterling walks into later. The only difference is that there’s a man’s dead body on the floor in Chapter Six. 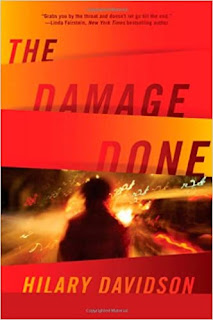 But Jo and Sheryn notice different details, and what they see and think about tells you something of who those characters are. If I’m being completely honest, there are usually subtle clues in what characters see or don’t see, but I don’t think that would be obvious to anyone else on a first reading of the book.

A: My next novel is a standalone about a young woman who’s the black sheep of her family. She’s in shock about her older sister’s death, and comes to believe that is was a murder, but as she digs into her sister’s life, she realizes her picture-perfect front was all a lie.

I don’t have a title for it yet — those usually come to me after I’ve written a book, and I’m in the home stretch writing this one now. It will be out from Thomas & Mercer in the summer of 2021.

A: I know I told you about my love of writing short stories last time we talked, so it won’t surprise you to know I have a few new ones out.

I have a story in a new collection called The Swamp Killers, which came out in March, and another in a Warren Zevon-themed collection that will be out late this year.

But the biggest news is that I have the rights back to my first four books, and my Anthony Award–winning debut, The Damage Done, will finally be back in print by summer.