Sarah Aroeste is the author of the new children's board book Buen Shabat, Shabbat Shalom. She is a musician who focuses on Ladino and Sephardic music, and she lives in Massachusetts.

Q: How did you come up with the idea for Buen Shabat, Shabbat Shalom?

A: It actually was originally a song that I wrote! Besides writing children’s books, I’m a musician specializing in Ladino (Judeo-Spanish) and Sephardic music. I’ve been writing Ladino-themed songs for children for years.

My fifth album, Together/Endjuntos, is a bilingual (Ladino/English) holiday album, and I wrote the song,“Buen Shabat” as part of that recording.

Simultaneously, as a parent of young kids, I’m a subscriber to the PJ Library program that offers families free books with Jewish content every month.

As much as I admire the program (it really is such a gift!), I wished for more books that showcased diverse families and content. I wanted something for my daughters that could reflect their own special Sephardic heritage.

I began speaking with PJ Library and we realized together that one of my songs could effectively be turned into a book! I chose the “Buen Shabat” song because I felt that the theme of the Sabbath was relatable across many levels. 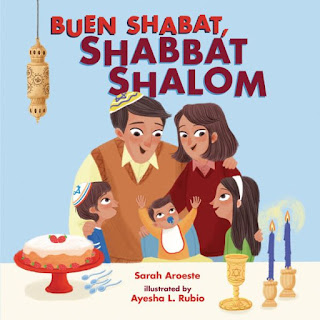 I wanted to use ideas that many families were familiar with already, but add the layer of introductory Ladino words to give some extra fun and engagement. My hope was to show some things that are similar and some things that are different. With a few tweaks of my song, the board book was born…

Q: What do you think are some of the most common perceptions and misperceptions about the Sephardic Jewish community?

A: I’m not sure there are misperceptions as much as there is just a simple lack of knowledge. We live in such an Ashkenazi-dominant world where Eastern European Jewish culture has become the norm—even outside the Jewish community.

Certain cultural symbols such as Yiddish, matzoh ball soup, or hava nagila have been appropriated in mainstream culture. These are what people now see as “Jewish,” when in fact, there is so much more to Jewish cultural expression.

Anything non-Ashkenazi is too often considered “other” or “exotic,” which is a shame because we have so much to offer! We have Ladino, we have delicacies like biscochos and buyikos, Cuando el rey Nimrod (our equivalent of hava nagila) and so much more.

I like to say that Sephardic culture is Jewish culture—we’re one and the same. And for me, the beautiful legacy of the Ladino language is something that I wish more people knew about.

Before World War II, Ladino was the most dominant Jewish language spoken throughout the Mediterranean and the Balkans. I’m constantly dismayed that most people today have never even heard of it! And with the loss of a language comes the loss of a culture. I (and many of my colleagues) are trying to change that.

For me, it’s through music and books that offer an entry point for families in fun and accessible ways.

Q: What do you think Ayesha L. Rubio's illustrations add to the book?

A: Ayesha did a beautiful job incorporating my suggestions for how to make the pages reflect a Sephardic family, which included incorporating symbols such as the hamsas on the wall, henna-patterns on the curtains, Turkish lamp and tea sets, fish at the dinner table, and more.

I was happy that Ayesha listened to my input about the imagery, and I appreciated that she brought it to life.

Q: What do you hope kids (and their parents) take away from the book?

A: I hope they come away seeing that Jewish life doesn’t all look and sound the same as what they might be used to. I want families to have fun with the Ladino words and that those words get stuck in kids’ brains as they get older.

If families are exposed to Sephardic culture when kids are young, then children will grow up wanting to learn more. That’s the goal!

A: I have several manuscripts in the pipeline right now, all of which hint upon a fun aspect of Jewish life through a Sephardic lens. I’m really excited to share more Sephardic stories for slightly older kids through picture books and middle grade fiction. Stay tuned!

A: Ladino rocks! That’s my mantra. I’ve been so pleasantly surprised by the overwhelmingly positive reaction to this little book both from kids and their parents.

When I signed the publishing deal, I was just so thrilled that more families would have the chance to learn about Ladino; it’s an added bonus that so many have really connected to the book. It’s a note to publishers out there that diverse and own voices content really has a wider audience out there.