Phoebe Maltz Bovy is the author of the new book The Perils of "Privilege": Why Injustice Can't Be Solved By Accusing Others of Advantage. Her work has appeared in a variety of publications, including The New Republic and The Atlantic. She is based in New York and Toronto.

Q: How did you come up with the idea of writing about privilege, and how do you see the concept of privilege changing in recent years?

A: Around the time of the 2008 recession, I started seeing a lot of privilege call-outs (as in, “check your privilege”) appearing online, on blogs and, especially, in blog comment sections, which were in many ways the precursor to social media as it exists today.

I began writing about the phenomenon of privilege accusation on my blog  (under the tag YPIS, for “your privilege is showing”), but in the course of researching the book, realized extends to other arenas as well: college admissions, cultural criticism, and politics.

What interested me wasn’t online trolling as a broader phenomenon, but rather the specific subset that presents itself not as trolling, but as self-righteous defense of (often absent) marginalized parties.

A culture had developed online where no matter the context, every topic, every cultural object, every political debate had to be discussed in terms of privilege. What struck me was both how ubiquitous the phrase (and framing) had become, and how empty.

With “privilege” functioning as, in effect, a synonym for “bad”, “wrong”, or “oblivious,” its function as a catch-all insult seemed to eclipse its use as a description of society’s structure. 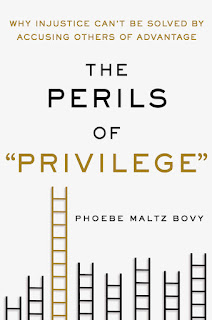 While the hierarchies the (progressive) privilege framework refers to is real, and is really a problem (that is, racism, sexism, etc., exist), it’s not clear that the great privilege-awareness project (with its focus on privileged individuals’ self-presentation) does terribly much to address it. If anything, it makes things worse.

As for how the concept has changed in recent years, what happened is, a concept that has generally been used to refer to wealth and family connections, to a life of luxury and ease, has come to be used to describe every possible form of unearned (and, often, earned) advantage.

Q: In a recent Washington Post review of your book, Carlos Lozada wrote, "Someone needs to book Phoebe Maltz Bovy on one of those television shows featuring people who have the most awful jobs in America, because she has just completed a project so soul-crushing that I can’t imagine anyone ever doing it again, certainly not voluntarily." Was it soul-crushing?

A: It wasn’t soul-crushing! As I understood that part of his review in context, Carlos Lozada was saying that online arguments (and comments sections), which are many (not all) of my sources, are – especially, perhaps, for writers – painful to read. The dregs of discourse.

While I sort of get that when it comes to internet comments on my own writing, I don’t think it’s viable, at this point, to pretend such sources aren’t a big part of what the cultural conversation these days consists of.

Law professor Ann Althouse explained this in a blog post about the review better than I could, but basically, the idea is, online squabbles are sources worth looking at.

Also, as a practical matter, for nearly all the time I was working on what wound up being the background research for the book, and then on the book itself, I was also working.

The embarrassing fact is, I’m someone who has chosen to use some spare time reading blog comments sections and Twitter arguments, because I find many of them genuinely interesting.

Q: Where does feminism fit into the concept of "privilege"?

A: So very many places, particularly since the election, and the great feminist post-election reckoning.

One way to look at it is, feminism exists as pushback against male privilege. (Or, as I’d prefer to put it, against sexism.) What happens, though is that internal feminist debates quite naturally tend to involve highlighting the relative privilege of some women over others.

Within feminism, this is necessary – feminism can’t just be about CEO numbers. But movements have porous borders, and online, it’s often not clear who’s who. Criticisms of so-called elite feminism are sometimes about a needed reprioritization within feminism, but one finds the same sort of rhetoric from anti-feminists.

Put another way: It’s one thing to think women minimum-wage workers should have more of a voice relative to (say) Sheryl Sandberg than they do. It’s another to say that Western feminists have nothing legitimate to complain about, and that it’s fancy and oblivious to care about having women in leadership positions.

The fact that women – even privileged ones! – face sexism gets lost. Women – as a group, and certain individual public figures – remain the face of “privilege,” even while maleness remains one of the major forms of unearned advantage.

All of these issues – which I discuss at length in the book – have become if anything more of an issue since the election. Paradoxically, ever since Hillary Clinton lost, she’s become that much more the symbol of privileged feminism.

Q: Given the arrival of the Trump administration, where do you see the privilege debates heading?

A: I think – and I get into this in the Afterword, which I wrote just after Trump became the GOP nominee – Trump has managed to make the “privilege” approach work in his favor.

A: Fiction and non-fiction, both about academia, both still very much at the Microsoft Word document stage…

A: Here’s where I’ll reiterate that systemic injustice – racism, sexism, wealth inequality, and more – is real. These are phenomena that need to be addressed more, not less. My issue with “privilege” isn’t that it’s given too much of a voice to historical underdogs. It’s that it’s done the opposite.