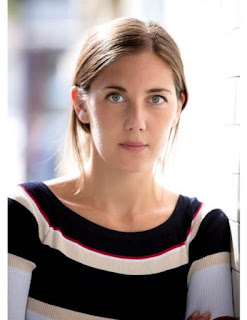 Olivia Sudjic is the author of the new novel Sympathy. She was bor in London in 1988.

Q: How did you come up with the idea for Sympathy, and for your narrator, Alice Hare?

A: The idea originated due to an interest in a 17th century physician and polymath called Robert Fludd, who believed in a kind of bizarre medicine called Powder of Sympathy.

Originally I was going to write a historical novel about this medicine itself and what happened in the imagined scenario, it was brought to Japan through Dutch traders during its period of seclusion. In those days it was believed Sympathy Powder could connect people and things across vast distances, which also had technological applications such as the ability to solve the problem of Longitude.

However, that was pretty tough going and then I found the David Mitchell book The Thousand Autumns of Jacob de Zoet, so I stopped and the modern world crept in. Sympathy became a novel about, amongst other things, virtual reality, the cannibalism and plagiarism of digital personas, and connections made online.

My narrator, Alice Hare, came into the story as a way to explore the effect of this on someone’s identity. She begins the story unmoored from any traditional markers of identity, such as family or institutions, having been adopted (as a mixed race child) into a dysfunctional white family, moved from place to place, ending up far removed from her birthplace (New York) and her real parents.

She goes back to New York to construct her own version of an Origin Story, but gets seduced into someone else’s. 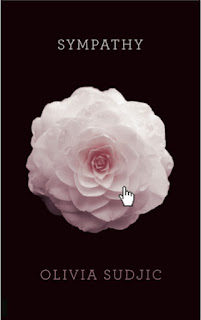 A: There are multiple meanings contained in the word, although it has come to be associated with a certain morbid rack of cards in gift shops, sentimentality, and the ability to put ourselves in the place of characters in books.

First and foremost I see the title as being about connection between things, whether human or not. From there, it is of course about our compassion for others, but I am also interested in the potentially darker edge to this; how it ties us to people, our moral responsibility to them, our tendency to project our own feelings onto others and imagine we are sympathizing.

I read Susan Sontag on the subject of what photography does to our sympathy, as this felt extra relevant to Instagram. I also read David Hume, who defines it a number of ways. One is “the conversion of an idea into an impression by the force of the imagination,” another is fellow feeling for human beings, as the foundation of moral obligation.

I was also thinking in terms of symmetry and the idea that the same fundamental building blocks are within everything and everyone, which is similar to principles that underpin particle physics (a preoccupation of Alice’s in the book) and the medicine, powder of sympathy (or forms of sympathetic magic by which one thing can operate on another from far away).

It was also intended to nod to the idea that readers seem to find it hard to “sympathise” with unlikable characters if they are female. In the context of Alice being mixed race (so is Mizuko, being half Japanese, half English), I see Alice’s dim but growing awareness of her heritage and ethnicity when she arrives in America (I imagined her birth father as being dark skinned, her birth mother white) as a way of thinking about how blackness as anything other than cultural appropriation, seems only to be coming into a collective white consciousness now, thanks to movements such as Black Lives Matter, and the denial by white people over systemic racism, the fallacy of “colour-blindness”.

Despite such protest movements, what’s white is still always at the centre, and as a white novelist I am unable to access what lies beyond it.

While my understanding stops at its edge, I’m not sure that, as we push for progress, diversity and representation, we should also assert that white novelists must only imagine worlds populated by fictional white people exactly like them.

This is at least how I feel at the moment, that the challenge for all novelists is to show humanity beyond stereotypes. So I was struggling with what to do and I think that’s in the title as well.

Ultimately it’s a book precisely about the difficulty of truly comprehending any individual experience other than your own, and the illusion of sympathy now we imagine ourselves to live in a connected world.

Q: What do you think the book says about relationships and connections in the social media era?

A: I’m not all doom and gloom on this. I’m not suggesting that the instincts that bring about some of the disastrous attempts at intimacy in the book are brought about by social media. More like exacerbated or catalyzed.

Social media is designed to prey on certain human frailties. My aim was to show that there are fundamental things about us as human creatures, drives and needs and desires, that have always been around, but which the tools we have created in order to satisfy them have begun to shape. We are shaped by our tools is what I’m saying.

The more Alice feeds into social media, the more the technology (its secret algorithms, geolocational functions and the metadata it harvests) uses that to predict and define her. This ends up making her feel trapped rather than powerful.

I refer obliquely to a book called The Age of Earthquakes: A Guide to the Extreme Present by Douglas Coupland, Shumon Bassar and Hans Ulrich Obrist. That talks about the idea that the internet can find you your perfect, identical double.

They’re more fearful of it than I am, but one thing I do feel anxious about is the inhuman speed at which social media can move, it moves faster than humans have time to be fully conscious of what they’re doing with it and its implications. Its interface might be legible, but the programming and design behind it is another language to anyone who can’t code.

The first American novel is The Power of Sympathy. A chief theme is how dangerous novels are in letting people sympathise with potentially immoral characters. The first edition title page makes interesting reading – “Intended to represent the specious causes, and to expose the fatal consequences, of seduction; to inspire the female mind with a principle of self complacency, and to promote the economy of human life.” It’s also about incest.

A: Yes, and I wish I’d allowed myself greater freedom to move around as that would have allowed some happy accidents when I’d got into my stride, but at the beginning it felt crazy to embark on such a long journey without a very precise map.

I mapped out the plot to within an inch of its life. I mean that literally, I had big maps on the wall. Family trees. Diagrams. Pinboards. This meant that when it came to actually writing it, which I did the bulk of over three months, I stuck very closely to my agenda, ticking off what had to happen in each section.

This time around, with my second novel, I’m approaching it slightly differently, with more flexibility which I guess comes with increased confidence.

Another pitfall of having a plot all planned out in advance is that you get bored of it, and keep inventing flourishes to keep yourself entertained as you go, forgetting that a reader won’t have spent months ruminating over this, and will find it hard to keep up with all the twists and turns you’ve added in to keep yourself guessing.

A: I have barely any time right now to write properly as I’m doing a fair bit in order to help with the launch for Sympathy, but I do have a plotted story, with a title, and a slightly wild accumulation of notes that is about 200 pages. It involves Montenegro, a married couple, fake news and a survivalist cult at the moment. We’ll see.

A: I love my job and feel supremely lucky to be doing it.