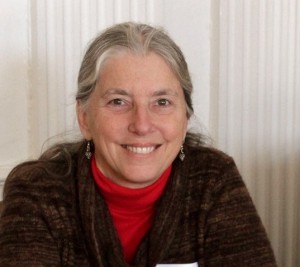 Anita Sanchez is the author of the new children's book Karl, Get Out of the Garden: Carolus Linnaeus and the Naming of Everything. Her other books include In Praise of Poison Ivy and Leaflets Three, Let It Be!. An environmental educator, she lives in upstate New York.

Q: Why did you decide to focus on Carolus Linnaeus in your new book?

A: For a science class I was teaching, I was trying to figure how to make the complex (and frankly pretty boring) topic of scientific classification of organisms seem interesting.

I started reading about Linnaeus and how he decided to take on the immense task of organizing, classifying, and naming every living thing in the world. I soon discovered he had a remarkable personality, and I loved his boundless enthusiasm for nature.

Even as an old man he would leap out of bed in the morning to go see a new bird or flower--he'd run outdoors in his dressing gown, telling his students, "Nature does not wait for powder and wigs!" 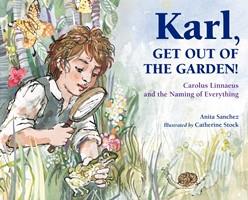 A: Like Karl, I've always believed that knowledge begins with "knowing the things themselves," and so I went to Sweden to visit Karl's garden. I went hiking in Lapland, north of the Arctic Circle, where Karl studied wildflowers and subalpine forests, and I marveled at the Northern Lights.

Then I visited his garden in the university town of Uppsala, where he became a beloved teacher, and saw the plants he used as his "living textbooks" to teach students about botany. Karl used to lead fun, hands-on field trips into the woods and meadows, and I followed the paths where he led his excited students.

The most surprising thing for me was finding out how young Linnaeus was--he was only about 22, fresh out of school--when he decided to classify and name all of the world's plants and animals, a pretty ambitious goal! 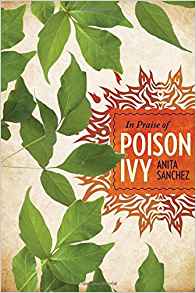 A: "Karl, Get Out Of the Garden!" was what his mother would say to him when he was a little boy, sneaking off from schoolwork to revel in the beauties of nature in his father's garden. It made the distant figure of Carolus Linnaeus seem real and human to think of him as a little kid getting into trouble.

The subtitle, Carolus Linnaeus and the Naming of Everything, reflects my amazement at his impossible goal. As he finally discovered, naming everything in the world is a job that will never be finished!

Q: As an environmental educator, what do you see looking ahead in that field?

A: Over many years of teaching about nature, I've seen kids (and adults) become more and more fearful of nature, and disconnected from it. That's why I wrote a book called Leaflets Three, Let it Be!. It's about poison ivy, so that kids will understand what it is and know how to avoid it.

I think the main challenge facing those of us who love the outdoors is simply to get people of all ages outside, and then let nature do the teaching.

Fear is a big reason people don't want to go into the wilds--fear of bugs, poison ivy, getting lost, whatever. A lot of my writing is to try to address people's fears and give them the knowledge to feel confident outdoors. 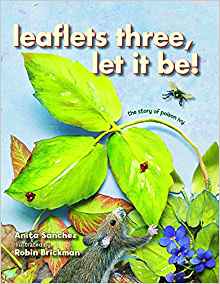 A: I'm working on a book called Itch, which is about all the things in nature that make you itch. It will be released in spring 2018 by Houghton Mifflin.

Like Karl, I'm fascinated by all forms of nature, even the creepy, icky ones no one loves, and the book is about mosquitoes, poison ivy, tarantulas, and even (I'm sorry) lice.

I got interested in this weird topic when I discovered my grandfather's diary from when he was a soldier in World War I and spent a lot of time doing battle with "cooties."

A: I'm also working on an activity book (co-authored with George Steele) called Wait Till It Gets Dark!. It's a kid's guide to exploring the night, and has activities to help people feel comfortable and safe outdoors at night.

It's about using all your sense to explore--listening to frog calls and owl hoots, watching fireflies and stars, and even practicing using your nose to sniff the night scents!

My hope is that the more kids learn about nature, the more they'll want to go outdoors and see for themselves how much fun it is to have adventures. My goal is No Child Left Inside!