Debbie Bornstein Holinstat is the author, with her father, Michael Bornstein, of a new book for readers age 10 and up, Survivors Club: The True Story of a Very Young Prisoner of Auschwitz. She is a producer for NBC and MSNBC News, and she lives in New Jersey.

Q: Why did you and your father decide to write this book about his experiences during the Holocaust?

A: I've wanted to write this book for as long as I can remember. My dad was the holdout. He just didn't want to think about his past and he certainly didn't want to talk about it with his kids. He preferred that we grow up seeing the world through rose-colored glasses.

But recently something shifted in him. My dad started to realize that older survivors aren't here anymore to tell the stories of the Holocaust. He started getting pressure from his grandkids who pushed to hear their Papa's story (He really can't say “no” to the grandkids. They've got him wrapped around their fingers).

And there was something else. We found a Holocaust deniers' website that was using a photo of him at liberation to imply that Jews lied when they said children were killed on arrival at Auschwitz. Another photo of him was captioned: Pretty healthy kids for a "death camp."

That was an important reminder that it was time for my dad to talk.

Q: Had he told you very much about his childhood before you started working on the book?

A: I've always known my dad was a survivor. He's my father. It's not like I could miss the blue tattoo on his arm. But did he talk to me about it? Not really. I knew he was in Auschwitz and that my grandmother would sneak bread to him to keep him alive.

When I was a teenager, my grandma Sophie (his mother) moved up to New Jersey. She was sick and elderly and at that stage, but she was very willing to share. I learned some stories then, even if my father didn't know we were talking about his past. I knew bits and pieces from other relatives too, but it was scattered information. I didn't have a cohesive picture of the past.

Q: What type of research did you need to do to write this?

A: Museums from Washington, D.C. to Jerusalem were incredibly helpful in providing documentation and photos. We found a collection of essays from survivors who knew my family that were printed in Hebrew. We had those translated and that provided incredible support.

I listened to countless hours of Shoah testimony from survivors who were in the Pionki Labor Camp at the same time as my father and his family and we accessed a diary shared by a relative who was in hiding after their hometown was liquidated.

Perhaps the most critical information, though, was shared with us by a family friend from Zarki, Poland named Marvin Zborowski. His brother Eli Zborowski (who founded Yad Vashem International) also wrote a book that supplied us with significant detail. 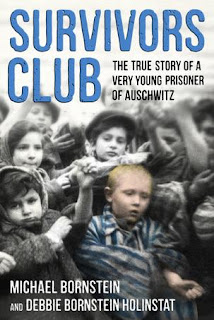 Q: What was it like for the two of you to collaborate on this book?

A: This has been the most incredible journey. There were some tough days. It's not easy to listen to your father talk about a childhood filled with starvation, degradation, malnutrition, sexual assault, bullying and loss. My heart broke a hundred times along the way.

But I'll never forget the day I first found research showing that Israel Bornstein was credited with saving many inside the Zarki ghetto. I got to tell my father that HIS father was a hero. That was an incredible day.

A: Shortly before the release of Survivors Club, I started working on a novel for middle grade readers that I hope will highlight the importance of using the internet responsibly. I hope it serves as a cautionary tale to students my own kids' ages.

I'll be honest though. Ever since the release of Survivors Club a few weeks ago, there hasn't been time for anything but book talks and TV, radio and print interviews. It's a wonderful problem to have! For now, new writing is on the back burner. I hope to return to that work soon.

I'm also hoping to get back to my freelance work at MSNBC news where I produce segments for live news shows a few days each week. It's a job I love!

A: When we first wrote Survivors Club, we didn't know if it would just be something we kept for the grandkids. We were on the verge of self-publishing when we decided to send out just a few emails to potential agents. Within a week we had an agent (the incomparable Irene Goodman), and a bidding war between three mega publishing houses. It was such a crazy ride.

Looking back, I think the whole project was just fated. My dad stayed silent for 70 years and I always wondered why. Then he finally agrees to co-write this book and it finds an incredible publisher (FSG/Macmillan) and is released at a time when the country faces rising anti-semitism and signs of new discrimination everywhere.

It no longer seems like an accident that any of it happened now, or happened this way. We are reaching so many readers - from middle grade on up to adults - and my dad has closure.