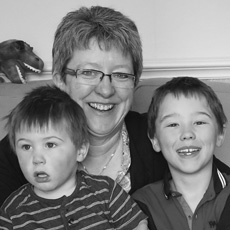 Helen Bate is the author and illustrator of the new children's graphic novel Peter in Peril: Courage and Hope in World War II. It tells the story of a Jewish boy in Hungary during the war. She has illustrated six children's books. She lives in Shropshire, England.

Q: How did you learn of Peter's story, and how did you decide on the graphic novel format in which you told it?

A: Peter is my brother-in-law. He’s been married to my sister for 40 years and they have always lived in Switzerland and Austria.

Ever since I found out what had happened to Peter I have felt it important to write it down in a way that children could understand, and the graphic novel format seemed the real way to do that.

I decided to include much more text than you’d find in traditional graphic novels, as I wanted parents or teachers to be able to read the story to a child - it’s a difficult subject and one that needs some adult involvement to answer any questions it raises. 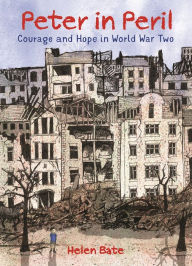 A: I had my brother-in-law’s story written down in detail by my sister - so that saved me a lot of research. I did, however, have to go back to Peter for certain details or more information to fill in the gaps.

I also needed to simplify parts of the story - as there was actually more complexity in reality, than appears in the story. I did this in full consultation with Peter as I didn’t want him to be unhappy with the finished version.

When I was watching some film footage of the events of the Holocaust, I was very surprised by how the people who were liberated from the concentration camps at the end of the war, so quickly tried to get back to normal life - even while still living in the camps.

Clothes were brought in, and the women immediately started to take care in their appearance. The urge to get back to a normal, civilised life was strong - despite the terrible horrors they had experienced and witnessed. They weren’t completely broken.

Q: What do Peter and his family think of the book?

A: Peter and his family are very happy with the book. They’re also happy that Peter’s cousin Eva, who also appears in the book, had the chance to see it in print before she died.

Peter's eldest grandchild who lives in Scotland, is a bit young for the book still, but she was recently read the story and was fascinated that this little boy was her Grandad. As Peter’s grandchildren grow up, it will be a lasting reminder for them of their own family history.

The book's also been well received by Peter’s brother and his family who still live in Budapest. Their history has never been talked about much and the younger family members are really very interested in it.

Q: What do you hope young readers take away from Peter's story?

A: I hope young readers take away the message that although awful things can happen, life does go on and people can recover.

I wanted young readers to know that children like them can survive these things, and go on to have a good life - especially readers that have been through the modern day atrocities happening in the world right now.

I also wanted them to see that although there are evil people in the world, there are also good people… and they can choose which they want to be.

A: I am working on a second graphic novel style story about dementia. This is an area I’ve worked in for 10 years after my own mother had dementia. (I set up the social enterprise www.picturestoshare.co.uk to publish books for people with dementia.)

Although there are quite a few simple picture books for younger children on a theme of “My Grandma has dementia” there is nothing in a bit more depth for older children about 7 to 10.

I wanted to provide a book about dementia that is both funny and positive - and I was inspired by a wonderful book written by Martin Slevin about his mother and her dementia - The Little Girl in the Radiator. 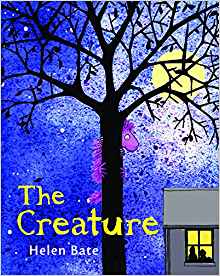 A: I have a children’s picture book coming out in October in the U.K. called The Creature. This book stems from my interest in the way animals are portrayed in children’s books and how any portrayal of the REAL nature of animals and “wildness” is almost non-existent.

Animals are relentlessly anthropomorphised in books and films for young children because it’s easy to make them funny, “cute,” and appealing.

But there are very few books or films that encourage our children to really feel the magic, mystery and ‘otherness’ of the wild creatures that live alongside us. I wanted to try and do this.