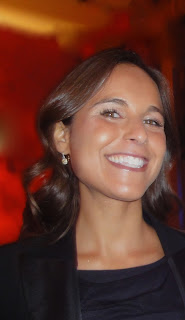 Jenna Hammond is the author of the new children's picture book Downward Mule. She is a freelance writer and certified children's yoga instructor, and she is based in the New York area.

Q: How did you come up with the idea for Downward Mule?

A: Since childhood, I have considered myself an author. It was only fitting that I write a children’s book upon becoming a parent. I tinkered with various ideas, from a board book about the seasons to a children’s cookbook.

But once I became immersed in writing a picture book that incorporated yoga and characters with lessons to impart, the protagonist Sam Mule assumed a life of his own.

Downward Mule is the first book to bridge yoga and an actual story. It thrilled me to bring something new to the marketplace, especially a transformative book that could benefit children’s minds and bodies. After all, a major impetus behind the project was the knowledge that yoga has the power to heal, among other wonders.

While a magazine editor in New York City, I became a certified children’s yoga instructor after seeing how yoga helped a child with special needs gain the ability to walk.

I wrote an article about this child, who was largely unresponsive to physical therapy and medical interventions. Practicing yoga with a personal instructor, however, enabled the girl to become mobile and eventually walk – a feat some doctors deemed impossible.

I stopped working full time as an editor and part time as a children’s yoga instructor when I had my firstborn. Yet, the child’s journey and my desire to share yoga with all children, including my own, remains part of my psyche.

I harnessed the benefits of my personal practice, my children’s love of yoga, yoga’s growing prominence in schools and popular culture, and my knack for creativity and humor to pen Downward Mule.

The book brings my upbringing full circle, similar to how yoga means union and how the book’s quirky characters come together (in a circle actually!) through yoga in the end.

Q: Can you say more about what role has yoga played for you, and do you think your readers have to appreciate yoga to enjoy the book?

A: Yoga has played differed roles for me in different times of my life. I started the practice in graduate school as a new exercise to try.

I soon discovered how yoga strengthened my mind-body connection while enhancing everything from my flexibility to my sense of calm. A bonus was how it reduced my occasional back pain before and during pregnancy. 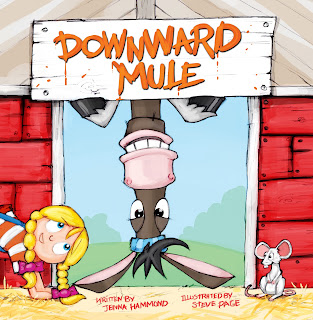 Upon becoming a parent of super active boys, I appreciated how yoga offered my family a chance to channel our energy in positive ways and nurture our creativity with inventive poses. My 5 year old is a champ at creating new poses!

In between, I became a certified instructor gracious for connecting with children through yoga. I learned more about staying in the moment and staying calm down to my core despite any chaos in the world. This has proved monumentally helpful, though sometimes difficult to practice, as a new parent and author in New York City.

Of course, readers need not appreciate yoga to enjoy Downward Mule. The book has a plot, conflict and characters like traditional picture books. From the messages about self-confidence and community to the illustrations that lend magic to the whimsy and enhance the story, there’s much to embrace in the book sans yoga.

Many children tell me they adore Downward Mule because of a favorite character or because of the plot resolution – how Sam overcomes his shyness and acts like a superhero, saving the farm.

Kids tend not to gush about the yoga, although parents tell me that their little ones now bend, twist and pose like Sam and the farm folk during playtime. When it comes to me, I often read the book at home and to audiences without doing a single yoga pose.

The Saturday prior to this interview, I read Downward Mule straight through without pausing for the poses at Barnes & Noble. Children ages 2-10 in attendance were riveted by the prose and pictures.

It seemed best not to interrupt the book’s flow – or the kids’ undivided attention – by posing with the characters. Afterward I led movement inspired by the book. But it was nothing like the yoga you see in a gym or a yoga studio.

A: Downward Mule caters to 3-7 year olds. However, people of all ages with an imagination, an appreciation for kid lit or an interest in movement delight in the book.

Q: What do you think Steve Page’s illustrations add to the book?

A: Steve Page’s illustrations help make Downward Mule the zany and inspirational book I imagined. He was receptive to each direction I requested in designing the characters and pages.

Steve also had the idea to incorporate a silent mouse in the illustrations. A fan of Margaret Wise Brown’s Goodnight Moon, and an aficionado of whimsy, I was delighted when I saw Steve’s version of such a mouse. Children agree the idea was “wise” (pun intended). They cherish finding the mouse in myriad poses throughout Downward Mule.

Steve also brought to fruition my vision for the complex cover. After nearly a dozen sketches, Steve nailed it!

Fait accompli is Sam doing the downward mule (or down dog) pose atop a barn with Lila in the pose down below peeking at Sam from the outside – not an easy feat for an illustrator!

Yet Steve accomplished this as well as depicting the animals and the farmer’s daughter in pose after pose with aplomb. His skill for drawing the anatomy of animals and other characters in all sorts of positions, without forsaking creativity or wit, is extraordinary.

The end result is an adorable book that dually instructs readers how to do an imaginative form of yoga in the most fun way possible.

A: My brain buzzes with a number of picture book ideas. Some of these ideas I have started writing. Some I’m developing with my older son verbally as he fancies storytelling as much as his mom relies on writing.

However, as a stay-at-home mom in addition to being an author, I only have time for so much creative writing especially as I continue to freelance edit on occasion.

Then again, MacLaren-Cochrane Publishing and I are exploring creating a coloring book starring Sam Mule. The story would be different than Downward Mule, yet just as playful and inspirational albeit in a fresh way fueled in part by children’s creativity.

Steve Page has expressed interest in the project too. For now, find printable coloring pages on the Teachers & Parents tab of jennahammondauthor.com.

Also find me reading Downward Mule and leading interactive entertainment like children’s yoga at bookstores, children’s places and schools. As a new author, I’m enjoying spending time with audiences both in-person and through Skype.

I have at least five book-related events this month alone, including sharing Downward Mule and movement with more than 100 3rd through 5th graders at UBS in New York City for Take Our Kids to Work Day.

I am hoping to bring the book and my brand of children’s yoga to the small screen in the future, perhaps with a stint on PBS or a show like Sesame Street once time permits or the right person and I connect. Stay tuned!

A: I’m an open book with a lot to say and share with the world. But read Downward Mule for a glimpse at what yoga, humor and whimsy offers everyone.

I’ll tell my story or a fictionalized version of it if I ever get around to writing a novel or a self-inspired children’s book. For now I just hope that whether or not you’re mooooved by yoga, be open to falling head over hooves for Sam, Lila and the rest of the barnyard in Downward Mule.