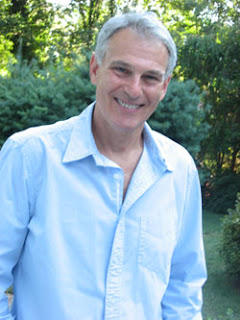 Lawrence Goldstone is the author of Higher, Steeper, Faster: The Daredevils Who Conquered the Skies, a new book for children about early aviation pioneers. His other books, for adults, include Drive! and Birdmen. His work has appeared in a variety of publications, including The Wall Street Journal and The Boston Globe.

Q: Why did you decide to write this book for kids about early aviation pioneers?

A: My main goal in writing Higher, Steeper, Faster was to demonstrate to kids (and their parents) that there were stories of real people every bit as gripping and fun as the fantasy and contrived fiction that dominates the young reader market.

That kids can also learn while being entertained is obviously an added benefit.

If there was more of this sort of non-fiction in the young reader mainstream, I'm convinced, middle school students will be that much more engaged when they get to high school and college.

I chose the early aviators because they epitomize the commitment, personal magnetism, and heroism that I thought would be most appealing to kids and, again, parents.

Q: You’ve written on a similar topic for adults—what are some of the differences between the two books, and what was it like writing your first book for younger readers?

A: In Birdmen, my book on early aviation for adults, there was a good deal of emphasis on the ferocious competition, both in the air and in the courtroom, between the Wright brothers and Glenn Curtiss.

There was also a good bit of technical information on the scientific and engineering problems that needed to be solve to enable powered, controlled flight. 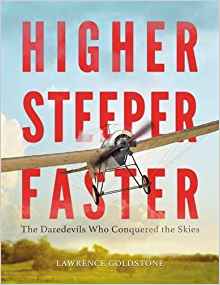 There aren't too many middle schoolers who want to read about patent law, or spend time plowing through technical specifications of airfoils, so these sections had to be severely restricted in a book for kids.

Also, the Wright brothers were extremely controversial--far more than they are generally portrayed--and I didn't feel it useful to spend a lot of time on personality issues.

In terms of the writing itself, I thoroughly enjoyed the challenge of making the language sufficient explicable for young readers without in any way dumbing it down.

I sent early drafts out to some middle school kids I know and was gratified...and not a little relieved...that they all like the style a great deal.

Q: One of the figures you highlight in the book is the aviator Lincoln Beachey. What are some of the most intriguing things about his career?

He was a man totally without fear, yet he had enormous respect for the dangers that he courted every time he took to the skies. He was a genius in an airplane, a total natural--a Bobby Fischer or Michael Jordan. He performed feats that not only no one of his era could begin to match, but it is doubtful that anyone since could as well. 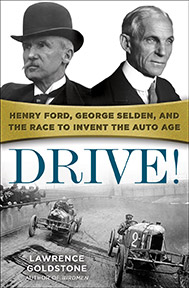 Beachey was also a total oddball--he didn't smoke, didn't drink, loved women...copiously...and opened bank accounts under phony names in almost every city in which he performed. He made more money in one day than most Americans made in a year, and was better known than the President.

There is no way in such limited space to begin to detail either his achievements or his oddities.

A: I have proposed a book on Constitutional Law for middle school, specifically about the civil rights decisions of the Supreme Court in the late 19th century that enabled the horrors of the Jim Crow era. The proposal is currently out with editors.

Now before everyone goes shaking their heads and saying, "What!!???  Constitutional Law for middle school!!??"  here's an excerpt from the proposal explaining what I want to do and why.

I believe that everything I said in the first answer about Higher, Steeper, Faster is true of this story as well--and am equally convinced that both kids and parents will find it compelling and riveting.

“We are living in a time in which the rules have changed. Donald Trump’s ascent to the presidency not only left most political professionals stunned and perplexed, but inspired fear and despair among the record number of voters that denied him a popular majority. 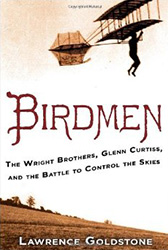 No election since that of Abraham Lincoln has exploited such a division in America. But Donald Trump is no Abraham Lincoln. Many believe that under his presidency the very democratic system under which our country has been governed for more than two centuries is at risk.

In the wake of Trump’s election, many of those who had previously thought it unthinkable—both liberals and conservatives—blamed the stunning ignorance of the American voter. How could so many fail to distinguish between legitimate debate about how our government should be administered and diatribe denouncing the institutions of government themselves?

The answer lies not in what those intoxicated by Trumpian rhetoric chose to watch and listen to as adults, but that they grew into adulthood with no grounding in how American democracy actually functions…and has functioned in the past. Conspiracy theories, after all, can only flourish in the face of ignorance.

There is nothing more vital, therefore, than to begin to correct these errors where they began—in school and in the home. Currently, however, children’s education as to the history or workings of American government is all too often either superficial or reverential.

Phenomena such as slavery or the savage conquest of Native American homelands are generally portrayed as anachronisms, anomalies, which in no way reflect the overall soundness or fundamental fairness of the American legal system. The Supreme Court in particular is rarely depicted as an instrument of inequality and repression.

History, however, tells a different, more layered tale. The Supreme Court is made up of men—and more recently women—whose views, politics, and prejudices more often than not seep into and even guide their decisions. As a result, the Supreme Court has been responsible for some of the most important confirmations of freedom and equality in our history, such as in Brown v. Board of Education.

But it has also experienced frequent dark periods, one of which came at the end of the nineteenth and beginning of the twentieth century when it literally rewrote two Constitutional amendments and thereby ushered in and enabled the Jim Crow era.

These were terrible times during which black Americans were denied the vote, forced into segregation, and were regularly beaten, raped, and even murdered with no recourse at all to a legal system that had been created to protect them. And, where every schoolchild knows Brown, how many know of these earlier decisions, which made Brown necessary?

Today’s middle-schoolers must be made aware of America’s full history, for this is a time when the rules for what our children read should change as well.”