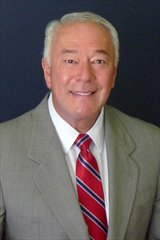 Robert K. Wittman is the co-author, with David Kinney, of the book The Devil's Diary: Alfred Rosenberg and the Stolen Secrets of the Third Reich, now available in paperback. He also has written the book Priceless. He founded the FBI's Art Crime Team, and is president of Robert Wittman, Inc.

Q: You were involved in the efforts to retrieve Nazi official Alfred Rosenberg's missing diary. How did you and David Kinney end up writing a book about Rosenberg and the diary?

A: After we did the recovery in 2013, the diary was so important, and had never been transcribed or translated—it was in the files in Nuremberg during the trial, but the prosecutors didn’t really use it in the trial.

The diary was to be sent back to the National Archives, but…Robert Kempner [a German-born lawyer who worked on the trial] acquired it—he kept that and 8.000 pounds worth of documents that he did not turn over. He had it shipped to his home in Pennsylvania…

[Once it was recovered,] we wanted to do something to educate the general public. There is a historians’ group that studies World War II, and who are very familiar with it, but that’s probably one percent of the population.

We wanted to take a very important diary and put it in context—how it was discovered, who took it, the contents of the diary itself—and write it in a way that they general public could understand.

If you’re a historian, you’re probably not going to get a new perspective, but if you’re a general Joe, like me, you will learn a lot…This is the guy who indoctrinated the Nazi party. That’s why it’s vitally important. Our goal is to educate, inform, and warn the general public… 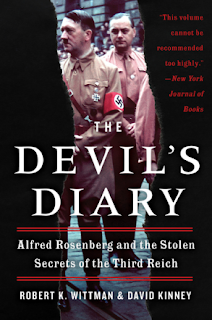 Q:  How did the two of you work together on the book, and what type of research did you need to do to write this?

A: The toughest parts were [getting] the detail on Robert Kempner…also, putting the diary into context. There were only three major diaries written by top Nazis.

The other two were written for publication. If that happens, you will have information colored in their own way to make them look good. Rosenberg didn’t do that. His diary was what he was thinking…He didn’t write every day, so he was only hitting the high points.

It’s hard to see what was happening in Germany on that day. That was a real task, and was challenging. David is a fabulous Pulitzer Prize-winning journalist. He would put information into a format, and I would go over that…we worked very closely together.

It took us three years. We’re good friends; it worked out well. We went to Germany together, and saw the areas where Rosenberg lived and we went to the concentration camp. We had to immerse ourselves into the period and the tragedy—it’s very difficult; it was a very dark time…

Q: Despite your own involvement in the case, was there anything that particularly surprised you as you worked on the book that you had not known before?

A: The simplicity of how those guys came to power. You’d think they had a grand plan, but they just utilized events to make it work for them. You think of the Germans, the Nazis, having a hierarchy of a system. There was [an organized] system from the bottom up, but at the top it was every man for himself. In the FBI, we call that a shit show.

Hitler’s management style was to give three people the same job and let them fight over it. There was a cacophony of fighting they would do. A lot of Rosenberg’s writings involved hatred of others at that level in the Third Reich. He wanted to be the head of foreign services, and when Ribbentrop got it, he thought he was an idiot.

Q: For those who perhaps don't know much about Rosenberg's role in the Third Reich, can you say more about his importance?

A: He was the chief ideologue, the philosopher who came up with the ideas. He believed Jews started the Bolshevik Revolution in Russia and there was a big fear of communism after the First World War. He saw Jews as the devils of Europe.

Rosenberg had certain feelings against organized churches. Not just Jews, but Christian churches—he writes that he went to a church and saw people kneeling before a dead person—that was Christ on the cross. The basic reason was that was in competition with their Nazi philosophy—they wanted to be the church of Germany…

Rosenberg became the chief spokesman of the Nazi party. He was sent by Hitler to educate the masses and foment the rabble. He gave long-winded speeches like Hitler did. In the 1930s, he was as popular in German culture as Hitler. His book The Myth of the 20th Century was right next to Mein Kampf.

Q: You said earlier that your goal was to educate, inform, and warn the general public. Can you say more about what you meant when you said “warn”?

A: If you read The Devil’s Diary and you think at all, you will see similarities that get repeated through history. One question I always get at talks is how could the German people, advanced in science, philosophy, art, accept the destruction of an entire segment of society, Jews? How could that happen?

My response [at a recent talk] was, we’re talking about Muslim bans now. You could see how it could happen. A rabble-rousing leader creates energy and destroys the free press and provokes fear.

That’s exactly what happened in Germany. He promises economic growth, economic victory at a time when the economy is not doing well. After World War I Germans were in a terrible situation. That was the growth of the Nazi party, 1919-1930—the promise of economic [victory].

Hitler said, I am the savior of our country. It’s very reminiscent of things we hear now. To think it could possibly happen in the United States is unbelievable. The nationalism is exactly what happened between World War I and II.

National populism happened in Europe—the French were out for the French, the Germans for the Germans. [In many countries] there were autocratic rulers [using] populism—when we look at ourselves, it creates dislike of the “other.”

What we have today—globalism is very important. This is one big world, and to think we should only look out for one small segment is going to get us into trouble. Reading The Devil’s Diary, you can see how that can arise. It’s amazing how history can repeat itself.

One of the biggest things the Nazis did was destroy the free press—the “lugenpresse,” the lying press. The parallel today is “fake news.” America First was a slogan of the American Nazi Party. It was put forth by Hitler to keep America out of the war. 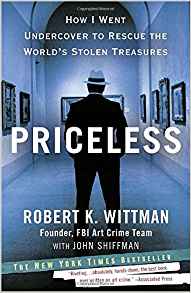 A: My first book is Priceless. It was a memoir of my career as an FBI agent. I was the first senior investigator of the FBI’s national art crime team—that’s how I got into this case. It’s art recovery, cultural property recovery. It was a New York Times bestseller, about 12 or 13 cases I did as an FBI investigator.

My second book is The Devil’s Diary. Now I’m doing one that’s a historical biographical book, like The Devil’s Diary, involving salvage recoveries from a sunken ship that relates back to the War of 1812. A big part involves Dolley Madison.