Michelle Adams is the author of the new novel Hidden Treasures. Her other books include the novel Little Wishes. She grew up in the UK and lives in Cyprus.

Q: What inspired you to write Hidden Treasures?

A: Hidden Treasures was inspired by a number of different things. I have long had a fascination with the events of the Second World War, and the lost artwork, and its possible whereabout intrigues me in particular.

Creating that element of Hidden Treasures was a lot of fun, trying to come up with an item that was small enough that it could be lost inadvertently, but that was also valuable enough to capture the imagination of historians alike.

Then, the story that spans the different generations comes from my experience as mother through adoption. It is impossible to consider that fact without considering also the other people involved: of course, my child, and her part in that, but also her birth mother’s story.

It is something I think about often, and strongly believe that her decision came from a place of love. That was something that I hoped to portray through Frances’s story, and the idea that sometimes people who take decisions that seem unimaginable do so for the very best of intensions.

Q: The novel alternates between the early 1980s and the present. Did you write the novel in the order in which it appears, or did you focus more on one time period before turning to the other? 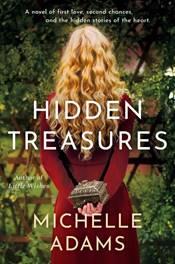 A: It was a lot easier to try to write the present-day story first, and then create the back story, even though I had most of the story in mind when I started writing. But when two times lines weave so intricately as they do here, it is impossible not to go back and forth in the process, because one timeline always informs the other.

Q: How did you create your characters Frances, Harry, and Tabitha?

A: Harry and Tabitha came to me easily enough, and their characteristics seemed to grow the more they interacted.

Frances was more complicated, I think, and Benoit too. But I think there are some elements of their experience which are fundamental, such as what it feels like to fall in love, or to fall in love and know that it’s wrong.

I think many of us have these experiences, and so it was about channeling that into the characters, and then putting them together to see how it played out.

A: Frances is really, for me, the heart of the story. I hope people can find a place to sympathize with her, and try to understand the decisions she took.

I also hope that people will think about how sometimes life is not black and white, that decisions and relationships are messy, and there is often little we can do to change that, and instead just have to find a way to work with it.

A: I am currently working on a book in the women’s fiction genre. It explores the relationships we have with ourselves, how we must first love and accept ourselves before we can love others, the concept of what it might mean to love somebody forever, and what that might look like in reality.