Q&A with Michelle I. Mason

Michelle I. Mason is the author of the new young adult novel Your Life Has Been Delayed. The book features a girl who gets on a plane in 1995 and lands in 2020. Mason lives in St. Louis.

Q: What inspired you to write Your Life Has Been Delayed, and how did you create your character Jenny?

A: I always loved time travel stories, but the point of most of them is that someone travels to another time, and the story is about how you get back.

I’m always writing something new, and will stick a note in my phone about my ideas. I wrote, What if you get on a plane, and when you get off, it’s 30 years later?

I wrote this note when I had gone to Australia with my husband. It was 11am in Sydney and 5am in Los Angeles, the same day, when we landed. It was like time travel!

I know that was just a time difference, but what if you did land, and it was a different year?

A year later, I came back to the note, and it connected with another idea—that the point is not to get back [from the other time period], but to live with it.

With Jenny, I’ve been writing young adult for a while. Who is Jenny, and what are the things she’d have to deal with if she was living with a time jump?

I started with a list of what are the worst things that could happen to this girl—family-wise, friend-wise, and the world around her.

She was an aspiring journalist because I’d looked up what are the jobs that would become obsolete, and journalism was not obsolete, but newspaper journalism had changed so much. It tied in really well for her.

Q: On your website, you write that you chose 1995 as the year Jenny takes her flight because she was the same age you were then, and also because of the technological advances during that time period. Can you say more about that? 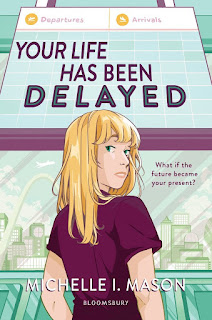 So much happened in 1995-96. Cell phones existed, but the flip phone became widely available in 1995-96. It was not super-affordable, but it was more affordable [than it had been], and it became more common for a middle-class person to have a cell phone instead of a pager.

With the internet, in the early ‘90s it was there, but search engines were lists you’d be looking through. That’s the hardest thing for a teenager today to think through—you think, It existed, so it must have been similar, but it was nothing like today. It wasn’t an intrinsic thing to look something up. But right after that, it exploded.

So soon after she left, things started to advance.

Q: How did you factor in the pandemic?

When the pandemic hit, we talked about it. If we had written it into the book, it would have completely changed the themes of the book, and we didn’t want to do that.

We could change it to 2019, but I liked the idea of 25 years, so we decided to keep 2020, with an author’s note that it’s an alternate 2020. It’s something I’ve talked about when I’m talking about the book, to explain the lead time of publishing as well.

A: I am a plotter, so I did work from an outline. I had the whole book planned out. The very ending has stayed the same, but the climax changed a few times.

When I first sent it out, Jenny's encounter with the conspiracy group was a little more extreme. My editor said, If you’re open to this, we’ll scale it back.

Q: The Kirkus Review of the novel calls it "Twilight Zone-esque" and the novel itself includes references to Back to the Future. Did either of those influence you as you were working on the book?

A: I’m not sure I’ve ever seen The Twilight Zone, so not really that so much.

But I grew up with the Back to the Future movies, and have seen them a million times. It’s referenced in the book. I loved Back to the Future, and the relationship aspects where [protagonist Marty McFly] is encountering his family.

A: I just turned in copy edits on my next book, My Second Impression of You. Sixteen-year-old Maggie, after the worst week of her life, gets an opportunity to relive the best day of her life through an app on her phone.

I’m playing around with a couple of other ideas.