Ashley Nelson Levy is the author of the new novel Immediate Family. Her work has appeared in a variety of publications, including BOMB and Electric Literature. She is the cofounder of the independent publishing house Transit Books.

Q: What inspired you to write Immediate Family, and how did you create your narrator?

A: I wrote around the story of a transracial adoptive family for many years because I had grown up in one myself, but it took a long time to figure out exactly what part of that experience I wanted to examine.

I experimented with many forms until I finally landed on the intimate second-person address. It opened up what I realized I was trying to do, which was lay bare some of the complexities in transracial adoptive homes while still capturing the love that lives there.

In terms of how I created the narrator, I suppose I spun her out of a giant ball of ambivalence.

She’s resistant to tell the story of her family because of inevitable power structures that are in place, she is the white sister and the biological child, and because she and her brother have had a recent falling out and she doesn’t want to look it in the face.

But she’s also compelled to tell their story, in part because her brother has asked her to by requesting that she give a speech on his wedding day, and in part because he’s one of the most important people in her life, their stories inextricably linked.

This question of perspective, of who gets to tell the story of a family and how that affects its shape, is the lens through which the entire book looks through.

There’s been a lot of conversation post the book’s publication about it reading like memoir, but that was never the form I was interested in for this project; that version of events wasn’t the truth I was after.

I fictionalized our story so that the book could have grit, so that it could explore, unapologetically, questions around race, adoption, fertility, the longing for and fear of motherhood, the many definitions of family, and how we can fail those we love, even though we love them.

I also wanted to take a hard look at whiteness and its effects on a home, and the form allowed me to circle those questions in a less conventional way, shuffling around in time, in memory, in adoption narratives in literature, in institutional documents, and so on. 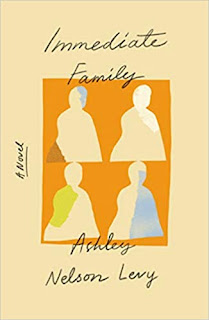 Q: In the New York Times review of the book, Jessica Winter writes, “At the time of the wedding she [the narrator] has spent months undergoing fertility treatments, and her desire to reproduce — her willingness to subject herself to endless tests, drugs and interventions to create a child who is genetically related to her — is both mirror and counterpoint to her parents’ aching, yearslong quest to adopt Danny.” What do you think of that description?

A: I was interested in the narrator’s grief and longing for a child mirroring that of her parents’, her mother’s longing especially.

I think in many ways the novel strives to be a new addition to the literature of motherhood. It doesn’t end with a baby in the narrator’s arms or any sense of a child in sight, but I think she would argue that this longing, this waiting, this physical and mental preparation for the possibility of a child, is a part of the experience of motherhood.

She also considers her relationship to her younger brother and role she may play as caretaker one day, when the immediate family becomes just the two of them. She says at one point, “I don’t know what scares me more, the idea of life without children, or without parents, or being the only parent you have left.”

The prospect of that responsibility, of being elevated to something other than older sibling, is something that frightens her throughout the novel, but it’s also something she ultimately makes peace with at the end, in her own way.

A: I always liked this title for a few reasons. There’s the play on the word immediate: Danny becomes the narrator’s brother the instant they meet that afternoon in the orphanage, but there’s also a strangeness in that sense of immediacy because they’ve waited so long for it.

I think the title also alludes to the fact that this is a book about the core unit—no other characters outside of the four of them get much airtime except for the narrator’s husband, but he’s not central.

And there’s the immediacy that the narrator longs for in starting her own family, but she’s stuck in a purgatory of waiting rooms and unsuccessful fertility treatments.

Q: In a conversation with writer Katie Kitamura on bombmagazine.org, you say, “I’ve heard the novel described a few different ways but this is how I’ve always thought of it—that the central tension is how a story should be told, or if it should. The opening section asks, ‘What right did I have to speak of your life?’ and then wrestles with an answer for the remaining pages.” Can you say more about that?

A: The question of perspective is what made the book interesting to write. It also felt risky. There are power structures in play as I mentioned before that needed to be examined. She is the white older sister, the biological child—these things affect the shape of the story and she reckons with that.

The novel centers her story but that inevitably includes the story of her brother and she’s careful about what the boundaries of appropriation are—throughout the novel she questions them.

The book makes formal choices in navigating this; she never tries to inhabit his thoughts. Instead the narration lives in this transitional space, when the lines between their stories blur, and much of her brother’s character remain absent throughout, in all the places where she simply cannot know his perspective.

A: I’ve got a new project in the works, too early in the process to talk about with much intelligence. I just read this kind of perfect description of writing in bell hooks’s book of essays, remembered rapture.

In many ways I hope that’s what Immediate Family is. I’m off to find new secrets now.