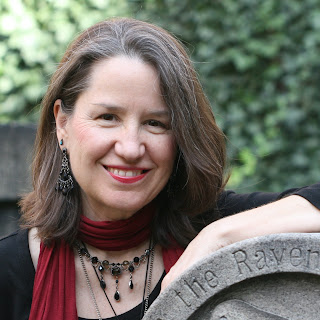 Mary Amato is the author of Star Striker: Game On!, a new middle grade novel for kids. It's the first in a new series. Her other books include the Lucy McGee series. She is also a singer-songwriter and a cofounder of Firefly Shadow Theater, a puppet company. She lives in Hyattsville, Maryland.

Q: What inspired you to write Star Striker: Game On!, and how did you create your character Albert?

A: I got the idea for an interstellar soccer tournament years ago while driving my own two boys all over the universe for their soccer practices and games.

At first, I imagined the series as entirely funny—more like my Riot Brother series. I even outlined a few of those short, funny books. But for whatever reason, I sat on the idea. Then, in 2020 I pulled the project out of the back drawer, dusted it off, and pitched it, and got a contract.

But when I sat down to write, this seventh grader with a host of insecurities named Albert Kinney simply appeared and took over. I can never quite explain how that happens.

I had to call my editor and explain that instead of writing short funny books for ages 7-10, I was writing a more serious—although still with funny parts!—series for older readers. Luckily, my editor was open to the change!

A: Teams really have different vibes. One team can feel like family, another team can feel toxic. I wanted to explore the ironic idea that Albert finds family very far from Earth.

The focus of the Zeenods is on teamwork. They help each other and play as one. This way of playing gives Albert the connection he once had on Earth and has lost, a connection he craves. Playing with the Zeenods teaches Albert how being less self-centered can help him build a stronger sense of self. 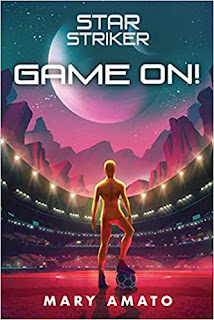 Q: How would you describe the relationship between Albert and Tackle?

A: Tackle, the ridgeback, is such a fun character to write. I was terrified of dogs as a kid, and I’ve been trying to work through this by creating a character in Tackle who I can love!

In the dog, Albert finds a surprising confidant, friend, and protector. In Albert, Tackle finds someone—finally—who values his intelligence and skill. They need each other.

A: One of the best things about a children’s book is that it can provide an opportunity for a reader to find a kindred spirit in a character. That experience can give a kid a sense of belonging. As a kid, I found my belonging in books.

The funny thing about writing sci-fi or fantasy is that, of course, no kid is going to have an experience like Albert’s, of being beamed up to play interstellar soccer; but every kid is going to experience hearing the voices of anxiety, fear, self-doubt, and jealousy just as Albert does.

Throughout the first book and the rest of the series, Albert learns how to acknowledge and deal with those challenging inner voices, and I hope Albert’s journey gives kids out there the inspiration to acknowledge their own emotions.

A: In 2022, I have a picture book coming out illustrated by the wildly talented Rashin Kheiriyeh about a cat. I’ve finished the second book in the Star Striker series, which will come out in 2022, and I’m starting on the third.

A: I love teaching and offer a weekly session for writers of all stripes. It’s my favorite part of the week and some of my best insights/ideas come from those sessions. https://www.maryamato.com/writers-studio/

In December, I’m also offering a series of 12 writer’s prompts on social media called The Twelve Days of Writing Prompts.

Here are my SM contacts.