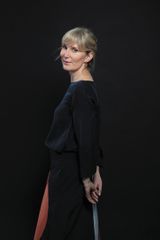 Lisa Harding is the author of the new novel Bright Burning Things. A writer, actress, and playwright, she lives in Dublin, Ireland.

Q: What inspired you to write Bright Burning Things, and how did you create your character Sonya?

A: I have lived a life affected by other people’s alcoholism, and I have long been obsessed with trying to understand the compulsion to drink.

This novel was my way of inhabiting that addictive mindset without judgement. It is an act of compassion and empathy on my part, even though my main character, Sonya, is a hugely frustrating woman.

A mother who puts her own child at risk through her drinking is hard to like, but by fully entering her psyche I came to a better understanding of the deadly battle people suffering with addiction fight every day.

I wanted to depict an honest portrayal (no glamourising, no sensationalising) of a woman fighting with her destructive impulses and accessing her own idiosyncratic journey to recovery.

There is huge maternal love, albeit blighted by a traumatic past and addictive drive. Sonya is a creative, magical woman who learns to channel her destructive impulses through the novel in a more positive way. She first needs to learn to mother herself before she can become a mother to her young son.

Q: In a review in The Guardian, Jude Cook writes, “Written with great energy and generosity, Bright Burning Things is the raw and emotional story of a woman’s search for self-knowledge; one that grips from the beginning.” What do you think of that description?

A: I love this description. It is a perfect encapsulation of what I set out to do as described above. I love that he noted the “generosity” and the “energy” and that it “grips from the beginning.” A review every writer dreams about!

A: I never know what will happen when I sit down to write…

With this novel, I had a character and an insistent voice that spoke through me and dictated the action on the page. The novel changed shape many times through the writing process.

Initially, I had Sonya’s little boy, Tommy, speak in his own chapters, but by the final draft I removed them from the pages. This gave the reader a heightened sense of jeopardy when he is taken away from Sonya, although the undercurrent of his presence lives on.

Ultimately, staying inside Sonya’s head makes the experience a more immersive one. The reader is living through every beat and agony of separation anxiety in the same way she does.

Also, with each draft I made sure to introduce a note of hope each time, so that by the end of my seventh draft, there was more magic and love than I had anticipated when I wrote the first (very dark) draft. It became more spiritual and hopeful, and I am glad about that.

So much of writing for me is in the rewriting, the shaping, polishing, and honing. It’s fascinating to see the shape emerging as I edit. I tend to let myself make a mess and then go back in and ask myself the difficult questions.

A: The title changed right at the final edit. For a long time, the working title was Overspill, which pretty much sums up what the novel is about: the intergenerational overspill of alcoholism and trauma.

I felt ultimately that this was too obvious, and lacking in any kind of poetry, grace or mystery. Bright Burning Things is telling it slant. It signifies both mother and son’s fascination with danger and the extreme. Fire imagery runs throughout the novel, both in the literal sense and a more metaphorical “burning down” of the house: a purification of sorts.

Also, the character of Sonya is a firework: beautiful, dangerous, and reckless.

A: Currently I’m working on a film adaptation of my first novel, Harvesting, about the sex trafficking of teenage girls in Dublin today. I am co-writing with the director of the Derry Girls, a very popular Irish show set during the troubles in Northern Ireland. We are in development with the British Film Institute.

I am also heading into a major rewrite of my third novel, which broadly can be called a “cult campus” novel. It is at the very messy stage!

A: As an Irish writer this is my first time being published in the U.S., and I am thrilled to be with the amazing Harper Via team. Bright Burning Things has also been optioned for film.