Q: What inspired you to write Protest!, and how did you choose the examples of protest that you included in the book?

A: We have been involved in activism for several years ourselves and it’s been one of the most meaningful experiences of our lives. The idea behind Protest! was to tell the stories of the movements that inspire us.

There are so many amazing examples from history of collective action making a difference that we couldn’t write about everything, but we tried to include demonstrations from all over the world which show how broad the definition of protest can be.


We could have structured the book in lots of different ways but in the end we decided to arrange it more or less chronologically. At the end of each chapter we added a short “Tactics” section of actions collected around different themes like Art, Gardening, and Sports, hoping to make the book accessible to children with different interests.

A: We were lucky to be able to use the fantastic libraries of our home city of London, before the pandemic struck, about halfway through the research. After that we were able to find most of what we needed online.

We started with a broad sweep of the history of protest, filling in the gaps in our knowledge. Once we knew what we wanted to include it was a matter of drilling down into the individual movements, reading and watching analysis, testimonials, and documentary films.

We wanted to make sure we understood the wider context behind each protest and find details that would bring the stories to life.

One of the things that surprised us was that this kind of book didn’t already exist, and we had to go to so many different sources to find information.

We were excited to find out about protests we hadn’t known about before, and which are not much spoken about: for example, the pyramid builder’s strike with which we open the book, and the women’s march in Ancient Rome.

Once the text was written and the drawing started, Emily had to undertake visual research, getting a feel for place and costume in particular, then distilling these to make her own imagery. 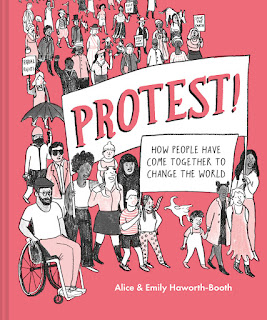 A: As with the research, it began in person and had to move to co-writing online, but it actually worked really well – working remotely meant we could both type into the same live document simultaneously, making it a truly collaborative experience.

We had lots of giggly Zoom calls that kept us going through the hardest days of the pandemic.

We both had equal input in terms of writing the text, and divided up the research into topics we were particularly interested in. When it came to the visuals, Alice designed the book while Emily illustrated, and we worked collaboratively on the composition of each spread, sending roughs back and forth until we were both happy.

We love working together and after finishing the book it was hard to go back to working alone!

A: One of the most important themes in the book, and a thread that runs through all the stories it tells, is community and the friendships that create and are created by protest movements.

The book includes protests that some might describe as failures, but we found again and again that the act of coming together in dissent and disobedience gave movements value beyond their stated goals.

Reading and writing about these protests made us think about what success means in activism and we hope that the book will encourage children to ask this question for themselves.

We also hope the book will be a practical resource for activists of all ages, who will be able to draw on the creative and humorous ideas that the history of protest has in abundance.

A: We’re both working on our own writing and drawing projects at the moment, alongside Emily’s teaching and Alice's graphic design practice, but are looking forward to working on another children’s book together soon.

A: We loved writing this book for children – they have an innate rebelliousness that responds with glee to stories of disobedience which are so often playful, joyous and funny – and unlike many adults, they have no shame in refusing things they don’t like and aren’t embarrassed to imagine a better world. We can learn a lot from them.