Warren Ashworth and Susan Kander are the authors of the new novel We, the House. Ashworth is an architect and an instructor of design and of architectural history at the New York School of Interior Design. Kander is a composer and playwright. They live in New York City.

Q: What inspired you to write We, the House, and how did the two of you collaborate on the project?

A: The inspiration came to Warren in an instant. This book started in his head one New Year’s Eve in the dining room of some friends.

This couple, former clients of Warren's, live in an 18th-century farmhouse that they restored with the utmost attention to detail. There were eight guests sitting around the dining room table eating sumptuously and enjoying the champagne, the company, the candlelight, and the fire in the fireplace.

An anonymous early-American portrait of a woman hung on the wall in the place of honor over the sideboard. I was seated next to our hostess who was relating to the group some story about the restoration, and then she turned to the portrait and said to her, “But you know all this, don’t you?”

Warren started the book six days later, using his great-grandparents' house Ambleside as the foil for the book's version of the portrait.

As far as working together, it came about as follows: Warren is a member of a writers' group in New York City and it was among this group of talented and supportive people that the first two chapters were read.

One of the group offered – in the politest way - that the two protagonists’ voices seemed rather similar. Warren had been sure that he had rendered them marvelously distinctly, but realized then that he was mistaken. He decided he needed some expert help.

The person Warren turned to was the person he hired back in 1980 to be his assistant in his cabinet making business, Susan Kander. This person was going home after building cabinets by day to write plays late into the night.

While Warren and Susan were installing custom kitchens, she was in evening rehearsals for her plays in downtown New York City. Warren and Susan later married and she went on to write librettos and compose operas. She was the perfect choice for a collaborator.

The process of writing was a remarkable one. The structure and scope of the novel were Warren's brainchild from the very beginning. The time frame and the march of episodes across the years all came quickly.

He did all the preliminary historical research, identified and created the events of each chapter, creating the outlines of all the characters as they came, writing each chapter longhand. Then he entered it into the computer and sent it to Susan.

Susan sharpened, enlarged, and enriched the characters through their language, adding detail to the visual pictures and the interactions between characters.

The best description they have come up with is that Warren wrote the chapters in black and white and Susan blew color and detail into them.

Q: Why did you decide to use the first-person plural for the character of the house?

A: This decision came to Warren right at the beginning. Ever since he was aware that the Talk of the Town pieces in The New Yorker were always written in the first-person plural, he has been fascinated with this use of the language. And, as a life-long admirer and designer of houses, he knew immediately that houses speak in the plural.

A: We were deeply fortunate to have a wealth of information about the Hart family. Surprisingly, this did not come down to us as bits of records passed on by previous generations but rather had been discovered, copied and filed by the current owners of Ambleside, Brent and Sheree Rueb.

This dedicated couple have made it their life's work to restore the house and to find out all they can about its original inhabitants. When we first met them - and Ambleside - in June of 2007, they showered us with a wealth of information and photographs about the house and the Hart family. 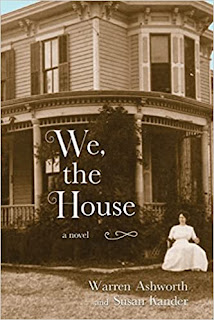 We also had regular access to the Harvey County Historical Society's archives on Ambleside, Henry Luke Hart, and the Nicholson family, which became quite prominent in the town of Newton, Kansas.

For instance, the chapter "Of Sheets and Blankets" makes reference to the presence of Black children in the Newton elementary school. Whether or not they should be invited to daughter Jessie's eighth birthday party is the source of considerable friction between her parents.

For this chapter, we were fortunate to get, from the Ruebs, photographs they had found of Jessie's entire third grade class which had, among the thirty or so students, seven Black children.

Genealogical records, while always fascinating (to the descendants and usually no one else - as many a bored dinner guest will attest) do not speak of personalities. We also have almost no correspondence among the family members. So, this freed us to invent, while being true to the family tree.

Warren's only direct connection are memories of his grandmother Edith, one of the Harts’ three daughters, who moved to Santa Barbara - after she eloped - at 19. He remembers her to be a deeply bigoted woman, harsh and forbidding.

The authors felt sure that her bigotry would have been learned at someone's knee, and it didn't seem plausible that a man who had dedicated almost five years of his life to the Union cause, plus many more years in recovery, would be the one to instill such feelings in his children. Thus Emmaline became the source.

The history of Ambleside is quite accurate as to when it got plumbing and electricity. The wallpaper installation is imagined, but the Ruebs indeed found many layers of wallpaper in place in 1994 when they bought the run-down house.

Lastly, and importantly, Warren and Susan are deep admirers of the scarce work of Ammi Phillips. A name lost in the dust of history until it was unearthed in 1978, thanks to detailed scholarship.

Since then, the portraits of this man, who used to be known as the Border Limner and, alternatively, the Limner of Kent, have been avidly collected. Sublime examples of his work permanently grace the walls of The National Portrait Gallery and the Metropolitan Museum of Art, among many others.

Mrs. Peale and her portrait are fictional. This fiction was created because the authors wanted to speak of how the monetary value of art can distort its place in society.

A: Warren would like readers to ponder if a house can have a soul, and if so, are only certain houses so imbued? Why do some houses thrive in our memories while others just disappear? Do we affect the house with our presence or does the house affect us?

Susan hopes readers will insert themselves into the hearts and experiences of both Ambleside and Mrs. Peale, as well as the living characters.

She hopes the book is cinematic enough to allow readers to place themselves inside the human episodes along the historical timeline, to feel they are as much a part of the action as the two protagonists.

And she hopes it draws readers into the sweep of this country's social history as a living thing, not a thing of the past.

A: Warren and Susan have a number of chapters written of a new work of historical fiction about another historic house. The book is currently called Mattie. It takes place during one week at Glessner House in Chicago. This is Chicago’s most important house museum.

The house was designed by Henry Hobson Richardson in 1885 and was completed shortly after his untimely death. He is the book’s narrator and spirit guide, though he has been dead for six years at the time of the action.

The protagonist is Mattie Williamson. This was a real person who was the Glessners’ cook for 20 years.

The action centers around two dinners she prepares in one week in 1892 – one an intimate dinner for eight in honor of the pianist Jan Paderewski, the other a dinner for the entire Chicago Symphony Orchestra. Both these dinners actually happened in that year.

The book concerns the labor strife in the 1890s, cooking, servants, architecture, art, and pigeons. The research for the book is supported by Glessner House and its writing has been approved by their board.

Warren has written a memoir called Ten Recipes but has not looked into getting it published. (Susan is urging him to do so!)

A: This remarkable residence, Ambleside, has been the centerpiece of an architectural history lecture Warren teaches every year at the New York School of Interior Design and sometimes at Mohonk Mountain House and SUNY Ulster.

The lecture is on the invention of balloon framing in this country. Balloon framing was initially a derogatory term; Mrs. Peale’s revulsion about it was a commonly held point of view in the eastern United States until well into the 1870s and 1880s.

“Balloon framing” has largely been replaced by the terms “platform framing,” “stick framing,” or, because it is so ubiquitous, simply “framing.” As in, “a frame house.”

This type of construction—supporting a building with two-by-fours, 16 inches on center, with wider two-by members for the rafters and joists—was invented in Chicago in 1833 by Augustine Deodat Taylor. This amazing invention is little known and less studied.

Though some scholars still dispute its origins, what is undeniable is that westward expansion in this country would have been vastly slower if this simple, fast, and inexpensive method of construction had not been invented.