Gloria Amescua is the author of the new children's picture book biography Child of the Flower-Song People: Luz Jiménez, Daughter of the Nahua. Also an educator and poet, she lives near Austin, Texas.

A: After finding a pamphlet about Luz Jiménez and being awed by her life, I kept it, not know what I would do with it. Several years later when I started writing children’s stories, I knew I had to write about her.

I was greatly affected by Luz Jiménez’s story because of the many obstacles she overcame, including the shaming of her native language and culture when she was a child, as has happened in this and other countries.

I felt connected to the shaming of her language and traditions, the attempted erasure of the Nahua culture and her pride in her people.

I didn’t get to have that connection to my culture and language because of the way society treated Mexican Americans when and where I was growing up.

My parents didn’t speak to us in Spanish to make it easier on us. So I lost much of Spanish and culture, even though my father was from Mexico and my mother was Mexican American. I’ve tried to regain as much as I can.

I am proud of Luz for helping preserve her culture and language and felt compelled to tell her story.

A: I started out searching online and found one of the professors who had written about important indigenous peoples, including Luz Jiménez.

I contacted a professor I knew who introduced me to Dr. Kelly McDonough. Not only did Dr. McDonough lend me resources, she offered to connect me with Luz Jiménez’s grandson in Mexico, Jesús Villanueva Hernandez.

Jesús also sent me resources, and we corresponded through emails over the many years it took to get this book published. I am so grateful that he believed in me and continued to support my efforts.

Besides articles online and books those led me to, the most important source was Doña Luz’s voice coming through her stories and experiences, Life and Death in Milpa Alta: A Nahuatl Chronicle of Díaz and Zapata, translated and edited by Professor Fernando Horcasitas and published after her death.

Of course, I also researched many other aspects, including Aztec mythologies, the Mexican Revolution, Nahuatl pronunciations, the artists for whom Luz modeled and their art work, etc.

I was surprised and saddened that even though Luz became a model for many famous artists, she struggled financially all her life. 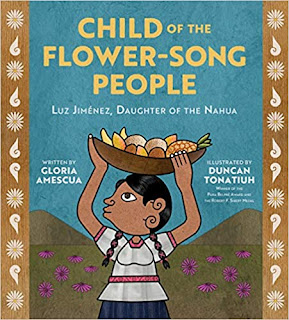 Q: What do you think Duncan Tonatiuh's illustrations add to the book?

A: Duncan’s unique artwork is perfect for this book about a Nahua girl and her life. His pre-Columbian Mixtec style connects her and her surroundings to the indigenous past but also the present through his collages.

I love the different flowers echoing the flower-song of the Nahua, especially where Luz is teaching and the words become floating shaded flowers, then brightly colored, and finally planted blooming by the students. It’s visual poetry!

I love the outlined carvings in the mountains depicting stories, the speech bubbles, Luz’s head filled with Nahuatl, the colors, and the natural landscapes.

Many of his illustrations are a take on the art for which Luz modeled, which helps readers connect to it.

I can’t say enough about how Duncan’s illustrations create a beautiful visual story bringing Luz Jiménez to life! I am greatly honored that Duncan wanted to illustrate this story.

Q: The Publishers Weekly review of the book says, “Jiménez is portrayed as a curious, ambitious person who, from a young age, treasured her heritage and was determined to preserve her threatened culture despite hardship, discrimination, and colonialism.” What do you think of that description, and what do you see as her legacy today?

A: That review captures the essence of the story beautifully. Luz Jiménez’s legacy lies in how she shared the dignity of the indigenous people and honored them by sharing their culture through art, stories and language. She exhibited her pride in being Nahua.

Luz’s grandson, Jesús Villanueva, has worked to preserve her legacy.

I hope this book extends the impact of this amazing woman and that readers realize that we all have a culture of which we can be proud. Luz’s culture not only looked to the traditions of the past but also what she dreamed for the future.

I hope that kids see the value in their own and others’ cultures. Everyone has a culture, not only what is passed down to you but also what you choose. It’s important to be proud of who you are.

A: I’ve been working on another picture book biography and a fictional bedtime picture book. Both are on submission.

Frankly, I’ve been so busy learning about the promotional aspect of being a published author that I haven’t been writing any new stories, though I have quite a few already written that I want to get published.

I’ve found that being involved in debut groups, presentations for conferences and schools, interviews, and social media take up most of my time. I admire others who do all this and continue to write new stories.

A: I’d like to explore writing in other genres, especially middle grade, perhaps novels in verse or possibly a graphic novel. I’m taking very small steps in this direction, which actually just means I’m thinking about it and I’ve read a lot in these genres.