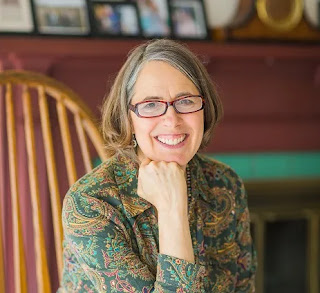 Annette Bay Pimentel is the author of the new children's picture book biography Pura's Cuentos: How Pura Belpré Reshaped Libraries with Her Stories. Her other books include All the Way to the Top. She lives in Moscow, Idaho.

Q: Why did you decide to write a picture book biography of Pura Belpré, and what do you see as her legacy today?

A: My family lived outside of the United States for several years, and one of my daughters attended a Bosnian-language kindergarten when we lived in Sarajevo. She spoke very little Bosnian, and at the beginning it was not a happy experience for her.

But a very perceptive librarian noticed how sad she was and suggested I start coming in once a week to do an English language storytime with all the kids. It was only a few minutes on a single day of the week, but it made a huge difference for our daughter. She got to hear the stories she knew and loved, and her classmates shared those stories with her.

Pura Belpré was a pioneer of the bilingual storytime and an advocate for expanding the books on the shelves of libraries to include many cultures. Our family owes her a great debt for the movement she started among librarians, like our Bosnian librarian.

Her work helped explode the canon as she invited kids to celebrate their own stories and to listen in their mother tongues. It’s exactly what librarians today see as their mission, and it started with her clear-eyed vision.

Q: What do you think Magaly Morales's illustrations add to the book?

A: Magaly’s art is so dynamic! Every page has a feeling of movement and energy. 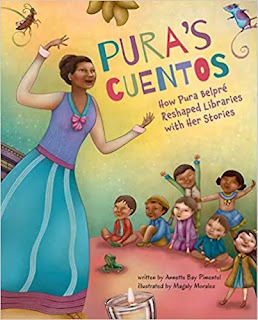 She also was a great problem-solver. Despite my best attempts at research, I could not determine exactly how Belpré advertised her earliest bilingual storytimes. My editor and I danced around the problem, trying clunky work-around after clunky work-around to keep the text absolutely true to the facts.

But it was the art director and Magaly who solved the problem. Magaly made a really funny illustration showing Pura Belpré shouting at kids in a playground—obviously not literally true, but conveying the message economically and elegantly.

Q: What do you think the book says about the importance of storytelling, whether or not the story is in a book?

A: The act of publication gives stories weight and gravitas. Sometimes that can make people feel marginalized—they don’t see themselves in those fancy bound books.

I hope kids who don’t see their lives reflected on the shelves of the library will see it as a failure of publishing instead of as a personal failure.

And I hope they’ll write down their stories for the rest of us!

Storytelling is the way we develop empathy and learn to consider things from somebody else’s point of view.

Q: How did you research Pura Belpré's life, and did you learn anything that especially surprised you?

A: Pura Belpré left many thoughtful essays about writing and librarianship. I relied on them, reprinted in academic books as well as in manuscript form in her archive at Hunter College in New York City. I also got to actually hold the beautiful marionettes she helped a Boys’ Club build in the New York public libraries in the 1940s.

The most wonderful part of my research, though, and the one that most helped me feel like I had met her, was interviewing the people who worked with her. Everyone talked about her expressiveness as she told stories—Magaly captured that perfectly!

I also got to talk to one of the children—now a retired grandpa!—who attended her storytimes. He told me that her fanciful stories about cockroaches and mice had transformed his world, changing his squalid walk-up apartment into a place where he could believe enchantment was possible.

A: In April I have a new book coming out, Before Music: Where Instruments Come From. It’s a departure for me. My other books have all been biographies but this is expository nonfiction, exploring geographical and scientific ideas about how people create music.

Madison Safer is the illustrator, and I find myself wanting to print out all her art for this 88-page, oversize picture book so I can hang it on my wall.

I’m also working on finding a home for a picture book biography about another visionary woman.

A: As a child I was convinced I didn’t like nonfiction, so it still surprises me that I’m now a nonfiction writer! But today’s nonfiction is very different from the dry, encyclopedic nonfiction of my childhood.

I believe we are in a golden age of children’s nonfiction, and I’m grateful to teachers and librarians who point kids to not only great works of fiction but also to outstanding nonfiction books.

The way I see kids engage with real world issues in both fiction and nonfiction gives me a lot of hope for the future.