Thuan Le Elston is the author of the new novel Rendezvous at the Altar: From Vietnam to Virginia. It is based on the lives of her two grandmothers and her husband's two grandmothers. Elston was born in South Vietnam in 1966; she and her family fled Saigon in 1975. She is a member of the USA Today editorial board.

Q: In a USA Today interview with book critic Thuy Dinh, you said, “I kept thinking about how much all four of our grandmothers had lived through and how I needed to record it all in one place for my children.” Why did you decide to write the book as a novel rather than a memoir?

A: I was inspired by four real women, but I needed a fictional vehicle to carry the reader along from grandmother to grandmother.

When I met my husband’s maternal grandmother in 1992, Anne was already on her deathbed. I never got to hear her voice, watch her move.

But I needed her to tell her side of the story, so I created whole conversations that Anne has with the reader – based on what my mother-in-law told me about her mother, who grew up in Virginia then lived a “Mad Men” glamorous life outside Manhattan and retired in Southern California.

I also turned my paternal grandmother, Kim, into a family historian to help readers unfamiliar with Vietnam and its history. In recounting history to her grandson, Kim is also telling her story through French colonialism and the Vietnam War.

And then there’s the matter of the ending, where the book arrives to compare gender roles, parenting, aging, and dying in a multicultural family. I had to make all that up.

But along the journey are real details that I want my kids to know about the people they came from, the people whose blood runs through their veins.

Q: What did you see as the right blend between fiction and history as you worked on the book?

A: In my first try, I knew it was important to put all the family history down then worry later about where to fictionalize in order to try to make the book a good read. 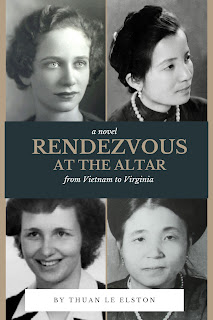 On my side of the family, I’ve been listening to my elders tell stories all my life, so it was easy.

With my husband’s side of the family, I interviewed my parents-in-law for details and stories. And my father-in-law actually had already done the work years ago when he basically interviewed his mom over letters about her life. When I started digging for my novel, he handed me all these letters.

And off I went, adapting Mary’s letters and words to show what it was like to grow up in Great Depression Midwest. You couldn’t make up stuff like getting burlap underwear for Christmas. Or why Muscatine, Iowa, was the “pearl button capital of the world.”

Drawing from family anecdotes and photographs, genealogy records, old letters, and new emails, I mix nonfiction and fiction like a cocktail. What I serve are intimate diary entries, revealing conversations, and epic family reunions.

Q: In the USA Today interview, you said, “Point of view was the hardest part in writing this novel.” Can you say more about that?

A: At first, I didn’t want to write a first-person novel – me me me. I wanted the book to concentrate on these four women. But agents who turned me down all said the same thing: There needs to be a thread tying these four chapters together, a narrator.

You have to know that I’ve been keeping journals since my teens. And now with each of my four children, as they prepped for college, I’d keep a journal for that child – recording not only their last years in high school but also literary quotes, poems, interesting tidbits about science, religion, movies.

So I had to bring myself into this novel, using a mother’s journal to her children as the narrator to introduce to my kids each of their great-grandmothers. But once I gave in, everything just flowed and I couldn’t be happier.

A: Four women, two from Vietnam and two from America. Yet the two Vietnamese shared a culture but lived very differently, and the two Americans might as well have come from different planets.

This is not a Vietnamese American book. It’s not an Asian American book. This is a novel about four women whose descendants formed an American family. According to the Census Bureau, America’s multiracial population was 9 million people in 2010 and is now nearly 34 million, a 276 percent increase and 10 percent of the population.

A: I have a title, “Saigon: April 30, 1995.” I have a beginning and an ending. It’s exciting and scary at the same time. It’s one day, inspired by the two years my husband and I lived in my birthplace after President Bill Clinton lifted the trade embargo on Vietnam.

A: You know this all too well, Deborah! Talk to your family members. Hear their stories. Get the details. As I wrote in Rendezvous at the Altar, channeling my maternal grandmother, Vu Thi Ty: Once upon a time was not a fairy tale. Just as lacquered ebony teeth used to be fashionable in Vietnam, once upon a time was the norm.