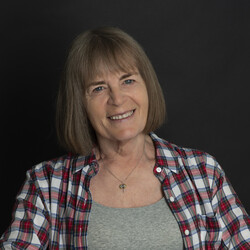 Zoë Playdon is the author of the new book The Hidden Case of Ewan Forbes and the Unwritten History of the Trans Experience. It focuses on a landmark legal case in the UK. Playdon is the Emeritus Professor of Medical Humanities at the University of London.

Q: What inspired you to write this book about Ewan Forbes and his legal case?

A: Few people know that for decades, trans people self-identified, accessed affirmative medical care, corrected their birth certificates, and lived unproblematically in complete equality with everyone else.

But in 1970 UK trans people were stripped of their civil liberties, became socially excluded, and were subjected to an abusive medical regime that included conversion therapy and compulsory sterilisation.

Ewan’s legal case, decided in 1968, precipitated those changes, which damaged the lives of countless trans people. All the records of Ewan’s case were removed from public eye, the press gagged, and everyone involved in it sworn to secrecy, and so this crucial piece of trans history is unknown.

I felt it was important for people to know that trans equality used to be straightforward, and that it was deliberately removed to solve a political, constitutional problem – securing male-primogeniture inheritance to the British throne – which no longer exists.

Q: How would you characterize the attitude in Britain toward trans people in Ewan’s younger days and during the time of his case?

A: Ewan was born in 1912 – he’s the earliest example I have of a UK trans boy self-identifying and getting affirmative medical care – at a time when there was a well-established scientific recognition that some people have variations in sex characteristics that position them between typical male-female binaries.

So he grew up in a general social environment that accepted that some people’s sex was different from that assigned at birth.

In the 1930s, it was generally trans men, like the athlete Mark Weston, who attracted public attention and it was believed that trans men vastly outnumbered trans women, who were considered a rarity.

But in the 1950s, the world-wide publicity given to Christine Jorgensen in the US and to Roberta Cowell in the UK shifted that perception, and in the early 1960s, the publicity given to model and actress April Ashley cemented the social image of trans people as exquisitely beautiful “sex changes,” with trans women believed to vastly outnumber trans men. In fact, the issue wasn’t numbers but visibility.

Apart from these exceptional, well-known examples, trans people, both men and women, simply went through supportive medical and legal processes and lived their lives like anyone else.

No one knew they were trans, or if they did know, they regarded it as a purely personal matter of private medical history. This was the case for Ewan until he was in his 50s.

But in 1966, when his cousin John announced that he was taking Ewan to court to prove that he “is now and has all along been of the female sex,” Ewan knew, as a doctor, that the medical climate was changing dramatically.

A group of US psychiatrists, notably John Money, Richard Green, and Robert Stoller, were busy claiming that being trans was a mental illness caused by inadequate parenting, and that they could remedy it.

In 1962, the first Gender Identity Research Clinic was opened at the University of California, Los Angeles, to “cure” trans and gay people by a range of measures: aversion conditioning using either emetics or electric shocks, frontal lobotomy, psychotherapy, and electro-convulsive therapy.

Of course, it was nonsensical pseudo-science, but in an aggressive turf war with endocrinology, psychiatry won.

In the UK, the affirmative care given by surgeon Lennox Broster and his team was being replaced by a psychiatric model led by John Randell at Charing Cross Hospital, who saw his role as being to
“breed out of our genetic inheritance those with psychopathic and adverse genetic propensities.”

The new medical environment would classify Ewan as a floridly psychotic lesbian with a perjured marriage: both he and his wife Patty would be liable to two years’ imprisonment, their lives ruined.

Ewan was much-loved by his community, but he was lucky to escape the systemic transphobia that overtook the UK from 1970 onwards.

A: Oh, I was constantly getting surprises, and sometime really big ones.

The first was that it took two years and the intervention of the Home Secretary to gain access to documents that should have been in the public record.

My starting point for writing was the court record of Ewan’s legal case, 500 pages of back-and-forth questions and answers. I went through it line by line, reconstructing what had happened in court, how the evidence had been presented and the narrative of Ewan’s life. 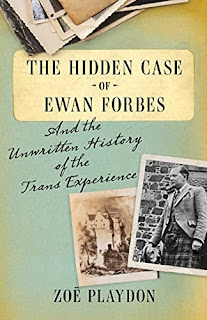 The next shock was that a trans man had inherited a male-line primogeniture baronetcy, something that we could never imagine happening today.

Clearly, something had changed, and so I backtracked to the first clinical categorisation of trans people in 1886 and went forward through medical literature, legal cases, and newspaper reports in the first part of the 20th century.

From that, and from the work of other historians, including unpublished doctoral theses, it became evident that for almost 80 years, being trans was classified as a variation of sex development, an intersex condition, and that the regimen was self-identification, affirmative medical care, correction of birth certificate, and an unremarkable life as an equal citizen.

And sadly, that was the next big shock, because since Ewan’s case, trans equality has been made to feel like an impossible dream.

Of course, I wanted to know what had happened after Ewan won his case. How had trans people suddenly been stripped of their civil liberties and what had the experience of that been like? So the next step was to work forward from Ewan’s case to the present day.

What I found was a mass of documents produced by trans activists in the 1970s and 1980s, all trying to make sense of what had happened to them.

It is really distressing material to read: a group of people who have suddenly been completely dispossessed and made subject to medical abuse, with no idea of why this has happened, and not even aware of what they were now allowed to do or be.

And like other ghetto archives, it is a very moving record of people trying to survive, and being obliged to accept the cruellest of conditions for survival: no employment rights, dismissal for being trans, unable to marry or adopt, and if unable to pay car parking fines, then sent to the wrong sex prison where women, certainly, were raped without it counting legally as rape.

They learned to expect to lose their jobs, homes, family, and friends, to be expelled from their church, sports teams, clubs, and societies. They knew they must never question their psychiatrist and must obey all their demands without argument, or they would get no healthcare.

To survive, the best chance was to move to another city, never speak of their past, not take any job with a pension or health insurance or social security or other benefits that required a birth certificate, and to accept that every interaction with officialdom would be exposing and humiliating because they would use birth names, pronouns, and titles.

The best to hope for was to live in hiding, hope not to get beaten or raped on the streets, and accept that if that did happen, the police would not investigate or provide any protection.

That was the legal regime until 1996, when the landmark case P v S and Cornwall County Council restored employment rights, and the official medical regime until the UK government accepted formally in 2002 that being trans was not a mental illness. I think that is the next shock for readers – that these events are so recent.

And the final shock for me was to discover how entrenched the British Establishment are in their protection of primogeniture.

When it was removed from the monarchy in 2013, there was a general expectation that it would be removed across the aristocracy as well. But now there have been six separate bills, one a year, entered into Parliament to try to end primogeniture – and they have all failed.

Q: What do you see as the legacy today of Ewan Forbes and of his legal case?

A: I see it as a dual legacy, both sweet and sour.

On the sweet side, we know that trans children were self-identifying and receiving affirmative medical care a hundred years ago, and that Ewan led a happy, fulfilled life. That puts the present moral panic about supporting trans children into a new perspective.

It’s also helpful to know that for a long time, it was believed that there were more trans boys than girls, then that switched to a belief that there were more trans women than trans men: it reminds us of the historical and scientific fact that we have no statistical records of the incidence of trans people, and that trans visibility is and has always been dependent on social nurturance.

And I think it is reassuring for the future to know that trans equality existed for many decades without being in any way socially problematic.

On the sour side, though, comes the uncomfortable truth that Ewan had to quite literally fight for his life in desperate circumstances, and that the consequence of his victory was a political crisis that was solved by putting trans people outside the social pale.

Two things, I think, are very hard to come to terms with.

The first is that historically, when we find a specific group stripped of their human rights, socially excluded, reviled by the media, and subjected to sterilisation, we term that not just a eugenic project, but genocide. It is unspeakably distressing to have to consider the possibility that the UK government effectively carried out such a project against its own citizens.

The second difficult thing to acknowledge is that it happened so recently and that most British citizens knew nothing about it. History was occluded by a social memory in which trans people had always been pushed to the social margins, and that this was justified because they weren’t “real men” or “real women.”

As we know from other periods in recent European history, once you’ve decided some individuals don’t count as “real people,” it becomes permissible to say or do whatever you like to them.

Those kinds of brutalities are not just devastating for the people themselves but are irreparably damaging to the societies that permit them.

Putting these two items together, Ewan’s legacy, perhaps, is to invite us to look at the century of trans lives that his life spanned and to ask ourselves, do we want our society to continue that kind of injustice?

A: Two quite different things. With my colleague Professor Jo Winning at Birkbeck College, I’m planning a research symposium on trans narratives, for 2022, to think about how we can create, structure, and critique histories that represent trans lives authentically.

I’m also continuing to work with my colleague Dr. Lisa Fenton at the University of Cumbria to develop our ground-breaking master’s degree in Bushcraft – Wilderness Living Skills, as it is called in the US – as part of a wider ecological initiative.

Finding better ways of treating each other and the world we live in seems to me crucially important for social justice and for species survival.

A: I’m absolutely delighted that in spite of the restrictions imposed by the Covid pandemic, we can still talk virtually to each other – but I’m also so disappointed, since I was really looking forward to visiting and spending time in the US, talking about these issues and getting to know each other better!