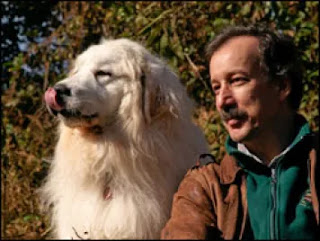 Edward Dolnick is the author of the new book The Writing of the Gods: The Race to Decode the Rosetta Stone. His other books include The Clockwork Universe. He is a former chief science writer for The Boston Globe, and he lives near Washington, D.C.

Q: What inspired you to write this book about the Rosetta Stone?

A: The story of how the Rosetta Stone was deciphered is one of the great detective stories ever, about a mysterious message that no one could decode and the two geniuses who set out to solve that gigantic, tantalizing riddle.

It's a story that people have heard of -- "Oh yes, the Rosetta Stone" -- but that hardly anyone really knows about. I wanted to tell that astonishing true story.

Q: How would you characterize the rivalry between Thomas Young and Jean-Francois Champollion?

A: The Writing of the Gods is about a race between an English genius, Thomas Young, and a French genius, Champollion.

The two men were opposites in almost every respect except that they were both brilliant (they had both been child prodigies) and they both had an uncanny gift for languages.

Young was an all-arounder who had demonstrated his genius in half a dozen fields -- he was a world-class physicist, a doctor, and a linguist, for starters, and all his contemporaries were in awe of him. Champollion was a man with a single focus -- he was obsessed with Egypt and nothing but Egypt.

They were opposites in temperament, too. Young was cool and calm, Champollion was fiery and temperamental. Each man started out thinking he was working on his own. Then each learned of the other's existence, and the race was on!

Q: What would you say are some of the most common perceptions and misconceptions about the Rosetta Stone? 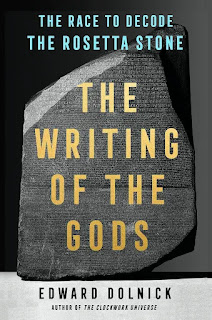 A: The Rosetta Stone is famous because it contains a message in hieroglyphs -- which no one had known how to read for thousands of years -- and the same message in Greek -- which scholars did know how to read.

Most people today think that hieroglyphs revealed their secrets as soon as the Rosetta Stone turned up. That's what the first scholars expected. They thought that learning to read hieroglyphs might take two weeks. It took 20 years!

The story of how our geniuses managed to crack the code, and why it was so hard, is the heart of The Writing of the Gods.

A: My book is called The Writing of the Gods because that's how Egyptians referred to hieroglyphs. Writing was an astonishing discovery, and we tend to forget just how astonishing it was.

Humans lived for tens of thousands of years before they ever learned to write, which means that everything they thought and said and hoped and feared is lost to us.

And then a few early cultures -- the Egyptians were one of the first -- learned to make squiggles and zigzags that let people speak across the generations and across the miles!

The Egyptians were so dazzled by the power of this new invention that they thought that humans could never have come up with anything so wondrous; surely writing was a gift of the gods.

For me, the message is that writing was an invention that surpasses other momentous inventions, like wheels and engines, because once you had writing, you had memory. You could preserve stories, you could speak to generations still to come, and you could listen to your forebears.

A: I'm working on a new book that also has to do with astonishing discoveries.

This time we're in the 1800s when people first dug up giant, mysterious bones that were far too big to have come from elephants or any other creatures they had ever heard of.

What could they be? Were they human bones, from some bygone race of giants? Were they from dragons that had once flown through the skies -- could the myths have it right?

No one, in the year 1800, had ever heard of dinosaurs. No one suspected that such creatures had ever existed. But then came the bones, and then more bones!

A: The Writing of the Gods is, above all, a story. It's about a mystery and a race and, best of all, it's a mystery where we have the clues right in front of us and we can work alongside the geniuses in the tale to see if we can fit together the puzzle pieces before they do.