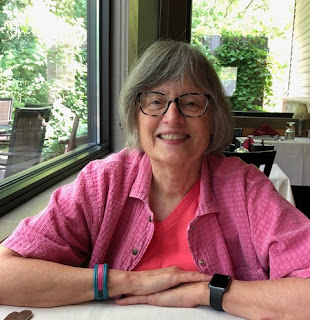 Barbara Gregorich is the author of the new young adult novel The F Words. Her other books include the novel She's on First.

Q: What inspired you to write The F Words, and how did you create your characters Cole, Felipe, and Treva?

A: Two things inspired me to write The F Words.

I’ll start with what came first: a vague dissatisfaction with the fact that, when I read YA fiction in which the main character is white, that character is usually middle-class, lives in a large house with a two- or three-car garage, has parents who are college-educated professionals, and goes to a good school.

But YA fiction written by “minority” authors usually present a different reality: economic hardship, poor schools, parents who are neither college-educated nor professionals.

Even though I knew that any YA novel I wrote would feature working-class characters, I wasn’t sure I would write a YA novel. But political events changed that.

In 2015 large pro-immigrant demonstrations took place around the country. The one in Chicago was attended by more than 20,000 people — many of them teens.

As I looked at the teens around me, I asked myself what was making them political. That was when I came up with the plot for The F Words.

Cole, the protagonist, is the character I created first. He’s the one I envisioned in the opening scene and inciting incident.

I worked on creating him as a contemporary 15-year-old high school student who believes in social justice, and whose father has just been sentenced to 120 days in Cook County Jail for organizing protests against the closings of public schools.

Part of Cole comes from what I hear teens say, what I see teens do, and what’s going on politically.

Felipe, Cole’s best friend since first grade, is a character I created in contrast to Cole in some ways. They are not clones of one another. Cole is more introspective, Felipe is more sociable. Very sociable, in fact. Felipe loves interacting with people, and his fellow students love interacting with him.

Felipe is Mexican-American, fluent in both Spanish and English, born in the U.S. To create him, I listened to Spanish-speaking teens and drew on what I knew of Mexican-American culture.

When I first created Cole and Felipe, I didn’t have a third character in mind. But by the time I got to the fourth or fifth chapter, I felt that I needed a strong female character (other than Stacey Renner and Ms. Delaney). Somebody Cole’s age.

During the time I was writing The F Words, Portland, Oregon, was in the news a lot. So I decided to have Treva be a transfer student from Portland, where she participated in boycotts against standardized state testing and rote teaching, and where she engaged in struggles for social justice.

It wasn’t until the fourth or fifth draft of The F Words that I realized I had created a minor motif of the-stranger-comes-to-town variety. Treva is that stranger, and she helps change the outcome of the problem facing Cole and Felipe.

Q: This is your first YA novel. Can you say more about why you decided to write for this age group? 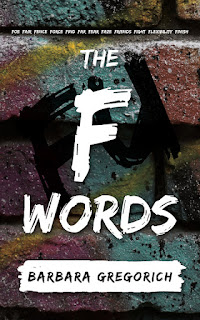 A: I read a lot of YA fiction (as well as a lot of adult fiction), so it seems natural that I would eventually write YA fiction. I’ve written books for preschoolers, primary-grade kids, and middle-grade kids, and also for adults.

If I think about these books as a kind of subject time-line, I can see that there’s a gap: no YA. That seemed odd to me and made me think I should try YA . . . as soon as I knew what my story would be.

The teen years are very important to a person’s life story. As teens we’re formed by the friends we have, the obstacles or opportunities we encounter, the teachers we have, and the decisions we make. This is a heady mixture, and I really wanted to try my hand at everything in the mixture — the friends, the obstacles, the opportunities, the teachers, and the decisions.

A: One of the college classes that deeply influenced me was History of the English Language. There I learned not only about how revolutionary a development it was for a language to drop gender and possessive endings, and depend on word position to determine meaning — I also learned about how words came into our language, and from where.

Specifically I remember learning about the importance of words from Anglo-Saxon. So many of these words started with the letter F. (Also the letter W, but I wasn’t writing about those words.)

Many of these F words are short: one-syllable. Words such as fair, fang, far, fast, fat, fiend, filch, fist, flay, flee, foe, folk, food, friend. Not only are the words short, they express important relationships or concepts.

Not only that: these words have been in our language for more than a thousand years. They resonate with us. They reach deeply into our being. As Mr. Nachman explains to Cole in The F Words, our reaction to these words is often visceral, whereas our reaction to words from, say, Latin or French, is usually cerebral. Intellectual rather than physical.

In addition, the letter F is a fricative, which means it’s a consonant formed by the friction of breath passing through a narrow opening. Say any F word and listen to what’s happening as the breath passes through narrowed lips and teeth. It’s almost as if the F sound rouses one to action. Perhaps prepares us to fight.

The novel’s title came to me from the beginning. I envisioned the first scene (Cole Renner spray-painting his high school wall with the F word, 15 times) before I even wrote it, and I envisioned a story in which Cole would learn about the best ways of fighting against oppression and also about relationships and concepts that start with the letter F.

I think the title signifies that there are many indispensable words that start with F, and what we call “the f word” is not the most important of them.

Q: What do you think the book says about activism in today's world, and what do you hope readers take away from the story?

A: I think the book says that activism is more necessary than ever. I realize that fighters for political change have been saying this for at least one hundred years.

But now Earth itself is protesting — continent-wide unstoppable fires in Australia and Superstorm Sandy, which destroyed structures as well as the land and killed people in eight different countries. Global warming is increasing at such a pace that soon some highly populated parts of Earth will be too hot for humans to inhabit.

The working class (teens such as Cole, Felipe, Treva, Emerald, and their friends) is hardest hit by these disasters, with no cushion to fall back on, and nowhere to turn for help.

And Black Americans, both working class and middle class, continue to die at the hands of militarized police forces. It is absolutely true that the future awaiting working-class kids is McJobs or the military. By any standard, and especially by an economic standard, the lives of the working class get worse and worse. Thus activism.

A: I’ve just finished an adult novel about a young woman who must find a job or lose her home. Contemporary realism . . . with a touch of science fiction. It’s the first time I’ve had an element of science fiction in my writing, and I’m excited about the story.

Now that’s done, I’m working on a middle grades story about a horse race, told in ballad form. I’ve never written in the ballad form before: it’s proving difficult for me. I probably would have been a dreadful troubadour.

A: I would like readers to know that The F Words is, in its own way, a revolutionary contribution to YA literature, just as the use of position was a revolutionary development in the English language.

There are many wonderful YA novels about resistance. My favorite is The Hate U Give, by Angie Thomas. But each of these books looks at a particular oppressed group in society: Black Americans, Latino-Latina Americans, Arab-Americans. They do not look at these groups as part of a larger group: the working class.

The F Words, paying respect to BLM and immigrant rights groups and women’s struggles, shows that all of these issues are connected.

That is not only revolutionary, it is unusual in that most media appears unconcerned with the working class or its conditions or needs. The F Words is, I believe, a voice for diversity, for social justice, and for working-class teens.

And for poetry — especially poetry as a means of both feeling and comprehending the world around us, and urging change.