Mike Mattison and Ernest Suarez are the authors of the new book Poetic Song Verse: Blues-Based Popular Music and Poetry. Mattison is a singer, songwriter, and founding member of Scrapomatic and the Tedeschi Trucks Band. Suarez is the David M. O'Connell Professor of English at the Catholic Universitiy of America in Washington, D.C.

Q: What inspired you to write Poetic Song Verse, and how would you define the concept of “poetic song verse”?

A: Our love of songs with poignant lyrics inspired us to write the book. Bob Dylan’s 2016 Nobel Prize in literature affirmed what we already knew—that song verse can be a form of literature.

We engage in an extended discussion of the roots of the relationship between blues-based music and poetry. By examining the confluence of blues and poetry, and by considering the creative practices of various seminal artists and the cultural conditions and landscapes in which they worked, we identify a relatively specific subgenre of song that’s also a form of literature.

We use “poetic” to describe lyrics that have literary intent and that consciously strive for aesthetic impact.

We don’t mean “literary” in the clichéd sense of high-minded, or heaven forbid, willfully opaque, but to denote linguistically rich compositions that operate on many levels simultaneously, incorporating image, metaphor, narrative, linguistic nuance, and play in ways that often deliberately correlate to broader cultural conversations.

Lyrics that seek to transcend the grasp-and-release mechanism of pure entertainment. Lyrics that prick our curiosity and invite repeated visits and renewed scrutiny (which, in itself, is a fine step toward a definition of “literary”).

Are some lyrics more consummately literary than others? Yes, of course. And the author’s intent is one of the main drivers of their success.

What we call poetic song verse isn’t poetry set to music, like the Beats’ poetry with jazz accompaniment, but it sometimes takes a hybrid form in recordings like Gil Scott-Heron’s or Leonard Cohen’s.

The distinction we draw, while acknowledging room for ambiguity and debate, rests on the symbiotic relationship that most often occurs when potent lyrics and sonics are developed together.

By “sonics” we mean every aural dimension of song, including voice, instrumentation, arrangement, and production. Simply put, how a song is sung, performed instrumentally, arranged, and recorded affects how the lyrics are experienced emotionally and intellectually. Hence, different arrangements, productions, and performances of the same lyrics are experienced differently.

In poetic song verse sonics combine with verbal techniques often associated with poetry—imagery, line breaks, wordplay, point of view, character, story, tone, and other qualities—to create a semantically and emotionally textured dynamic, resulting in songs that, in T. R. Hummer’s formulation, “tap into the fundamental power of the subterranean unity of music and language, of tone and word.”

Q: What impact did the artists of the late 1950s and 1960s have on musical tastes and traditions?

A: In the late ‘50s and the ‘60s Beat coffee houses, bookstores, and nightclubs sprang up across the United States and spread to Western Europe.

After putting rock ’n’ roll of their youth aside for a handful of years, many ‘60s songwriters returned to the rebellious rhythms of ‘50s rock ’n’ roll and wedded it with verse inspired by contemporary poetry.

In the mid-‘60s Dylan’s rock ’n’ roll–Beat poet persona strengthened his already active sense of the possibilities between poetry and music and led to Bringing It All Back Home (1965), Highway 61 Revisited (1965), and Blonde on Blonde (1966), albums that ignited an explosion of poetic song verse. 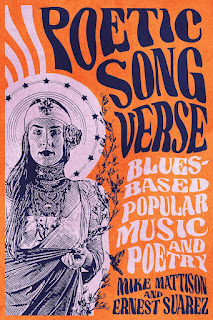 Instead of portraying themselves as the descendants of Woody Guthrie, Bukka White, and Pete Seeger, artists returned to the theatrics of Chuck Berry, Little Richard, and Jerry Lee Lewis but retained the cerebral, self-consciously artistic emphasis that characterized songs and poetry in Beat coffeehouses.

This combination released Dylan and others from songwriting conventions that ranged from the length of individual songs to how albums were conceptualized, recorded, and produced.

In essence, the Rolling Stones, the Beatles, the Doors, the Who, Jimi Hendrix, the Kinks, and others followed Dylan’s lead and expanded ‘50s rock ’n’ rollers’ sounds and emphasis on performance, assuming often extravagant yet artistically resonant personae that resulted in songs and albums replete with ambitious wordplay and sonic arrangements.

A: We’ve both been listening to most of the music we address for most of our lives. We read everything we could find related to our topic, but we didn’t want the book to be conventionally academic. We wanted it to be sophisticated, but readable and lively.

In our book, we draw on biographies, histories, popular magazines, personal reminiscences, and a selective smattering of academic studies to detail how a range of artists ushered in new forms of verse composition.

We also know many musicians and poets, as well as a healthy handful of people who work with both forms. We’re both active writers, and Mike has been a professional songwriter and musician for three decades.

What surprised us most was the depth of many songwriters’ engagement with poetry in specific and literature in general. This phenomenon started to become widespread during the 1960s, but extends to the present.

Part of our case for poetic song verse as a genre is the emergence of rock as pastiche, the combining of disparate materials, forms and genres, often without regard to their individual rules of usage.

Green Day, Titus Andronicus, the Mountain Goats, the Avett Brothers, Anaïs Mitchell, Janelle Monáe, the Drive-by Truckers, the North Mississippi Allstars, and other relatively recent well-known acts have made lyrically ambitious albums in the 21st century, but several of the most successful recent ventures into poetic song verse have come from lesser-known bands, like AmeriCamera (it’s worth recalling the blues’ humble origins and that literary modernism sprang from a small coterie of young artists publishing in little magazines in the 1920s).

Q: Which other recent artists do you see carrying on this tradition?

A: We edit a feature, “Hot Rocks: Songs and Verse,” for Literary Matters, a journal of literature and art, and we’ll keep thinking and writing about music’s relationship to other art forms, especially literature.

Our new book project, tentatively titled Ralph Ellison, Robert Penn Warren, and the American Century, is just getting off the ground. It’s about American culture during the middle of the 20th century.

Ellison was Black and Warren was white, and they were raised in segregated societies, but came to become close friends and to see themselves as engaged in similar struggles and artistic enterprises. We want to tell their stories, and to examine how their stories help us understand what our society is experiencing today.

A: We wrote the book we wanted to write. Poetic Song Verse: Blues-Based Popular Music and Poetry was a labor of love. We wanted to make it readable without yielding any ground intellectually.

Our goal was to balance historical details and analysis of particular songs with accessibility, and to create a lively, intelligent, and cohesive narrative that provides readers with an overarching perspective on the development of an exciting, relatively new literary genre: poetic song verse.