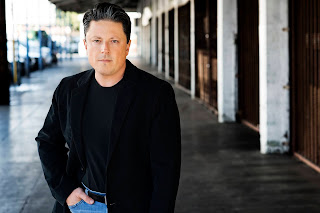 Rudy Ruiz is the author of the novel The Resurrection of Fulgencio Ramirez. His other books include the story collection 7 for the Revolution, and his work has appeared in a variety of publications, including Ninth Letter and Gulf Coast. He lives in San Antonio.

Q: What inspired you to write The Resurrection of Fulgencio Ramirez, and how did you create your characters Fulgencio and Carolina?

A: The day my wife, Heather, and I brought our firstborn daughter, Paloma, home from the hospital, I was struck by an epiphany as I carried her up the stairs.

I had known I wanted to write novels since I was a kid, but I’d been waiting for the right combination of life experience and inspiration to strike. That moment it happened.

And I realized I needed to tell my father’s life story, but not in a purely realistic way, rather in a way that was magical and explored the full potential of what his life could have been like if only the world was a better place, if second chances were possible, and if the character based on him had made a few crucial different decisions.

The character of Fulgencio is based on my father, Rodolfo Ruiz Cisneros, who was the son of Mexican immigrants, grew up poor on the U.S.-Mexico border, worked his way through a private high school and was the first in his family to attend college.

He was a larger-than-life dreamer and an incredibly hard worker. And he never gave up.

Many of the stories in the novel, as well as Fulgencio’s relationship with Carolina Mendelssohn, are based on tales my father told me about his upbringing in the 1950s as well as his first love and loss.

The love and relationship between Fulgencio and Carolina is also inspired by my own love story with my wife. We’ve been together 27 years already and are more in love than ever.

So, I like to believe that love’s power to heal and reach beyond the barriers of time, life, and death -- as it does in the novel -- is quite real.

Q: In a review of the book in the New York Journal of Books, Caitlin Hicks writes, “Although many characters die, they don’t all stay dead. Ruiz creates a surreal world with death and not-death that allows all the friends Fulgencio meets in his adventures to live beyond their demise—and cross back over the line just to hold court with him.” What do you think of that description? 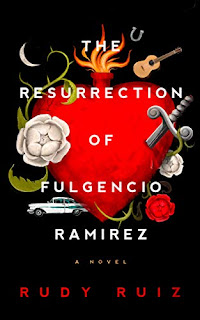 A: I appreciate the reviewer’s words: “Ruiz creates a surreal world with death and not-death…” I feel that this assessment very much captures what I was striving for in writing a novel in the magical realism style.

That, indeed, was my aspiration –– for in my personal and cultural experience, even when our closest loved ones cross the border to The Other Side, their spirits, their teachings, their love remain with us.

Having been born and raised on the border, crossing such lines on a daily basis was a routine. For me that border is a metaphor, not just for the ability of the human spirit to transcend physical borders but also psychological, emotional, and spiritual ones.

A: I definitely did not know how The Resurrection of Fulgencio Ramirez was going to end when I began writing it.

For me, the most exciting part of writing is letting the story and the characters take me along for the ride. I am a conduit. I am a storyteller. And, I’m just as much a reader as I am a writer.

So I like to defer to my characters and to inspiration through the writing process in order to create something that feels natural and spontaneous and fun.

A: I hope that when readers experience The Resurrection of Fulgencio Ramirez, they can walk away with hope in human nature, faith in the power of love, and a renewed appreciation for how diverse cultures can come together to create beauty, harmony, and peace, not just horror, conflict, and suffering.

A: I am busy on my next novel, Valley of Shadows, due out from Blackstone Publishing in September 2022.

The novel is a magical realism, neo-Western horror story set in 1890s West Texas. It follows a former Mexican lawman whose town becomes stranded north of the U.S.-Mexico border when the Rio Grande shifts course. Forced into retirement, he’s beckoned back when a series of macabre murders and abductions begins to take place.

I’m very excited about it because it is mysterious and moving yet also explores – within a historical fiction context – issues of racism and social justice that are very relevant today.

A: I’d like to sincerely thank you for the opportunity to share my writing and inspiration with your readers.

I’ve always felt like an unofficial ambassador for the border. People hear about the border on TV or read about it in the media, and if they’ve never been there, they might assume it’s a terrible place.

In reality, it is a beautiful world where English and Spanish blend musically, sabal palms soar into clear blue skies, and the Rio Grande empties into the Gulf of Mexico flanked by wide, sandy beaches. And you know what? The sand looks the same on both sides of the river’s mouth.

My ancestors have lived there for centuries. I hope someday the border can be a place of unity rather than division, a place where people learn to come together rather than be torn apart.

If that sounds good to anyone reading, I hope they keep enjoying my work, visit me at rudyruiz.com, and follow me on Twitter @Rudy_Ruiz_7