Clarissa Harwood is the author of the new historical novel The Curse of Morton Abbey. Her other novels include Impossible Saints. She teaches university literary and writing courses, and she lives in Ontario, Canada.

Q: In The Curse of Morton Abbey’s author's note, you write that the book’s inspiration came from your wondering what the characters of Frances Hodgson Burnett's classic A Secret Garden would be like as adults. How did you create your protagonists?

A: I never set out to create a character: my characters pop into my head like intruders, demanding that I tell their stories!

I know this sounds dramatic or even disingenuous, and even though I know I am technically the creator of my characters, I experience them as real people.

This is not to say I know them from the beginning: they are more like strangers at a party who ask me to tell their story, and they are not always easy to get to know.

It was immensely helpful to think of my protagonists in The Curse of Morton Abbey as adult versions of the characters in The Secret Garden, but that was just a hint at the beginning of the process: they became their own individual selves as the novel developed. With every draft, I get to know my characters at a deeper level.

Q: Why did you decide that your character Vaughan would be a lawyer?

A: I needed a reason for her to go to Morton Abbey that didn’t involve childcare. She isn’t good with children, so she couldn’t be a governess like Jane Eyre or the unnamed protagonist of Henry James’s The Turn of the Screw.

I knew Vaughan was a very logical, organized person with a good memory, so legal work seemed like a natural fit for her personality, and her “conveyancing” (legal work relating to property law) in particular gives her a compelling reason to go to this remote place where she knows nobody because she’s desperate for work.

It also puts her in a juicy position of conflict with the people at Morton Abbey who don’t want the estate sold. 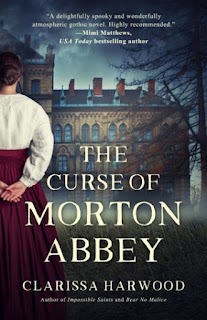 Q: In our previous interview, you said, “What I love most about writing historical fiction is the way research and imagination trigger and feed off each other in an endless cycle.” Was that the case with this book as well?

A: It was, but not quite in the same way as my other books. My first two novels, Impossible Saints and Bear No Malice, are grounded in the history and culture of Edwardian England, whereas The Curse of Morton Abbey owes its roots more to British literary history.

In other words, Morton Abbey is my homage to the Victorian novels I studied and taught for more than 20 years, and I was more interested in playing with those literary echoes than I was in grounding the book in historical realities.

I also think the best gothic novels have a timeless, dreamlike quality, partly because they involve an isolated setting. For me, the core story should be able to work in nearly any place and time.

A: I hope readers see in all my novels models of women’s strength, the ways in which women in history have found a place and a voice for themselves, and also that strong women don’t need to eschew romance in order to be feminist.

For The Curse of Morton Abbey in particular, I will share my favourite line from the novel that encapsulates another, more specifically gothic theme.

It comes from a conversation between two of the major characters in which they debate the value of reason/logic vs. passion/emotion: “Our passions can tell us a great deal about ourselves. Our most irrational moments will reveal the truth in a way that no amount of reasoning ever could.”

I think this message is embedded in every gothic novel to some extent: like dream symbols, gothic novels bring their protagonists face to face with their shadow sides.

Sometimes these shadow sides are represented as monsters or as human antagonists, but in both cases they represent “irrational” desires or fears that the protagonist has repressed.

A: I have several projects in various stages of completion, but I’ll mention just two.

One is a retelling of a Thomas Hardy novel set on the Canadian prairies in the 1920s. Another is about a woman mountaineer in the 1960s and is set in Switzerland. It’s exciting as well as scary to push myself outside my comfort zone of Victorian and Edwardian England!

A: The setting and era of The Curse of Morton Abbey, late-Victorian England, is my happy place.

My Ph.D. dissertation focussed on this place and time too, and my love of gothic novels is pretty clear in my academic work: Dracula is the focus of the first chapter I wrote in my dissertation!

The fiction I’ve taught as an English professor seeps into everything I write, especially the classics of Victorian literature such as Jane Eyre and The Secret Garden, which were especially influential for Morton Abbey.