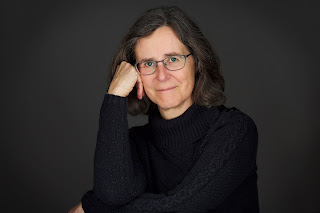 Kathy Stinson is the author of the new children's picture book The Girl Who Loved Giraffes and Became the World's FIrst Giraffologist. It focuses on the life of Anne Innis Dagg. Stinson's many other books include The Man with the Violin. She lives in Rockwood, Ontario.

Q: Why did you decide to write this book about Anne Innis Dagg?

A: While watching the documentary film The Woman Who Loves Giraffes, I was really taken with Anne's passion and determination to pursue her dream of studying giraffes in the wild, how she overcame gender-based discrimination in order to do so, and how she shifted her focus to fighting for women's rights when her dream of becoming a zoology professor was thwarted, because she was a woman.

Most kids share Anne's love of giraffes and have a strong sense of justice, so I knew Anne's story would be a good vehicle for encouraging them to pursue their dreams, and to fight for justice whenever they encounter unfairness.

Q: What do you think Francois Thisdale's illustrations add to the book?

A: François's illustrations do a fantastic job of capturing the magnificence of giraffes and of the African landscape.

François manages to treat giraffes with dignity and even manages to convey emotion, as on the page about giraffes becoming an endangered species, without abandoning the realism of his portraits and resorting to a cartoon-like rendering.

His illustrations support well the girl-power/feminist aspect of Anne's story too. 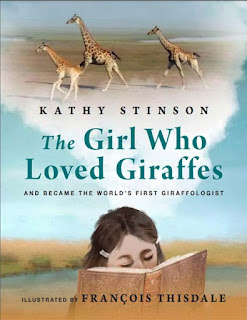 With his subtle layering in of details like maps and postage stamps, he gives readers lots to discover with subsequent readings of the book.

All of this, combined with the careful design work of Kong Njo, makes for what I think is a pretty enticing package for readers of a wide range of ages.

Q: The Kirkus Review of the book calls it "A reminder that many appreciate you even if those in charge do not." What do you think of that description?

A: It's always interesting to see what aspect of a story different readers will fasten onto.

That quote isn't perhaps what I would see as the main point of The Girl Who Loved Giraffes, but one of the things I appreciated in Anne's story is the fact that yes, she worked hard and achieved her goal of studying giraffes in Africa, but she also worked hard toward her goal of becoming a zoology professor, and it didn't matter, because life isn't always fair.

I think we don't often present that truth when we're wanting to inspire kids to pursue their dreams.

That said, I don't think that without the surprise of learning that giraffe workers all over the world had been reading her giraffe book for decades, it would have been possible for me to create an appealing biography of this woman's life.

But Anne's long wait to know her work was appreciated certainly stretches the concept of delayed gratification (that perhaps Kirkus was thinking of as a desirable selling point?) to its limits!

A: Research for the book consisted of many viewings of the film that first inspired me, meetings with Anne and a life-long friend of hers, listening to and watching shows that featured Anne, reading her books and other books about giraffes, as well as all I could find online about her and the animal she is still so passionate about, and visiting the archives at the University of Waterloo.

I knew from having learned during a visit to Krueger that if a lion chases a giraffe onto pavement, the giraffe will slip, making it easy for the lion to take the giraffe down, but I didn't know until working on this book that on natural, unpaved ground, a giraffe that feels threatened can kill a lion with one kick of its dinner-plate-sized hoof.

I was also surprised to hear how seriously the numbers of wild giraffes have been declining. We hear about elephants and other large animals, but giraffes seem to somehow, like Anne, slip under the radar of people's awareness.

Encouraged by the work being done to help save giraffes and the habitats that support them, I decided to donate a portion of my royalties to giraffe conservation.

A: I've been asked by a publisher (Greystone) to do a picture book biography of Maud Lewis, a Nova Scotia artist who, despite the challenges of disability, pain, and poverty, captured beauty and a sense of joy in her paintings.

I have several other picture book manuscripts in various stages of development on the go too, as well as an adult novel.

A: I love to start my day reading in bed with a cup of tea before getting down to writing, and after a day full of words, I like to clear my head walking in the woods and fields near my home -- and doing jigsaw puzzles.