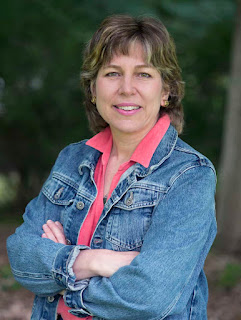 Suzanne Chazin is the author of the new mystery novel The Fragile Edge. It's the sixth in her Jimmy Vega series, which also includes Voice with No Echo. She lives in the New York City area.

Q: What inspired the plot of your new Jimmy Vega mystery?

A: We live in such a polarized country these days—I think we’ve lost sight of some of our reason and humanity. I wanted to create a plot that played with people’s assumptions about others.

I also wanted to tackle the civil suit aspect of the on-duty shooting that haunts Jimmy Vega’s past. An officer-involved shooting is like a pebble dropped in still water. The effects—legal and emotional—are life-changing.

I think too many cop thrillers either show the hero cop blasting away at “bad” guys or the corrupt cop gunning people down for personal reasons with impunity.

It is rare to see a series tackle the ramifications of a realistic shooting situation where the officer had to make a split-second decision about whether the item in the suspect’s hand was a gun or not.

Jimmy made a mistake (in book #3, No Witness But the Moon) and the ramifications continue here in book #6, The Fragile Edge, with him facing a civil suit and being passed over for promotion.

Q: The title of the book comes from a poem by César Vallejo. Why did you decide to choose this line?

A: The titles of all of the books in the Jimmy Vega series are taken from Latin American poems. When I began, I wanted to honor Latin American culture and the beautiful way it spoke about love, grief and partings.

I took this line from a poem called “Pilgrimage,” by Peruvian poet César Vallejo, an early 20th century poet. It describes waking through a graveyard, pondering the lives and fates of the dead. It reminds me of my favorite poem by Thomas Gray, “Elegy Written in a Country Churchyard.”

“The Fragile Edge” he speaks of is, to me, metaphorical. It is both the edge of an open grave awaiting a casket and also a reminder of how our lives are balanced between life and death on this “fragile edge” of existence. 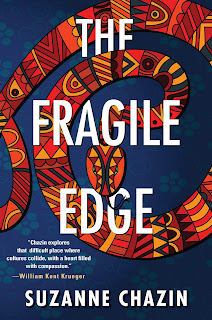 It made me think of how it must feel to be someone on temporary asylum status, like Elizabeth and her mother—always clinging to this “fragile edge” of hope of living permanently in the United States, without ever being sure it will happen.

Q: The writer William Kent Krueger said of the book, “Chazin explores that difficult place where cultures collide, with a heart filled with compassion.” What do you think of that description?

A: I adore William Kent Krueger’s books and am enormously honored that he chose to praise mine. He has such a way with words, so it’s not surprising that he would find a perfect summation for what I am trying to do.

I mean, of course, I'm trying to tell a ripping good whodunit, and I'm thrilled no end, when readers tell me time and time again that they didn’t guess the resolution and were on the edge of their seats the whole time.

But I am also gratified when they take away something deeper from the stories—a sense that they have explored the inner lives of characters they might not get to explore any other way than through fiction.

All good fiction takes you into lives you might not get to visit otherwise, but I’ve concentrated on doing this with characters who, in many cases, don’t speak English or speak very little of it, so it’s gratifying when I can bridge that cultural divide and connect readers to characters they might not get to converse with otherwise.

Q: Can you say more about what you hope readers take away from the book, and from the series in general?

A: A good book, to me, entertains, enlightens and inspires. It opens a window into another world.

I hope that readers finish each Jimmy Vega book feeling that they were totally caught up in the story, that they were both surprised and satisfied with the ending, and that, after closing the final pages, they continue to carry a little bit of love for the characters forward in their everyday lives.

We need more understanding in our world today. Fiction offers us a wonderful means of escape and I appreciate its power to do so. But when we re-enter our world, I prefer the sort of fiction that continues to resonate within us, guiding us to our best selves.

A: A lot of my readers have been begging me to do another thriller about the New York City Fire Department. I did three in the early 2000s about Georgia Skeehan, a rookie arson investigator.

I can’t go back to the same character because there wouldn’t be a big enough market with three books already out there so I am working on a new character right now for a new, but similar series.

A: I think this is a very tough time to be an author. Cancel culture has made it nearly impossible for writers to write outside of their own narrow lane of ethnicity, gender, and sexual orientation these days.

I personally think this is a mistake. Writing is about imagination and this current view puts deep constraints on authors and makes them skittish about attempting to imagine anything beyond their own worlds.

I totally celebrate the diversity of voices available to readers these days, but I think it’s a mistake to believe that empathy and understanding are solely derived from the circumstances of our births.