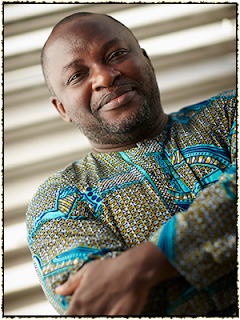 Uwem Akpan is the author of the new novel New York, My Village. He also has written the story collection Say You're One of Them, and his work has appeared in a variety of publications, including The New Yorker. He teaches creative writing at the University of Florida, Gainesville. Born in Nigeria, he lives in Gainesville.

Q: What inspired you to write New York, My Village, and how did you create your character Ekong?

A: Deborah, thanks for this interview. I wanted a character that could carry the burden of all the things I wanted to talk about—the Biafran War, tribalism in Nigeria, racism in America, especially racism in American publishing.

I wanted that character to be an Annang person, because we are a minority in Nigeria, and nobody knows about us…

I wanted the reader to begin by having a sense of what Western embassies feel like out there. The fear of the brutalities and insults and racism of the American embassy is the beginning of the immigrant’s trauma!

As I’ve said, I wanted the reader to feel the weight of our Nigerian ethnic diversity. I hope the maps in the book are helpful to that effect…out here in America, the few people who know about Nigeria only know of the Yorubas, the Igbos and the Hausas. What about the other 497 ethnic groups?

I also wanted to explore what it means to be haunted at home and abroad. These three huge ethnic groups can really oppress the minorities. And then when these minorities come out here, racism gives us a bloody nose as well.

I wanted to write, too, about Nigerian food as part of the celebration of ethnic dishes that is New York City. So, yes, I knew if I created a strong character, I could throw all these things at him.

Q: The Kirkus Review of the book says, in part, “America and Nigeria serve as mirrors for each other here: Both are places of incredible diversity (Nigeria has at least 250 ethnic groups), yet both are marred by the fact that old conflicts continue to circumscribe nearly every interracial (or intertribal) interaction.” What do you think of that description? 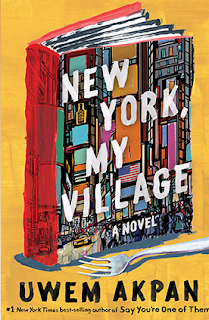 A: It’s funny how some Americans can think of Africa as a violent place, without pausing to think of the history of America itself. So, in juxtaposing the Nigerian and American histories of violence, I wanted to give people a chance to experience these things.

For example, in knowing how many Native Americans were killed to make America, we may be less judgmental of others.  Perhaps, we may even accept that we’re like others or others are like us.

A: I chose the title because I was looking for a way to say these New Yorkers that Ekong meets are not too different from his people back home.

Of course, when you arrive in a new place, it feels all so different and alien. The architecture, food, climate, etc., are different. A big city like New York may feel impersonal and distant, but do the inhabitants not want happiness and peace and freedom and acceptance like, say, the people of Ikot Ituno-Ekanem?

Q: What do you think the novel says about the publishing industry?

A: Deborah, I believe the novel is begging, cajoling, satirizing the publishing industry to stop being racist. To open up.

And, you know, my students usually ask a lot of questions about agents and editors. They want to know what the industry is like. It’s very insular. This was a chance to explore this industry and bring it closer to the uninitiated.

What do we have to do to make this powerful industry open up to diversity? It is too white. I know George Floyd has helped the industry look itself in the mirror.

The good thing is, researching the novel, I was surprised at the number of white people inside this industry who were also pining for change. This is a good thing. I felt we had allies. We need these alliances to, at least, protect the little gains minorities are making.

A: My lips are sealed. It puts pressure on me.

A: Blessings to you Deborah…and congrats on your own books!