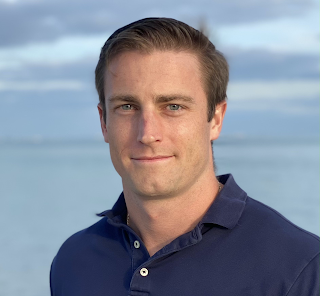 Thomas Bardenwerper is the author of the new novel Mona Passage, which takes place in Puerto Rico and Cuba. He served in the U.S. Coast Guard and is a student at Harvard Law School and the Kennedy School of Government.

Q: As someone who served in the Coast Guard and spent two years living in San Juan, Puerto Rico, did you need to do additional research to write this novel, or did you base much of it on your own experiences and knowledge?

A: Your sense is correct, Deborah, that this story is largely based on my own experiences.

Like the character Pat McAllister, I served as an Executive Officer aboard a Coast Guard cutter homeported in San Juan and participated in the law enforcement and humanitarian missions that are portrayed in the novel.

What you may be surprised to hear, though, is that my depictions of Cuba were partly based on trips I made to the island in 2006 and 2011. Indeed, I spent about four weeks staying with different Cuban families in places like Havana, Santiago de Cuba, and Ciego de Ávila (the hometown of the characters Galán and Gabriela Betances).

On a side note, if it hadn't been for that first trip I made to Cuba as a 16-year-old, I likely would not have discovered my interest in Latin America, joined the Coast Guard, or written Mona Passage!

But yes, once it became apparent that Mona Passage would actually be getting published, I realized that I needed to do some real research.

For example, while I was familiar with how Cubans sailed aboard yolas from the Dominican Republic to Mona Island, I was unfamiliar with how they completed the first leg of that journey (from Cuba to DR).

Also, I knew very little about the Cuban mental health care system, a subject that becomes quite relevant to the story's plot.

Q: How did you create your characters Galán, Gabriela, and Pat, and how would you describe the dynamic between Galán and Pat?

A: Pat started off as an autobiographical character, and Galán started off as being loosely based on a friend of mine. I say “started off” because as I wrote the initial draft, these two characters took on identities of their own. Eventually, I could insert them into scenes and know exactly how they would respond.

Gabriela is loosely based off of a woman who worked at one of the military bases to which I was assigned. Because of her developmental challenges, she had a certain child-like innocence that I tried to portray in Gabriela. But like Galán and Pat, Gabriela also developed her own identity the more I wrote. 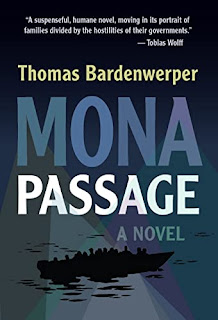 Galán and Pat have an older brother/younger brother dynamic. Since they are both outsiders in San Juan - Galán is Cuban and Pat is American - they quickly turn to each other for the friendship that they are unable to find elsewhere. It is this friendship, this brotherhood, that propels the story.

Q: Did you know how the novel would end before you started writing the book, or did you make many changes along the way?

A: The first chapters I wrote were snapshots from the lives of these two unlikely friends, Galán and Pat. I didn't know exactly how the novel would end, but I figured there would be some sort of moral dilemma.

Initially I thought this might involve Pat getting caught up in drug smuggling, but that seemed too far-fetched and emotionally uninteresting.

Once I came up with the character of Gabriela, however, the story had to be about migration. At that point, the writing process was such that I felt like I was transcribing scenes from a movie that was playing in my head.

A: I will leave this up to the readers! Indeed, as some of the early reviews have come in, it has been interesting to see how people react differently to various characters and aspects of the story.

A: By day I'm a law student, so unfortunately I have to spend most of my time hitting the books (the legal kinds, not the fun kinds!).

On top of that, my wife and I have had our hands full in a good way with our 11-month-old daughter. Once I graduate this spring, we will be moving to Miami where I will be working as a judicial law clerk.

Regarding Mona Passage, I'm hoping to begin shopping the book to filmmakers. The manuscript reads like a screenplay, the story is timely and gripping, and the Caribbean setting is perfect for the silver screen.

So what about writing? Well, I'm a big believer that you can't force anything in the world of fiction. In other words, if you're writing because you want to get famous or earn a living outside of a 9-5, it's probably not going to work out.

However, if a story comes to you that you feel like you absolutely need to tell, that it's hurting you to keep it inside, then you might have a chance. That's how I felt about Mona Passage, and as soon as another story comes to me with that same intensity, I'll start writing again. You have my word!

A: Mona Passage is being published through the Veterans Writing Award hosted by Syracuse University Press. This is a biennial contest open to military members, veterans, and their immediate family members.

I would encourage anybody who fits into those categories to submit their work, and I would like to once again publicly thank Syracuse for coming up with this idea and for giving veterans - a group that does not have the pedigree traditionally sought by agents and publishers - the opportunity to tell our stories.

I also want to thank you, Deborah, for your interest in Mona Passage! I hope you enjoyed it!