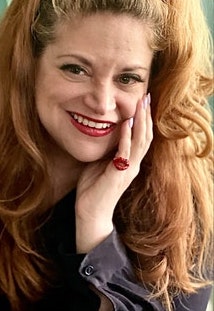 Ilise S. Carter is the author of the new book The Red Menace: How Lipstick Changed the Face of American History. Her work has appeared in a variety of publications, including Allure and The New York Times. She also is a sideshow performer and emcee, and she's based in New York City.

Q: What inspired you to write The Red Menace, and how was the book's title chosen?

A: I first proposed it as a short subject for a series of books called Object Lessons, but the more I researched it the more I realized it was a really interesting way of looking at American history, gender, and consumer culture.

Also, there just wasn’t a lot of mass market research out there on the history and technology of beauty. There are a couple really good ones (Lindsay Woodhead’s War Paint and Kathy Peiss’ Hope in a Jar) come to mind) but overall, a lot of the books on lipstick repeat the same myths and don’t really go deeper, so my curiosity was piqued.

The name itself is a play on America’s ongoing fear of socialism (which crops up again and again – even in beauty!) and of women’s power and the red lip.

Q: As you note, Martha Washington was a fan of lip color--how common was its use in the early United States?

A: It’s hard to say with any accuracy, since lip color and care was a DIY affair more than a commercial product, and no one kept marketing data, but it was probably fairly common, since a good number of housekeeping books offered up recipes for salves that could be tinted.

There was rouge and rouge-in-powder available commercially, but it was an expensive and impractical item for most women (remember most Americans lived and worked on farms or in a manual trade in those days), so those preparations were probably more of a luxury item for women who had the time and money for cosmetics.

Additionally, in the early 1800s, America was really trying to establish itself as its own power and was moving away from the unisex powdered wigs and rouge that had marked European aristocracy of the late 1700s. 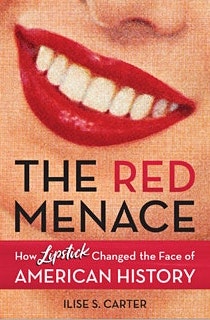 Q: You describe the “legend” involving Elizabeth Arden “handing out red lipstick to suffragettes as they marched down Manhattan's Fifth Avenue demanding the vote” in 1912. How much truth did you find in that story?

A: With all due respect to Arden as a pioneering businesswoman, I don’t think there’s much truth to it. I think it’s the “Newton’s apple” of beauty. It sounds right, it appeals to our collective notions, it’s great PR, but I couldn’t find any contemporary reference to it in the press or her archival materials.

It also just doesn’t fit in with the way the suffragists operated, that socialites would conduct themselves, or how lipstick was applied and packaged at the time.

Q: The Publishers Weekly review of the book says, “Carter also delves into racial and gender discrimination within the makeup industry, noting that until recently, the color range of lipsticks, as well as foundations and blush, were geared toward a 'porcelain' complexion.” What were some of the changes in the lipstick industry over the years?

A: In terms of racial equality, the industry has become better (although not perfect) in just recognizing that fact people of color are consumers and entrepreneurs, too, and that beauty means more than just the blonde-haired, blue-eye Miss America type. You see more representation in advertising and ownership of beauty companies.

There have always been beauty companies that catered to black women but even they have a problematic past, since they felt forced to adhere to a white supremacist standard of beauty and offered things light skin lighteners.

The “Black is Beautiful” movement of the ‘60s was a real game changer in terms of people of color demanding to see themselves reflected in products and ownership, but it’s been a constant back and forth and it’s still a struggle for POC to get the capital needed to start businesses and in to behind-the-scenes positions on boards and in development. It’s improving, but there’s a way to go.

A: I’m starting to dig in on my next book, which is currently titled “Selling Rebellion” and it’s about how a few generations of subculture have seen their subversion mainstreamed and sold back to them.

For Gen X people like me, it’s seeing the Clash and Iggy Pop’s music used in commercials; for Boomers, it may be all the Beatles merchandise. Some generations seem okay with it, some are really cynical. Either way, I think it’s going to be an interesting way to look at pop culture and mass media.

A: While beauty tends to be highly gendered, I really didn’t want this to be a book that was aimed only at people who identify as women. It’s a chunk of American history that’s worth looking into in the same way that we’d study the industries of Hollywood or Detroit.

Of course, I think women will see themselves in it, but it goes further than that and I’m interested in seeing what people who don’t wear makeup react to in it.