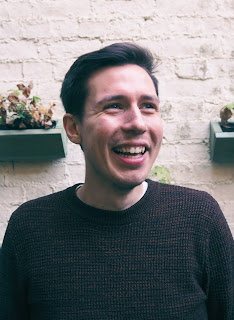 Rob Jones is the author and illustrator of the new children's board book Where's Brian's Bottom?. He is based in the UK.

Q: What inspired you to create Where's Brian's Bottom?

A: I’ve always loved dogs, especially sausage dogs. I’m hoping that one day I might own one (I’d probably call it Brian!). I draw dogs all the time and often try to come up with stories about them.

Q: How did you come up with the idea for the concertina-shaped book?

A: The book was actually inspired by a post I did on Instagram. I was between projects and had seen a few people doing these seamless photo sets where you can swipe across panoramic photos. I decided to draw a long animal with a surprise at the end for fun.

Cutting a long story short, my literary agent saw that post and said to try turning it into a book. He’s a fantastic agent and I owe an awful lot to him. 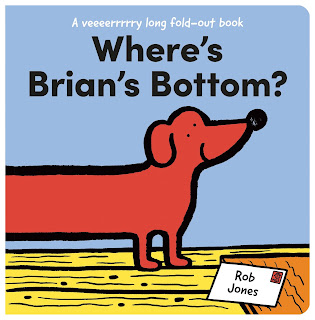 Q: How did you first get involved in creating children's books?

A: I started making children’s books while I was studying illustration at University. I use the term “making” because I used to print and bind them myself.

After leaving University, I would send these homemade books to publishers and sell them to small shops in the hope of being noticed. Ten years later, I finally feel like all the hard work is starting to pay off!

A: I’d like to think that the majority of kids that read this book will come away thinking, “Wow, that’s the longest book I’ve ever read!”

I know a dog who’s lost his bottom is a silly idea, but most of my ideas are on a similar level. I would find it hard to make a deep and meaningful book.

I’d also like to think that the kids (and their parents) will have a lot of fun reading this book. In case you didn’t know, once unfolded, it’s almost 7 feet long.

A: I’ve just finished the next book for this series. I’m not sure how much I can say about it but I’m really proud of it. It’s going to be a great series of books. I’ve now got to start thinking about book number three!

A: Because this book is a concertina, it actually has two sides. On the frontside, there is the main story which is set in the morning. On the backside, it’s the night before, so I’ve added some little jokes for the readers to spot.

My son was born just after the book came out in the UK. Now he’s 10 months old, he loves it! He’s always pulling the book off the shelf and opening it up. It’s both an amazing and surreal feeling to see your baby enjoying a book when he has no idea who made it!