Elizabeth Weiss is the author of the new novel The Sisters Sweet. She lives in Minneapolis.

Q: What inspired you to write The Sisters Sweet, and how did you create the Szasz family?

A: Along with everyone else in the office where I worked at the time, I spent an afternoon in 2009 riveted by the Balloon Boy story, this bizarre episode in which people feared that a 6-year-old boy had been carried off in a large, homemade balloon that had become untethered from his family's backyard.

After a massive rescue operation, the boy emerged from the attic, where he had been hiding. During an interview on CNN, he appeared to admit that his father had instructed him not to come when he heard the people calling his name.

The authorities concluded it had all been a publicity stunt. (The parents were convicted of crimes as a result, but I should note that after initial confessions they've maintained their innocence, and they were actually recently pardoned.)

This story unsettled me. I couldn't stop thinking about parents who would use their child in this way—involve them in a fraud in pursuit of fame.

I fiddled with that idea for a long time, first trying to write something with a more contemporary setting, but the story ended up drifting to the world of vaudeville, where it seemed likelier that someone could get away with a serious long-term deception.

The sisters came to me first, and the parents' stories emerged later, in response to my own curiosity about when and how things might have gone wrong for this family.

A: Years ago I read an interview with A.S. Byatt in which she said that she tried not to read fiction from the period she was researching for her own work, because she wanted to avoid another writer's “imaginative reconstruction” of that time. I took that to heart, and tried to stick to histories and primary documents.

It's so easy to access newspaper archives now—I spent hours getting lost in old issues of the Chicago Tribune, which gave me a wonderful sense of my characters’ day-to-day surroundings. If I got stuck on a scene, sometimes I'd figure out the date on which it might be taking place and check the weather report, and that would be enough to spark my imagination. 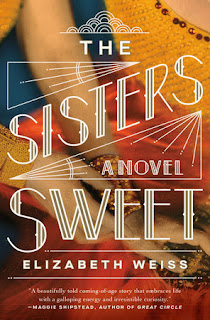 A collection of sermons by an early radio preacher helped me find the voice of the character Eugene Creggs.

The choreographer Ned Wayburn, who makes a brief appearance in the book, published a guide for aspiring dancers called The Art of Stage Dancing, which supplied many magnificent details about everything from stage makeup to rehearsal clothes to the audition process.

Writing a novel is also a wonderful excuse to email an expert a question, and I had delightful exchanges with the owner of a piano store about the mechanics of pushing a piano up a city street and with a librarian at the National Postal Museum about the timing of mail service in the 1930s.

Some of the best surprises in my research came from the book The Gold Coast and the Slum, a study of the Near North Side of Chicago conducted by University of Chicago sociologists in 1929.

It's an amazing record of the lives of ordinary people living in this sliver of the city, a few square miles that at the time contained an astonishing mix of neighborhoods: one of the city's wealthiest enclaves; the Bohemian district; blocks of rooming houses where single men and women who worked in the Loop could find affordable rent; the "slum," which was occupied primarily by poor immigrants.

I had spent time in the area, but I had no notion of this history, which this book makes extraordinarily vivid. We get all of these amazing details, in the neighborhood residents’ own voices: how people’s apartments were decorated, who was sleeping with whom, what people ate and drank, what the vibe was at a particular cafe. A gem on every page.

Q: How would you describe the relationship between Harriet and Josie?

A: I think Harriet and Josie love each other; they have the deep and remarkable bond of twins. But the intimacy between them is intensified to an unhealthy degree by their strange childhood, and neither of them is well-served by the family situation into which they were born.

Josie understands this long before Harriet is capable of understanding it, which means Josie’s choice to leave breaks Harriet’s heart. But it also creates the opportunity for Harriet to build something more for herself.

Q: The Publishers Weekly review of the book says, "Weiss explores the intriguing theme of a woman understood only in relation to others..." What do you think of that description?

A: I think it's exactly right—Harriet's journey is about moving away from seeing herself in that way, discovering her own dreams and desires and the will to fight for them.

A: I am bouncing between two novel ideas that I’m too superstitious to describe in any detail. We’ll see which one sticks.

A: I’m excited to connect with readers! They can find me on Instagram @lizjweiss.