Q&A with Mahyar A. Amouzegar 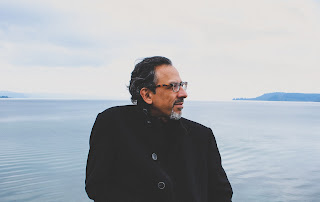 Mahyar A. Amouzegar is the author of the new story collection The Hubris of an Empty Hand. His other books include the novel Dinner at 10:32. He grew up in Iran and moved to the United States as a teenager. He lives in New Orleans.

Q: What inspired you to write The Hubris of an Empty Hand, and over how long a period did you write the stories?

A: I started on “Tell Me More” about 15 years ago, along with another dystopian story. This was right after Abu Ghraib’s prisoner abuse in Iraq, and I was thinking about closed societies and open societies, meaning the ones that allow free access to information, leading to the power of knowledge and the good and the bad we can do with it.

I wrote several pages of each but felt it was like writing a political science or sociology paper rather than a novel. I feel constrained when I plan a story as I am more character-driven, and until those characters come to life, there is no story to write. None of my stories are designed with an outline and an overall objective for the story arc.

So, I abandoned both until about two years ago, when the character of Jackie took shape. I generally spend about a year living with the characters before they even get real faces or bodies—they are like the generics in Jasper Fforde’s “Thursday Next” series, shapeless, faceless, and nameless.

Yet, they behave and speak and think like real human beings. And as they develop, they gain more of an identity and physicality. And that’s when the fun begins, as the characters come to life and the story organically flows as I write the first sentence.

Jackie had lots to say about her life, her mistakes, and her sense of right and wrong. As she grew from a shapeless entity to a fully defined human being, so did the story of “Tell Me More.”

I tend to write until my main characters, who become close friends, stop talking, and that’s when I stop too and hence “Tell Me More” became a short story, and I thought I was done with Jackie and the story.

But sometimes, the characters whom I had thought were done with me were not finished and would come back with more to say. And that’s why the last story of the book was needed to satisfy some of the characters from other books. 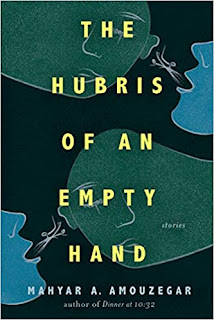 When I finished writing, Dalia and Jackie reappeared to demand more, which led to other characters being born and wanting their own story. At first, I thought these stories would be independent, a collection of people ruminating about their lives.

Every time I write a new story, I give myself a challenge: write in a different voice (Dinner at 10:32), imagine a world utterly foreign to my experience (A Dark Sunny Afternoon).

And with this last book, when I had finished half of the stories, I challenged myself to have a finished product where each chapter could be read independently, but if they are read together, it imagined a different arc.

So, if there was any conscious design, it was meeting my own creative challenges. I feel it worked but I am a biased judge.

A: The book’s working title was “Tell Me More,” but in the end, “The Hubris of an Empty Hand,” the title of the second story, made more sense for the entire book.

That chapter wasn’t just about Stock’s pride or ego but about the hubris of gods’ power hidden within humans’ “empty” hands. Similar to a Greek tragedy that addresses the defiance of the gods (or mortals). Thus, the title hints at the core of the stories where the key characters think (know) they can save others.

Moreover, and in general, hubris of humanity that thinks it can overcome everything even though we have very little at our disposal (hand) to effect change for good.

Q: What do you think the book says about storytelling?

I see storytelling as the transfer of imagination from two-dimensional words on the surface of a page to within a reader’s mind. There is something magical that can occur and reimagines what the author writes into what a reader feels. Each reader singularly sees the story and interprets it differently.

Some stories take you places as a “passenger,” but others lead the way but let you find your own “path.” I am hoping “The Hubris of an Empty Hand” falls under the latter category.

Q: As you mentioned, the same characters feature throughout the book—can you say more about the relationship among the stories?

A: Although, in retrospect, it was inevitable that these characters would come in and out of each story—because as most stories do, these short tales grew to be something different than first intended.

The characters all wanted (needed) to be connected. This group of friends, like any other tribe, needed each other and had the innate urge to protect each other. The gods, too, needed this connection to exist.

As I mentioned, many of the characters live with me even after the story is finished and hence, I was compelled to create a chapter that would bring the unsatiated characters from previous novels out to play.

I was tempted to write a chapter by Amani, but he had useful nothing to say, perhaps knowing full well anything he offered would be contrite and self-serving.

Both stories are set in the same fictional future world where human beings are faced with the challenges of a changing environment (infertility, reduced (lack of) sexual drive, wars, disease, etc.) and their response to it. However, the former is viewing it through a utopian lens and the second through a dystopian view.

A: I am fascinated by human strength and frailty and the complex ways we interact with each other. Yet, paradoxically, literary fiction can speak more truth than the real world, which is why I love reading a good novel and hopefully writing authentic stories.