Q&A with A. Natasha Joukovsky

A. Natasha Joukovsky is the author of the new novel The Portrait of a Mirror. She has worked in the art world and in management consulting, and she lives in Washington, D.C.

Q: Why did you decide to write a novel based on the myth of Narcissus?

A: I wanted to follow the "mythical method" T.S. Eliot so admired in Ulysses; to try to capture the present moment by way of the Western tradition in a way that would appeal to a contemporary audience.

Between the rise of selfies and social media and, later, Donald Trump, the story of Narcissus and Echo seemed the quintessential myth for our age. Its recursive quality in particular mirrors many of the circular, algorithmic forces underpinning contemporary life.

Q: In an essay for Electric Literature, you write, "My debut novel, The Portrait of a Mirror, is preoccupied with these warring desires, how we adhere to and transgress social norms, the illogical bizarrities of American etiquette, and the often fraught disconnect between manners and morals—especially in the “woke” one-percent." What do you think the novel says about social norms and how people relate to them?

A: In the words of Thorstein Veblen in The Theory of the Leisure Class: “Manner maketh man.” Social norms are signals—of class, of culture, of group belonging (or lack thereof). My characters are hyper-aware of the power of these signals, and know how to strategically adhere to or subvert them with great contextual sophistication. 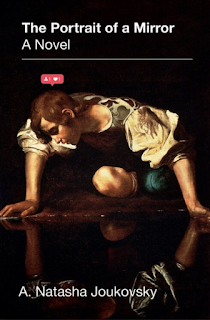 As I mention later in the article you cite, the novel is particularly interested in exposing the recent, increasingly well-documented social trend of conveying one’s privilege precisely by apologizing for it. Our social norms, too, are mired in recursive instability!

Q: How did you create your four protagonists, and how would you describe the dynamic among them?

A: Wes, Diana, Dale, and Vivien are all reflections of Narcissus and Echoes of one another—I’ve often imagined them like the business cards in that famous scene from American Psycho: indistinguishable for a distant third party, but highly differentiated to one another.

That said, The Portrait of a Mirror is inevitably a self-portrait too, and they’re all also reflections of me (hopefully the four worst versions).

My goal was to hold up a mirror and convict the reader, yes, but for the portrait to be so cleverly lit that they’d also forgive me—and their reflections.

A: I have a few new projects underway and am waiting for one to emerge as the frontrunner to fully commit. Leading candidates are an essay collection on delusions of grandeur (following the titular essay published in The Common) and a novel about probability and basketball.

A: I have a “quite useless” newsletter about art and culture on Substack (after Oscar Wilde’s assertion “All art is quite useless”). You can subscribe here.