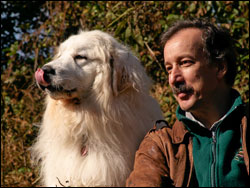 Edward Dolnick is the author of the new book The Seeds of Life: From Aristotle to da Vinci, from Sharks' Teeth to Frogs' Pants, the Long and Strange Quest to Discover Where Babies Come From. His other books include The Clockwork Universe and The Forger's Spell, and his work has appeared in a variety of publications, including The Boston Globe and The Atlantic. He lives in Virginia and New York City.

A: It is a curious one. I had written a previous book, The Clockwork Universe, about planets and stars and such. It dawned on me that people figured out those questions before they figured out life on earth. 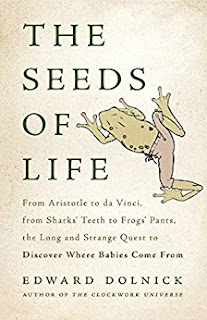 A: It was lots of research, and to my surprise, mostly unfamiliar territory, not just to me but to general readers. There was a lot in textbooks on embryology, but it had seldom been told as a story. The research was odd, esoteric, in bits and pieces. I was probably on some watch list for sex manuals from the 1600s!

Q: Of all the scientists whose work you examined, were there some whom you found particularly fascinating, either in terms of their discoveries or their methodology?

A: I did come to like some better than others. One favorite was Leeuwenhoek, the Dutch microscope man. He was so fascinated by everything. At the time, religion was terribly important, the notion that God created everything, so why would he create things that were difficult to see?

Now [Leeuwenhoek] does look, and is thrilled! He sees every drop of water, he’s making his wife open her mouth so he can look at her gums—nothing is beneath his notice.

Q: Were there any scientists you came to dislike? 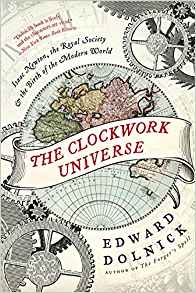 A: The peculiar thing was since the book was about men, women, sex, and babies, sexism--or presuming men were great and women were not up to much--was an important part of the story.

There were lots of men thumping themselves on the chest, not looking around at all. There were too many villains to name in that regard.

Q: Looking at the subtitle, what role do sharks’ teeth and frogs’ pants play?

A: Part of the reason for such a long subtitle is that I wanted to convey that [the book] would be fun to read. It attempts to be serious but won’t be homework to read.

With the sharks’ teeth, the scientists were into everything in the 1600s and 1700s, nearly any question you could ask. There was a fellow who found sharks’ teeth far from the ocean. He was a geologist. That mystery led him on a path to how all sorts of mysteries came to be. I was intrigued that the same fellow would find himself veering into biology. 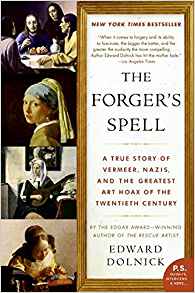 With the frogs’ pants, that [involves] one of my favorite characters, Spallanzani, at a time when they were trying to figure out how the sperm and the egg unite. The prevailing notion was that semen played a key role, but the role was mysterious—it somehow sparked the egg to life.

Spallanzani found a way to test that question. He wanted to see if you needed the sperm and the egg to touch. He would make full-body condoms for his frogs. He was sewing away at these boxers and trying to wrestle the frogs into them. Picture him—you’d have to make a lot of them. I loved the whole image of it.

A: Something completely different—the Rosetta Stone and the race to decipher it. It’s Ancient Egypt, one of the greatest deciphering contests ever. No one knew what was going on in Egypt, and then in 1800 someone found the Rosetta Stone, with hieroglyphs no one could read. [They thought,] If only we could break the code. It took 20 years. It’s great fun.

A: The key to it is to try to place yourself in the position of someone who didn’t know where life came from, or where babies came from, and [thought], Gee, that is a hard question. This was a basic question and a really hard question. That’s part of the fun of the book.

--Interview with Deborah Kalb. Here's a previous Q&A with Edward Dolnick.
Posted by Deborah Kalb at 7:23 AM