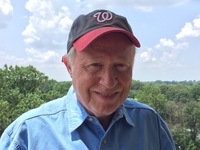 Sid Groeneman is the author of the book America's Sports Fans and their Teams: Who Roots for Whom and Why. A retired survey research professional, he lives in Bethesda, Maryland.

Q: How did you come up with the idea for your book, and have you always been a sports fan?

A: The book addresses questions that have always interested me— why different people like different sports, and how people decide which teams to root for.

I grew up in Toledo, Ohio, a medium-size city not large enough to support a major league franchise, but pretty close to Detroit and Cleveland, and also located in between Columbus and Ann Arbor.

So, from an early age, I was curious to know why some Toledoans supported Detroit teams and others favored Cleveland teams. Similarly for rooting for Ohio State University or the University of Michigan (my alma mater).

A: The book required two very different kinds of research: (1) the standard type of literature review to incorporate what others who have written about sports fans have said (or learned from data they’ve compiled); (2) a national survey of 1,303 fans and 522 non-fans that I designed and conducted to get much of the raw material for the book.

I also personally conducted 80 follow-up interviews by telephone with selected survey respondents to get more in-depth information and to be able to add “color” to the statistical findings from the survey. 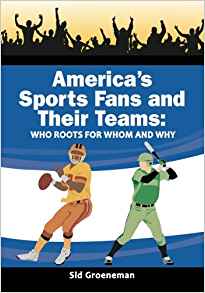 Two things come to mind which surprised me, Deborah. First is the diversity of reasons fans give for liking/following a particular team. Second are the differences between baseball fans and fans of the three other major professional team sports in the U.S.—football, basketball, and hockey.

For fans liking football, basketball, or hockey best, there is SOME of that type of answer expressed, but far less. Instead, they are much more likely to stress enjoying watching the action on the field, court, or ice.

Basketball fans often mention specific players they like. Hockey fans mention the roughness of the game more than other fans.

Q: Would you say most people are fans of the teams where they grew up, or are there other factors that are more likely to influence people?

A: Yes, “home team” or geographic proximity explains why most fans pick a favorite team to pull for— either the team they grew up with or the team they currently live closest to. But about one-quarter select a team that satisfies neither of those conditions.

I suggest in the book that this might be changing, as younger fans are more likely to choose a non-local team, which I speculate might be due to their having greater facility with electronic and computer technologies—which facilitates following non-local teams.

As for other or supplementary reasons expressed for liking/following a favorite team, there were many, including family and social reasons, liking a particular player/strategy/style, social pressures, sympathy for underdogs, the team’s values, or even to start a rivalry or competition with family member or friend.

Q: Did you notice any regional differences as far as sports fandom goes?

The latter finding puzzled me at first, but then it came to me that it must be due to the success and popularity of Venus and Serena Williams.

A: I just finished two hard years working on ASF and have no other topics I’m eager to explore. If I could get some funding, I would definitely consider preparing a second edition of ASF with fresh data from an updated survey.

Because the sports world changes rapidly, some parts of the book are already becoming a little dated (the lists of favorite teams), although the REASONS why people become fans, and like certain sports and teams best shouldn’t change much over time.

A: I’m glad you asked. America’s Sports Fans and Their Teams is available at Amazon.com—both in paperback and e-book versions. The paperback is also for sale at Politics & Prose bookstore on Connecticut Avenue in Washington, D.C.