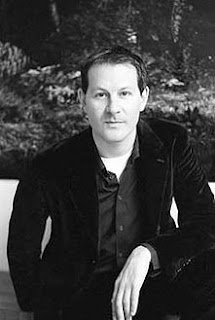 Andrew Wilson is the author of the new novel A Different Kind of Evil, the second in his series of mysteries featuring Agatha Christie as a detective. His other books include A Talent for Murder, the first in the series, and his work has appeared in a variety of publications, including The Guardian and The Washington Post.

Q: How did you come up with the idea for your second novel featuring Agatha Christie as a detective?

A: I wanted to write a sequel to A Talent for Murder, the first in a series of novels featuring Agatha Christie as my central character.

This book, A Different Kind of Evil, starts on an ocean liner, the SS Gelria, journeying between England and Buenos Aires, with stops en route.

The opening scene of the novel came to me in a flash. Agatha is on board the boat — a journey she made in real-life in January 1927 — when she she hears a scream and witnesses a young woman flinging herself from the railings to her death.

It seemed such a resonant image that I could immediately tell it was the beginning of what I hope is a gripping narrative. There are lots of twists and turns along the way. 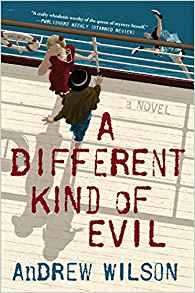 Q: Your novels are based on various episodes from Agatha Christie's real life--how did you blend reality and fiction this time around?

A: Each of the books is set in a location that Agatha visited at a specific time in her life. We know from the passenger manifest of the SS Gelria, that Agatha Christie set sail on 23 January 1927, bound for the Canary Islands.

She stayed in Tenerife, at the luxurious hotel Taoro in Puerto de la Cruz, with her daughter Rosalind and secretary Carlo for a number of weeks. I travelled out to Tenerife and while I was there my imagination started to work. What if Agatha had been sent to the island to investigate a murder?

The island is famous for its ancient Guanche civilisation, a civilisation that practised mummification. What if a partly mummified body had been found in a cave? And what if that body belonged to an agent of the British Secret Intelligence Service?

Agatha has to use her knowledge of the criminal mind to unearth a range of secrets and uncover a different kind of evil.

Q: How do you think your version of Agatha Christie has developed from the first book to this one?

A: In the first book Agatha is placed in the position of a victim. She has to try and outwit the sinister Dr. Kurs, who almost tries to manipulate her as a character in a novel.

In this book - the second in the series - Agatha is much more in control. She is the central investigative figure, driving the novel forward in order to solve a series of murders. 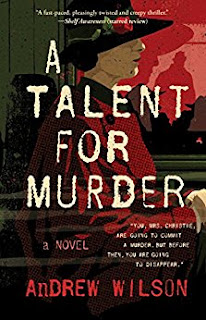 Q: What do you think Agatha would think of these novels about her?

A: I hope, if she were to read them, that she would take the novels in the spirit they are written - as a kind of homage. I’ve always been a huge fan, but I didn’t want to write a pastiche or a parody.

Although she is the central character, they are written for the sensibilities of a 21st century reader. I hope they have psychological depth of character as well as the kind of gripping narrative that Agatha herself would be proud.

A: I’ve just finished the third in the series, Death in a Desert Land, which is set in Iraq, a place where Agatha visited in real life, by herself in the autumn of 1928. She is sent out to Iraq to investigate the suspicious death of the famous explorer and writer Gertrude Bell, who died in Baghdad in 1926.

From Baghdad, Agatha travels to Ur, in southern Iraq, a journey we also know Christie took in real life, to visit the archaeological dig in ancient Mesopotamia. That mystery is set for release in the UK and US in spring 2019.

A: The series has been optioned for TV by Origin Pictures, the company behind Death Comes to Pemberley, Woman in Gold, and The Sense of an Ending.

--Interview with Deborah Kalb. Here's a previous Q&A with Andrew Wilson.
Posted by Deborah Kalb at 6:59 AM